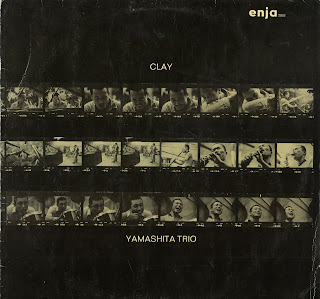 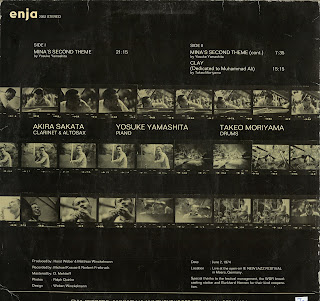 Life's full of coincidence, isn't it? Yesterday I downloaded this album from the blog and listened through it. Today I dropped by a second-hand store and found it to my great surprise. If that wasn't enough, discovering that there was a scanner at work that could accommodate lp size covers was reason enough to make a post out of it. This was slipped into the comments section of the previous Yamashita trio post by pablo who digitised his own copy of the lp. No point in me replicating those worthy efforts.

Listening to this, I'm amazed at the sheer energy and stamina of these three musicians. Keeping it going at full throttle for well over 40 minutes is no mean feat and there is an intensity and an underlying sense of violence which is scenically captured in this You Tube film excerpt:

Heady stuff in other words and a source of inspiration for a younger generation mixing the in your face attitude of punk and rock with the abandonment of free impro. Perhaps no wonder that Sakata has recently played with the Scandinavian power trio The Thing. Mads Gustafson is a huge admirer, which shouldn't surprise anybody listening to these tracks.

Thanks for all this rare Yosuke

Thanks for this! For what Sakata is up to these days, see this video I shot last month in Tokyo:
http://www.youtube.com/watch?v=KXwO5Ho5XN8

Another beautiful YY rip. Thanks much!

thanks for uploading this one. i wanted to have it in digital form too in order not to play the LP that much. bought it a few years ago at 'a strange attractor' record store in athens when during discussing with nektarios who runs the store was mentioned a free jazz record of full energy to listen. grabed it as it was in sight and upon listening bought it immediately. without knowing at the moment that sakata was also behind the legendary experimentalists wha-ha-ha (http://www.discogs.com/artist/Wha-ha-ha) realized it afterwards!
keep up the great work!
nicolas

Hi kinabalu, could you please re-up this too, thanks a lot