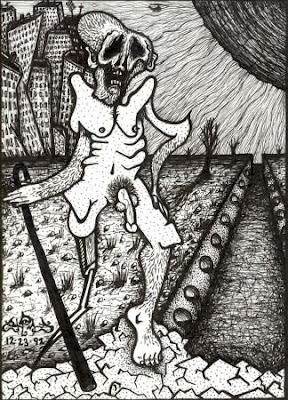 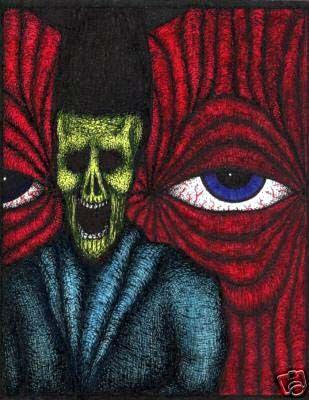 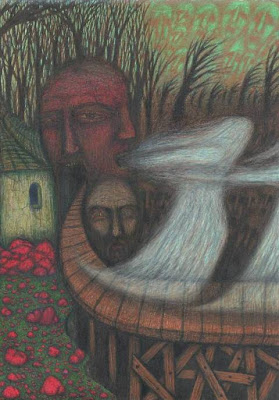 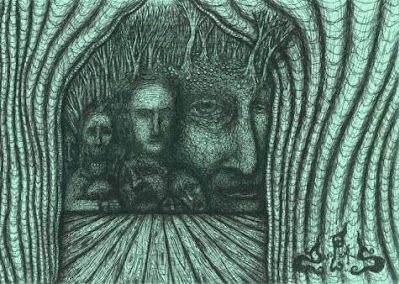 ive been in a few group shows with damien,though weve never met.
http://www.artofimagination.org/Pages/Michaels.html

heres another, upload by 'boromir' by request
this album has also appeared on the mutant sounds
blog,but many people including myself were unable to open one of the files. 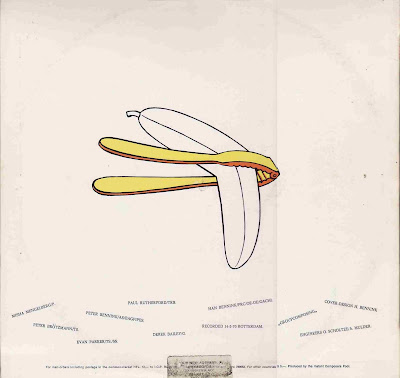 so here it is again, unlikely that this will ever be reissued, the master tapes of this and other I.C.P,releases have apparently been lost. 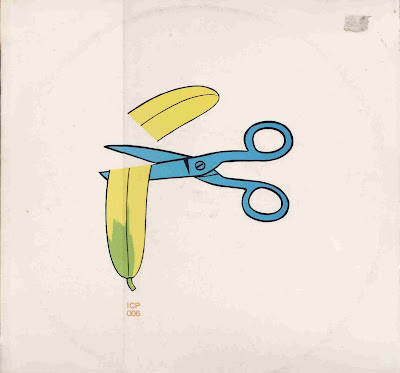 heres a review by none other than eugene chadbourne.

The name Instant Composers Pool has become synonymous with the extended ensemble of Misha Mengelberg, closely identified with both his compositions and his amusing outlook on life. These associations mean the use of the name in conjunction with this early-'70s recording may wind up hiding a crucial and astonishing document of group improvisation. The German, Dutch, and British scenes come together for this extended piece of music, spilling over two sides and titled simply "Groupcomposing." The players featured are some of the most famous and well respected from these countries, interacting in a hustle bustle of energetic attacks and contrasting moods that is bound to make fans of the European free improvisation scene jump up and down, and why not since the people downstairs are probably already horrified. Some of these listeners, again, think Instant Composers Pool and imagine written charts, somewhat similar to what Willem Breuker cooks up. This album is much more like the acclaimed Topography of the Lungs release from roughly the same era, and in fact that album's three participants are all on hand here: Derek Bailey playing electric guitar with a tone that will make listeners want to raid the fridge, Evan Parker demonstrating how to play frantically and subtly at the same time, and Han Bennink approximating a windstorm on percussion, all fairly well recorded for this period. Mengelberg is also more on the case than he often is in these types of settings — he uses space, but does more than just sit back smoking and watching the others freaking out. Paul Rutherford is great on trombone, and so is the drummer's underrated brother Peter Bennink on both dangerously addled alto saxophone and preposterous bagpipe. Followers of this admittedly very challenging music all have their favorite events where the music just seemed totally inspired, one startling scenario developing after another on-stage. That, boy howdy, is just what this record is like.

Vinyl ripped at 224 kbps Scans attached, though cover's rather bland.
i couldn't agree less, i really rather like this cover,i assume its designed by bennink
buy other icp albums here
http://ssl.adhost.com/jazzloft/baskets/pos.cfm?CD=1548

heres another upload by 'boromir' 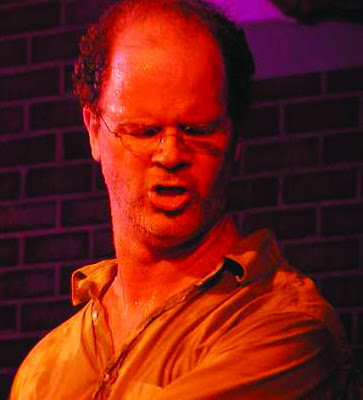 heres a spiel, from the all music guide
Free jazz drummer Whit Dickey first stepped into the spotlight as a leader with the release of his Transonic album from Aum Fidelity in 1998. Two years later, Wobbly Rail issued his Big Top release. Previously, he was best known for his solid work with Matthew Shipp and David S. Ware, with whom Dickey split in 1996. Early the following year, the drummer began composing the works that would be included on Transonic. Dickey penned all but two songs, "Kinesis" and "Second Skin," on the collection, and he even had a hand in those with the help of his fellow musicians on the album. The original compositions give a nod to the influence of "Criss Cross" and "Off Minor" from the legendary Thelonious Monk. Dickey recorded the album with the aid of Rob Brown on flute and alto saxophone, and Chris Lightcap on bass. In 2001, Dickey recorded half a dozen of his compositions with Mat Maneri, Shipp, and Brown under the name Nommonsemble, and put out Life Cycle through Aum Fidelity. ~ Linda Seida, All Music Guide
Whit Dickey Quartet live at Vision Festival X on June 17 2005
Line-up:
Whit Dickey - drumsRoy Campbell - trumpetRob Brown - alto saxJoe Morris - bass
http://rapidshare.com/files/38314775/WhitDickey.rar.htmlmp3 at 192kbps
buy whit dickey albums here-http://www.aumfidelity.com/aum005.html 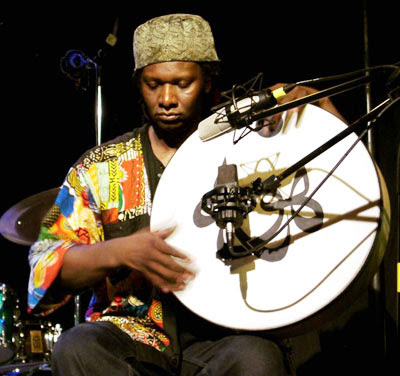 boromir, said
"We had our first new potatoes last night, variety Vanessa, which is pink-skinned. . One of the lettuces I've grown this year is called Australian Yellow Loose Leaf, and it's done very well. I have 2 main crop potatoes growing (Desiree and Picasso), which I will harvest in September (if the slugs leave them alone)"
b. 3 August 1955, Monroe, Louisiana, USA. Hamid Drake studied drums extensively, including eastern and Caribbean styles. In 1974 he began what was to be a long-term musical relationship with Fred Anderson. In the late 70s, Anderson introduced him to George Lewis and Douglas Ewart. His most significant percussion influences, Ed Blackwell and Adam Rudolph, date from this period. The latter, who was a childhood friend, became another continuing collaborator and they appeared together in numerous contexts, including Anderson's 1979 The Missing Link. Don Cherry, who Drake first met in 1978, was another continuing collaborator. Also in the late 70s, Hamid Drake became a member of the Mandingo Griot Society, appearing on the group's first album.
buy hamid drake ,albums here -http://www.indiejazz.com/page.aspx?page=ArtistDetail&ArtistID=95&p=2
Hamid Drake's Bindu recorded at Vision Festival XI on June 16 2006
Line-up: Hamid Drake - drums, tabla, frame drumsDaniel Carter, Sabir Mateen: tenor and alto saxophoneErnest Dawkins - tenor and alto saxophones, wooden fluteGreg Ward: alto saxophone, clarinet
Set list: Meeting and Parting,
Improvised Piece
http://rapidshare.com/files/38300543/Bindu.rar.htmlmp3 at 224 kbps
photo of hamid drake by frank rublino, from "drummer world" 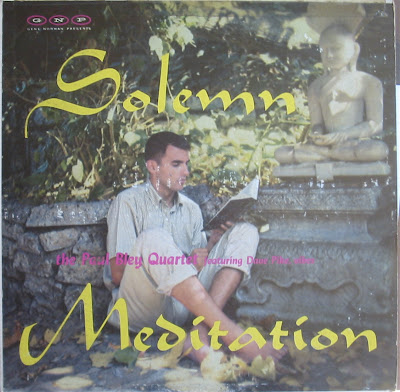 a generous friend , wishing to contribute some , very rare unreissued vinyl, brings you....

paul bley-solemn meditation
(1958) GNP
this legendary record, was cut shortly before ,bleys legendary hillcrest club residency, which alerted (so some assert) the broader californian public to the existence of ornette coleman and don cherry.every one knows the story of how pike was sacked to make room for don and ornette.

this is the recorded debut of both dave pike and charlie haden.

a lovely record that i have known about but, never seen.
its firmly ,rooted in postbop language.
the playing's as wonderful as you'd expect but the real revelation here for me is lenny mcbrowne's drumming, which is subtly inventive throughout,other than this ive only previously heard mcbrowne on acouple of fairly drab ,organ funk dates from the mid sixties

theres so much dave pike being reissued especially on heavy 180 gram vinyl, its a wonder it hasnt been reissued for commercial reasons alone.
let alone because bley and haden are such pervasive contemporary influences.

my friend ,aint no trophy hunter
so be warned this and the record which follows have been well loved, and are probably going on 40years old 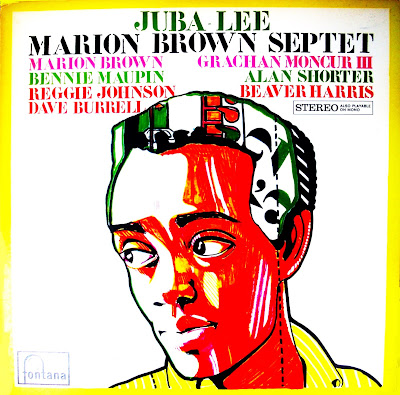 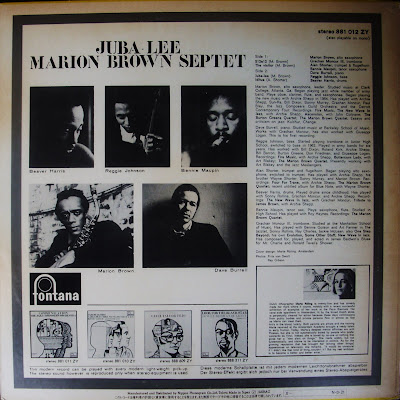 hi, Marion Brown's jubalee has been one of the most downloaded items here, some one mentioned that the file ho link from feburary is no longer active it appears the earlier file ho links have been trolled.
i dont know why, the records are all OOP, and have been for years.
with little prospect of being reissued.

for archival purposes ive reuploaded this in FLAC, 3 files ,you need all three to unzip. 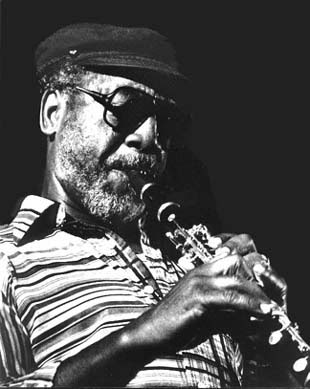 heres a great little concert, featuring unrecorded compositions by the great african american trombonist composer- george lewis, what a terrific line up, TOO this is an american radio broadcast from 5th of november 1978
george lewis-trombone john carter-clarinet bobby bradford -tpt
just two tracks 1) shadowgraph 5
2) player.
ive ripped it to both FLAC and mp3-192
(FLAC VERSION IN A SPLIT FILE,YOU NEED BOTH!) for those who want quality ! both files= 180 meg

heres the mp3 at 192 for those who dont mind the slightly flat sound and or have slow connections.
mp3 192 http://anonym.to/?http%3A%2F%2Frapidshare.com%2Ffiles%2F36279322%2FG_L_L78_MP3.rar
the above photo of lewis ,is by oscar henn,hope he doesnt mind,it was one of the few shots of george in action.
also heres george lewis' site at the columbia university music faculty ,for those unfamiliar with
mr lewis work
http://music.columbia.edu/faculty/lewis.html
buy george lewis discs, there are many on black saint, sackville, andmusic and arts.

thanks to flux'us for his last couple of posts and some much needed help.

i woke up this morning to an email from mr lucky of border music and cineville, sadly his extraordinary blog is no more, lucky is calling it quits , lucky taught me the rudiments of blogging, how to open accounts, use a file host ,etc
i shall miss him.

I thought it better to make a post of this,
rather than link it in the comments!

For anybody who liked this album,
here is a link to Pine Ear Music.
Where you will find 6 free; album length downloads!
Including 2 by Jack Wright

From the Web Site:
“Pine Ear will release a new album-length project
every month in 2007 via free download.
Check and refresh this page monthly to download the latest updates.”
!!!GO GET E'M!!!
http://www.reubenradding.com/12.html 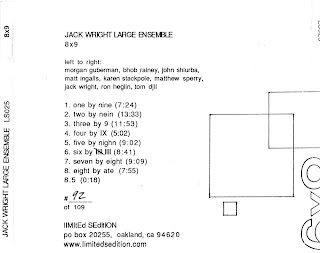 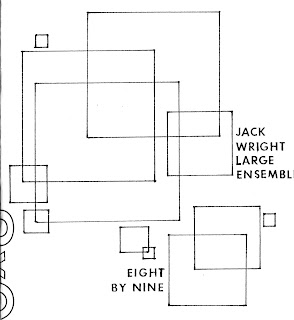 this item has sold out and its this small cottage operations policy, never to reprint titles once they're gone.

guitarist john shiurba runs the lable, hes best known for having performed and recorded with the likes of anthony braxton and gino robair.

of the players here ,fans of this sort of thing will have heard of jack wright,whom i first became aware of through a couple of duets with italian percussionist andreas centazzo,those performances were from 1978-9.

bhob rhainey is also reasonably well known to people as i recall, his first major appearence was on the 1971 america record 'emergency' i may be mistaken about this ,i no longer have that lp, hes been playing a lot of improvised music in the last few years.

as have most of the people on this disc.

mathew sperry is ,possibly unfortunately best known for having played on a few tom waits albumsNOT THAT THEY ARE NO GOOD, it's simply obscured some of his fine achievments as an improvisor, these include a couple of fine discs of double bass solos, WHICH ARE STILL AVAILABLE FROM LIMITED SEDITION!. sadly sperry passed away a few years ago.

i confess that i know even less about the other performers ,though percussionist karen stackpole appears on quite a few other limited sed, discs that i posess.

BUY THE CDR'S ,AT $10 ITS A STEAL AND WILL ENABLE THEM TO PUT OUT MORE GREAT STUFF

ripped at 256kbs mp3, in 2 parts including scans

once you grab this righteous slab, youre sure to aquire a taste for more, its an affordable habit.