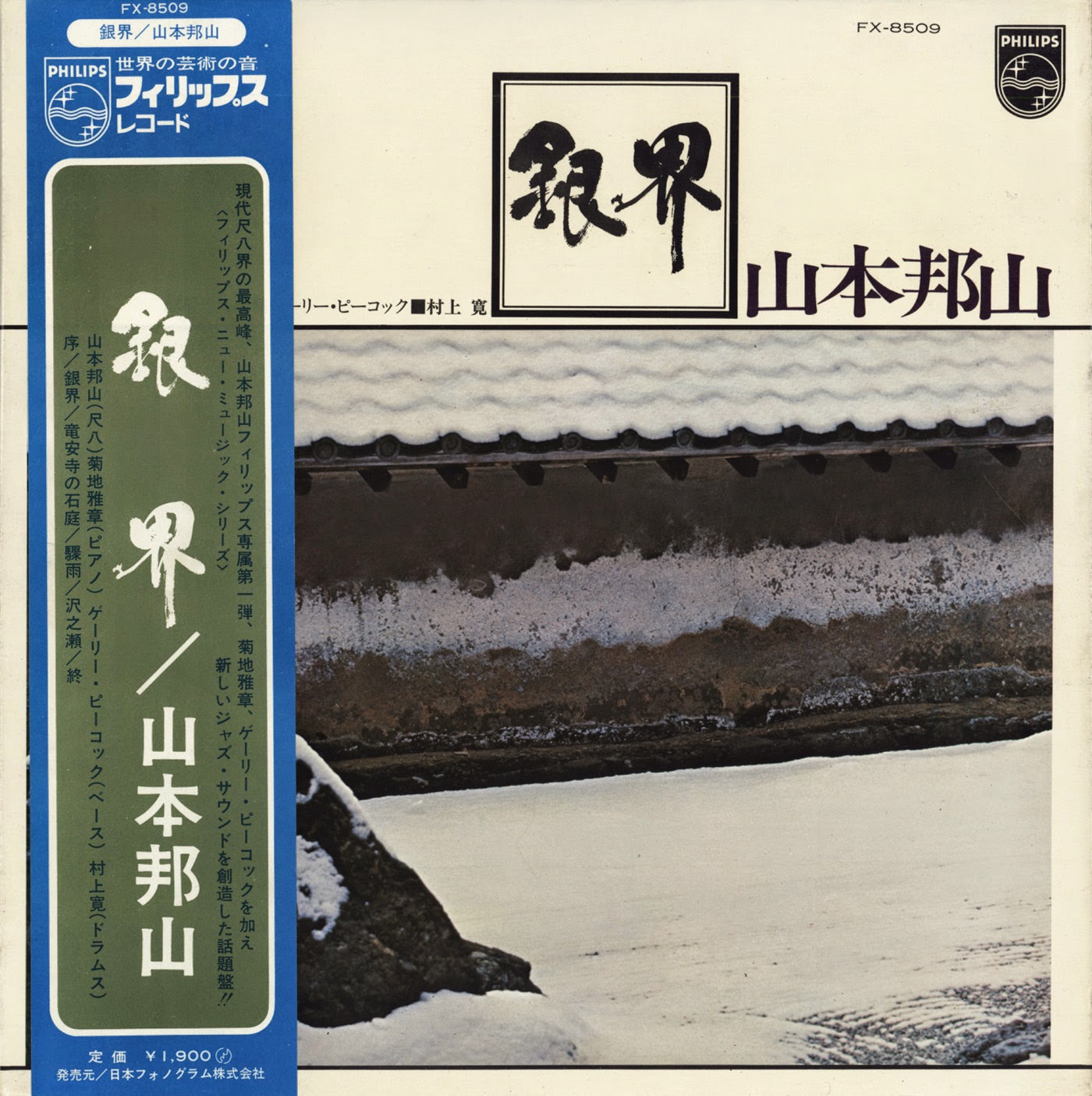 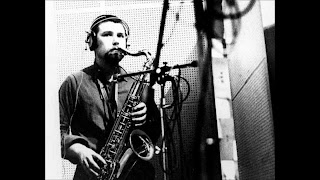 
We had a request last year for Rhythmbox 1 and 2, live recordings featuring Peter Brötzmann, Fred van Hove, Han Bennink + Alfred Mangelsdorff, recorded and broadcast roughly mid-70s. Searching the archives, I came up with this 68-minute set from Quartier Latin, Berlin on 31 October, 1973 which definitely is live, has all four with Mangelsdorff popping in rougly mid-way through, and as was mentioned in the request, sounds like a professional recording suitable for airplay. Whether it is the one that was requested, I have no idea, but if anything, it's a pretty good substitute.

Having listened through it once, I'm not sure if this is jazz or whether there is anything avantgar(d)ish to it. To these ears, it's primal, pre-civilisational sound-makiing with the pianist trying to inject a bit of civility to the proceedings without really succeeding. So here we have two resident wildmen who could be shamans from an unspecified location in Siberia, trance masters from the Atlas mountains or thereabouts or just frolicking though the wilderness of Schwarzwald, playing what's there (which they eventually did): And there's a lot of homour in this, primal sceams courtesy of Bennink and Mangelsdorff.blending seamlessly into the general mêlée. In other words, whole lotta fun! To be enjoyed without hesitation! 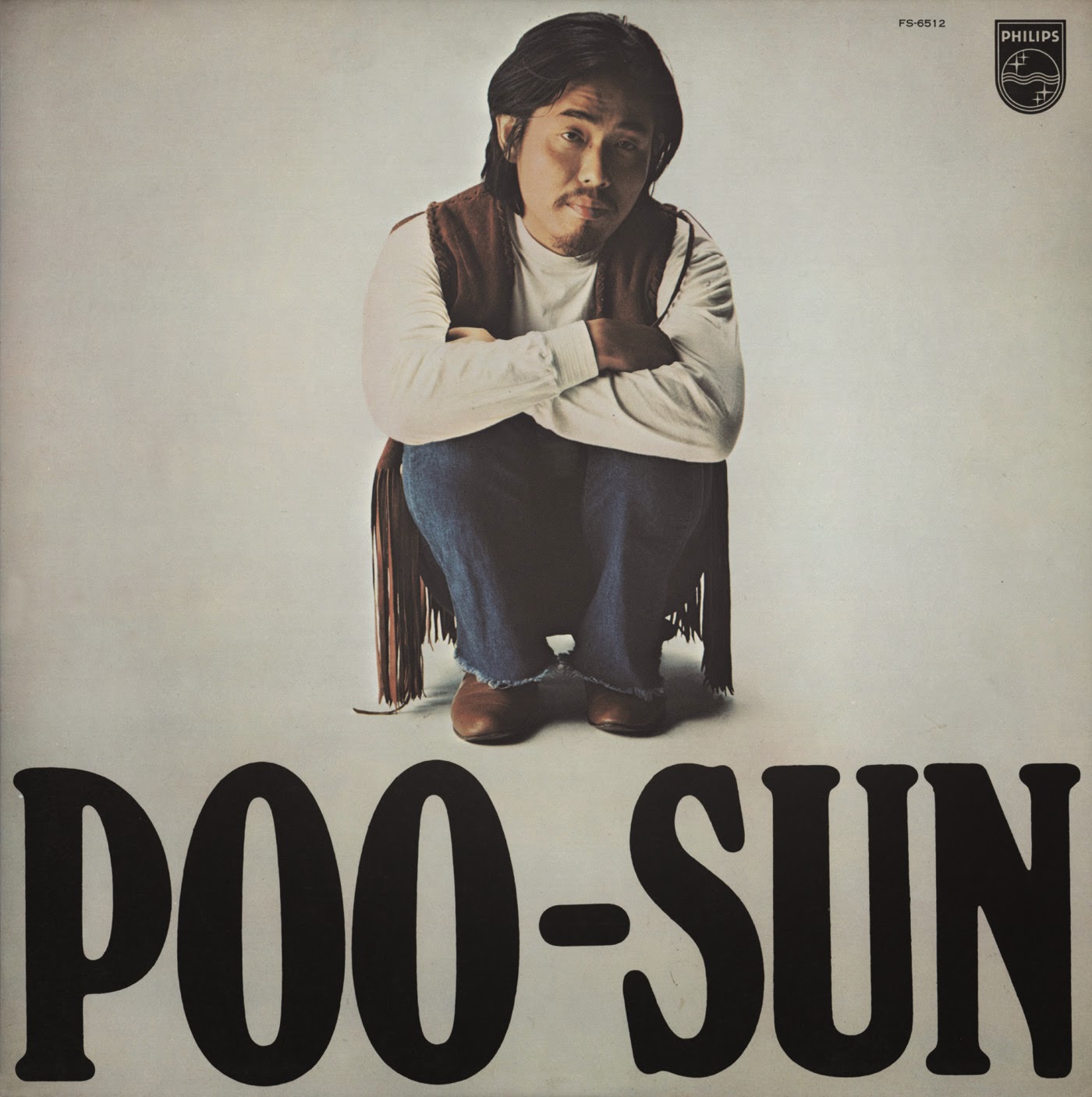 A1. Dancing Mist
A2. Thanatos 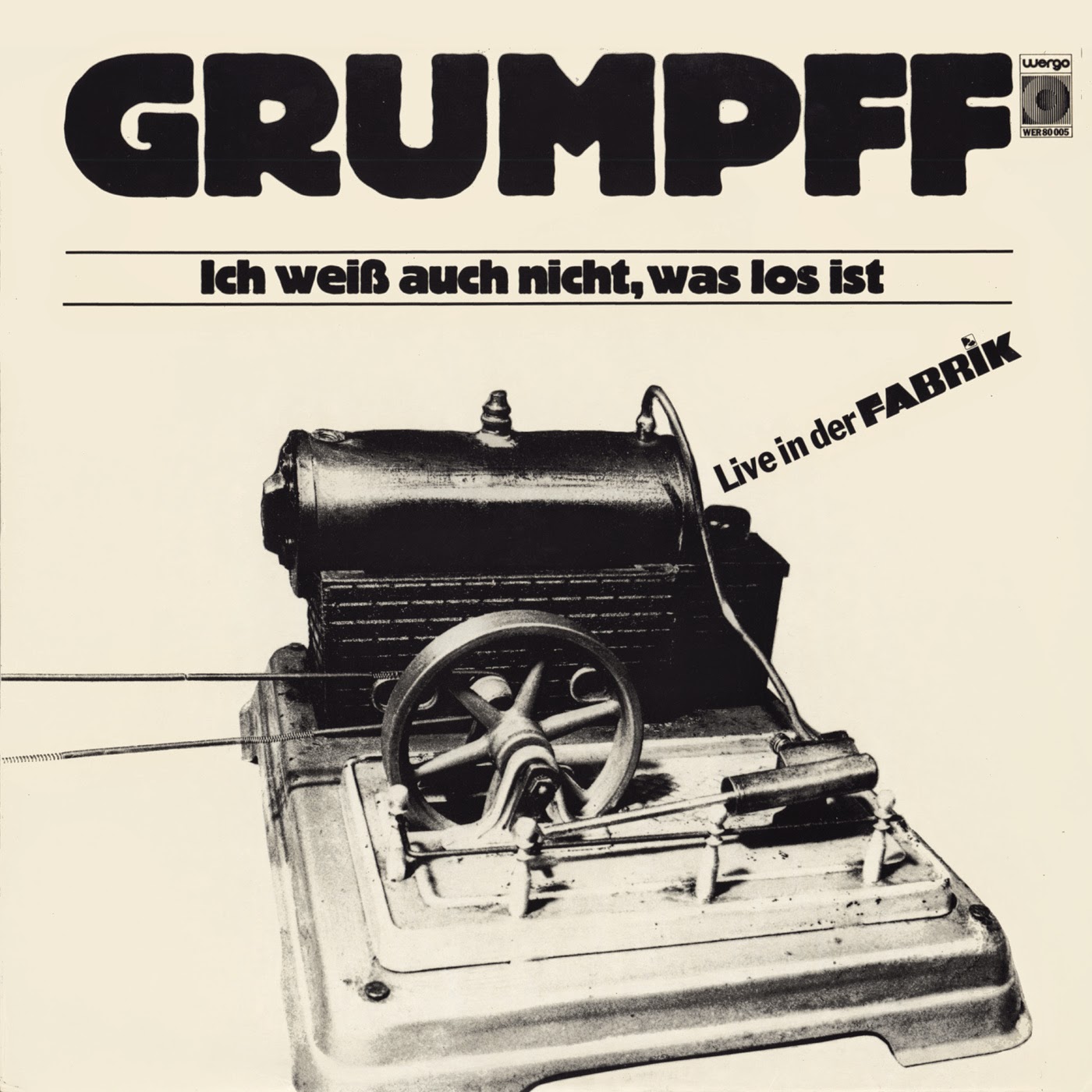 
Recorded at the New Jazz Festival, Hamburg, on 21 October 1979 at the Fabrik 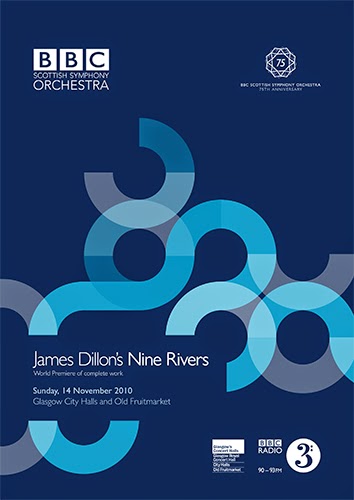 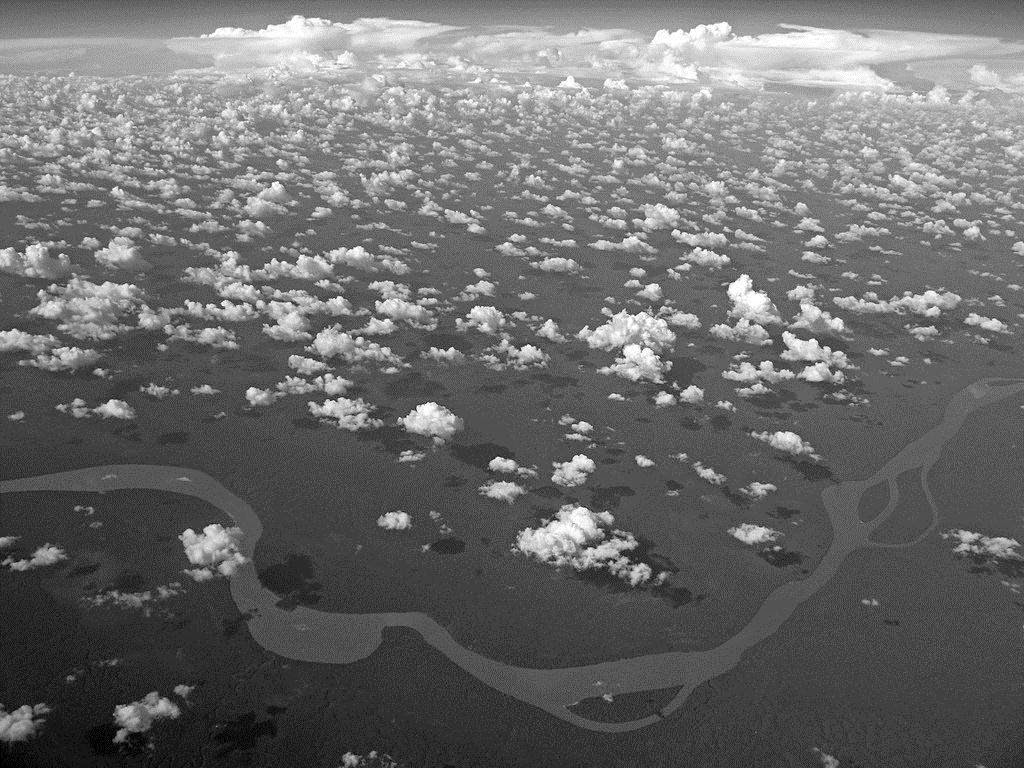 James Dillon worked on the pieces that make up Nine Rivers from 1982 to 1999, but it was only in 2010 that all nine were performed together. I think there have been at least two subsequent complete performances, first in New York and then in Holland, but this is my recording from BBC Radio 3 of the November 2010 performances in Glasgow.

The music has depth, power and range; its influences aggregate like tributaries - Messiaen, Stravinsky and Bartok are obvious - and voices from jazz and popular music can also be heard (I'm sure I can hear Talking Heads in La Coupure), but it also carves its own distinct path. It's surprising that this has not been issued commercially, and if there are plans to do so, please advise in the comments and the links will be removed. 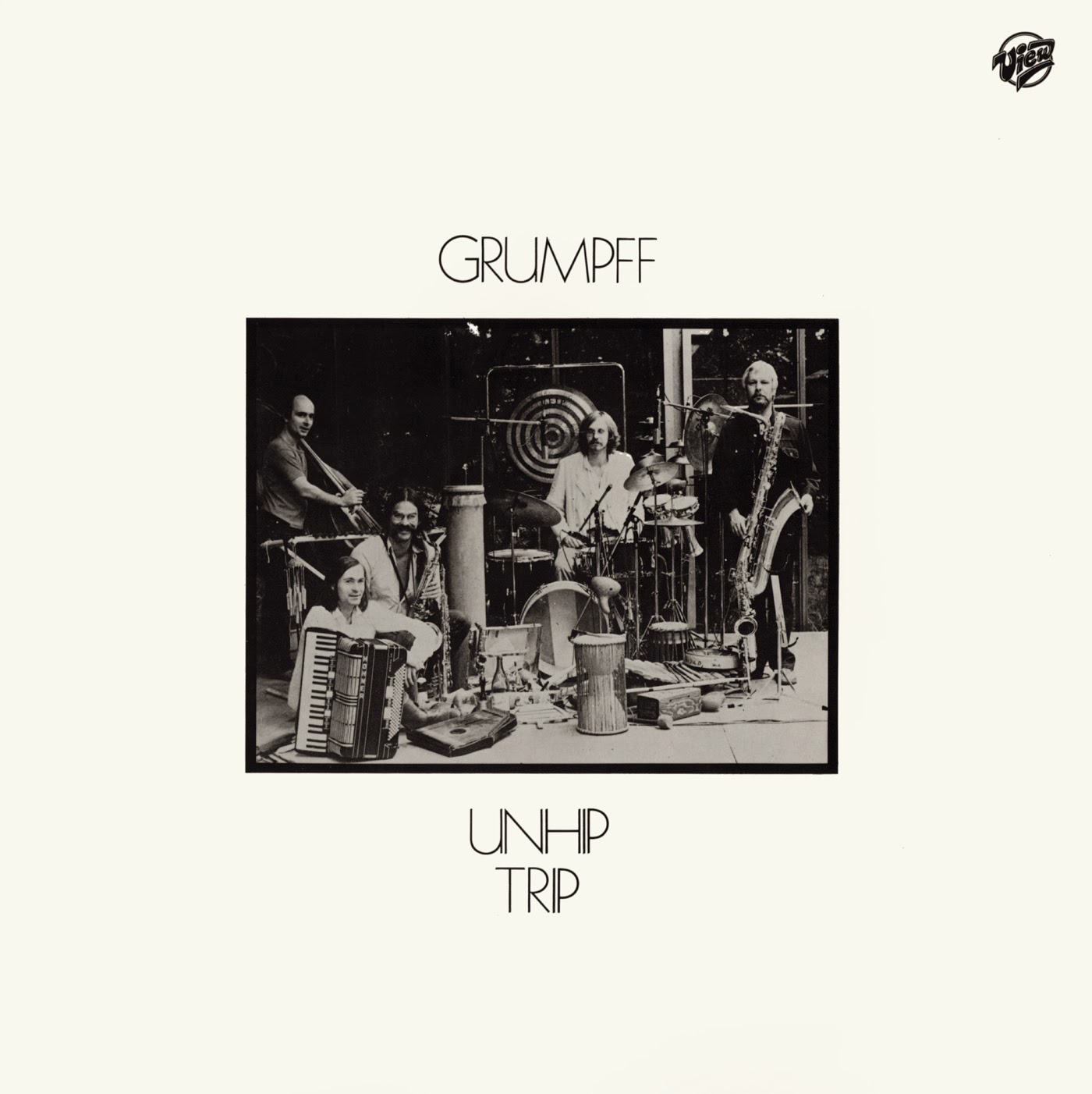 A1. Launeddas
A2. Bye Bye Wilhelm
A3. Glawis Traum
A4. Nuraghe There's also an encore, which I think is one more of Boulez's Notations, but I can't place it at the moment so any help in identifying this would be appreciated. 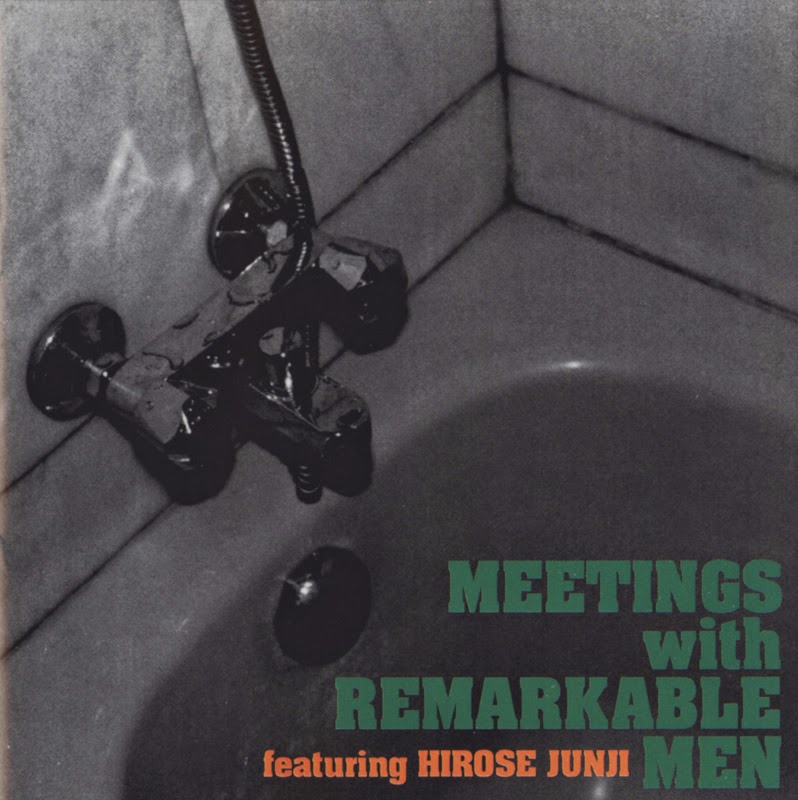 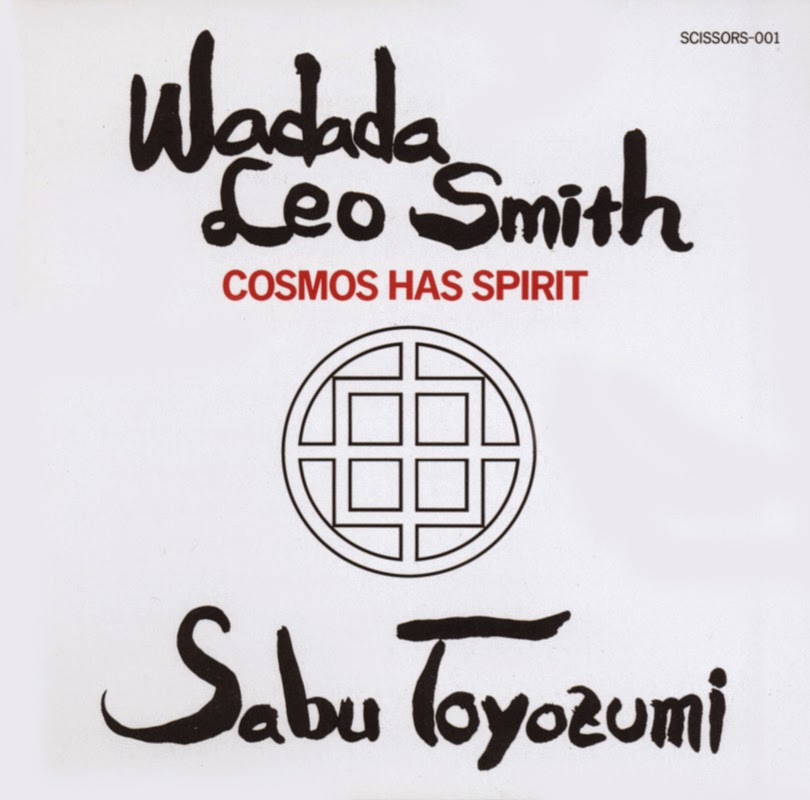 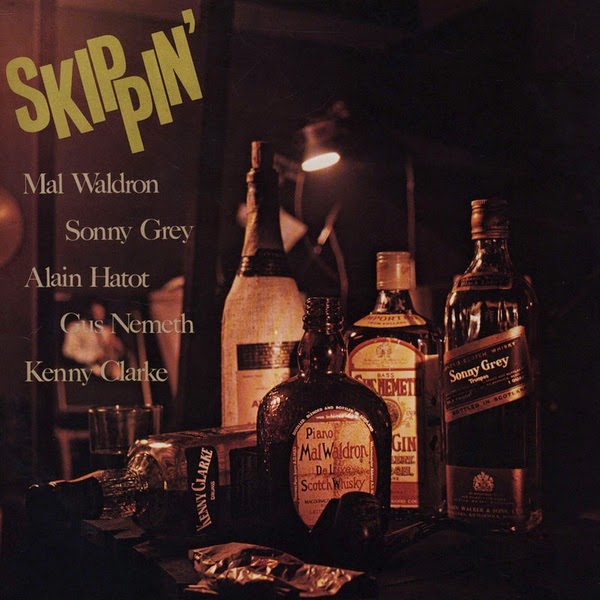 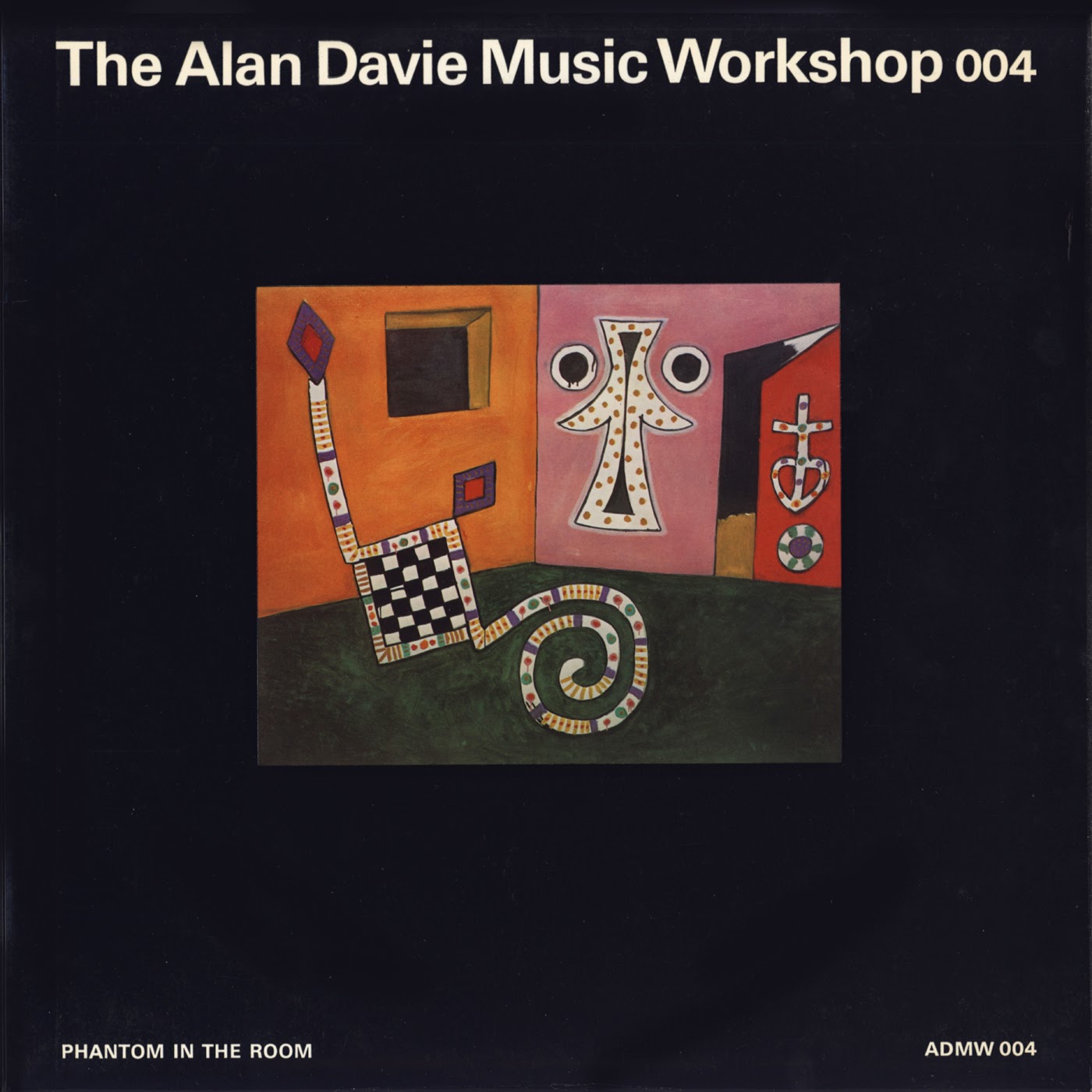 B. Conclusion And Encore 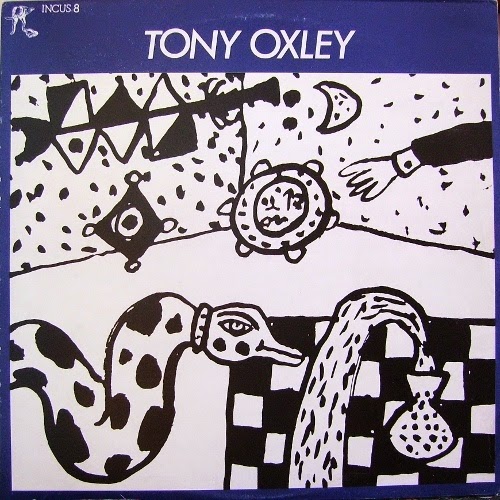 most of the tracks are solo percussion and electronics,a couple feature ensembles with the usual suspects,derek b ,barry g
,paul r,etc.


this has remained sadly unissued for some inexplicable reason.


its a very rewarding listen guaranteed to reverse


any received opinion /assumption you may have about solo percussion being boring.


oxley also happens to be a visionary painter and graphic artist of some note.

here is some biographical info about oxley from the european free improvised music website.

Born Sheffield, 15 June 1938. Drums, percussion, violin, electronics.
Tony Oxley, with Derek Bailey and Gavin Bryars, created one of the foundations of free improvisation in the UK through their explorations in the group Joseph Holbrooke. A detailed retrospective view of Joseph Holbrooke can be found in Bailey (1992, pp. 86-93) but, briefly, the group existed in Sheffield from 1963 to 1966, initially playing conventional jazz though by 1965 playing totally improvised pieces. The fact that the three were 'isolated' in Sheffield from developments elsewhere (John Stevens and the SME) provided an ideal environment for experimentation and development. After that the participants moved to London, Oxley becoming the house drummer at Ronnie Scott's while all the while continuing with experimental music. He was in at the beginning of the Incus label with Bailey and Evan Parker and some of his work for that label is recognised as landmarks in the development of free music. He also appeared in various (early) versions of the London Jazz Composers Orchestra
In the last 25 years he has performed and recorded in an extremely wide variety of situations, from those where an emphasis on time-keeping is important to free situations with perhaps Paul Bley at one extreme and Cecil Taylor at the other. His work with Taylor, as a member of The Feel Trio with William Parker, in duos, or augmented with other musicians (such as the quartet of Taylor, Oxley, William Parker and Derek Bailey for two concerts in London and Manchester in 1991) lasted from 1988 to 1991 and can be seen by the viewing a selection of their concert schedule.
In recent years Tony Oxley has run his own Celebration Orchestra, worked with Bill Dixon - both are painters as well as musicians, and there have been plans for multimedia presentations - and with the Austrians, violinist Andreas Schreiber and pianist Dieter Glawischnig in the trio Cercle. This group briefly toured the UK in 1997 (having played the Beijing Jazz Festival in October 1996), with displays of Oxley's paintings, and had a broadcast on BBC Radio 3 in May 1997. Oxley has also begun to work again in duo with Derek Bailey, playing, for example at the Knitting Factory in New York in September 1995, in London in November 1995 and in Vand'Oeuvre in France in May 1997. He also remains in demand to bring unconventionality to conventional settings, particularly with his 'rainforest percussion', playing for example, on ECM recordings with Paul Bley and John Surman and with the Tomasz Stanko Quartet.
His kit is highly individual and an early version of it was described by Derek Bailey (1992, p. 101) thus:
'The acoustic part is: drums - eight, various sizes and texture; cymbals, fourteen, various sizes, thicknesses, weights, sounds; cowbells - five, from six inches to sixteen inches; wood surfaces - five, wood blocks and oriental skulls; saucepans - two. The amplified section of the kit is: amplified frame containing cymbals, wires, various kitchen equipment, motor generators, springs, used with 3 contact mikes (home-made), 2 volume pedals, 1 octave splitter, 1 compressor, 1 ring modulator and oscillator, 1 amplifier and two speakers.'
More recently the whole kit has been slimmed down and the electronics have (probably temporarily) been put to one side, but the playing, of course, remains individualistic. A transcription of an interview with Oxley, where he discusses his current kit (1997) with Alyn Shipton in a BBC Radio 3 Broadcast is available, complete with sound clips.
Tony Oxley is also a painter and three pages of his paintings can also be viewed: Paintings 1 or Paintings 2 and Paintings 3. 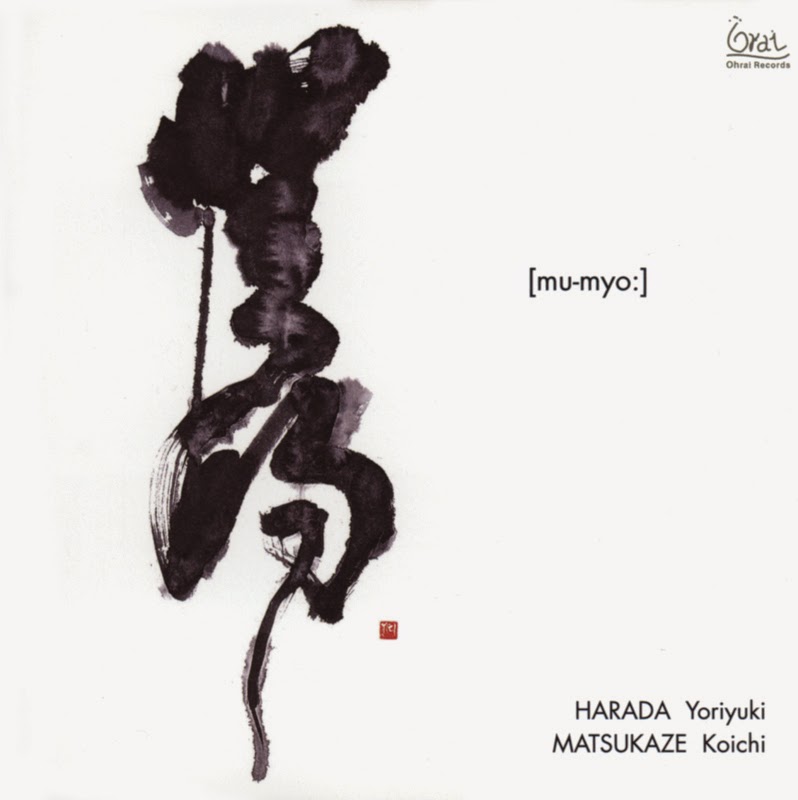 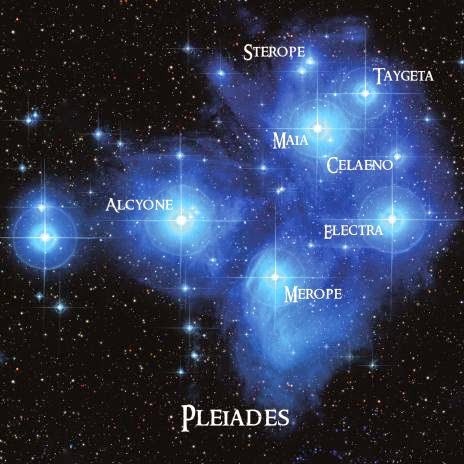 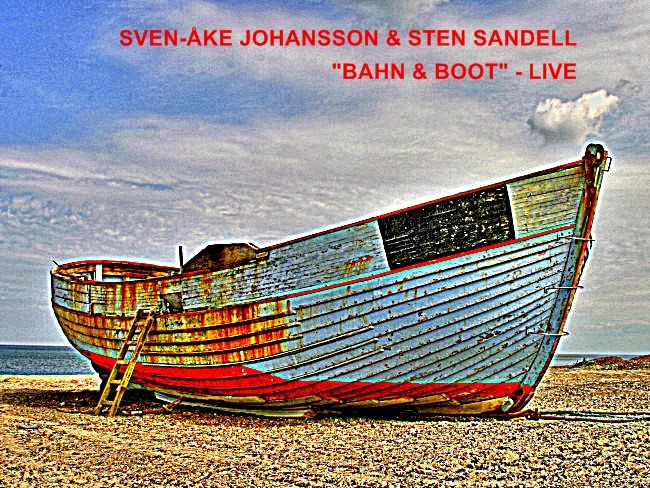 A shorter recording from a duo which released a long OOP Mini-CD in 1997 - see here.
Sung/spoken or better a kind of 'Sprechgesang' similar to Schönberg's 'Pierrot Lunaire'.
At least that's how I tend to hear Sven-Åke Johansson's vocal utterances.
Text is in German - but the sounds might be enjoyed anyway.


Recorded in Ulrichsberg, Austria during the 'Kaleidophon' in May 1998 This album is dedicated to Jimmy Lyons. 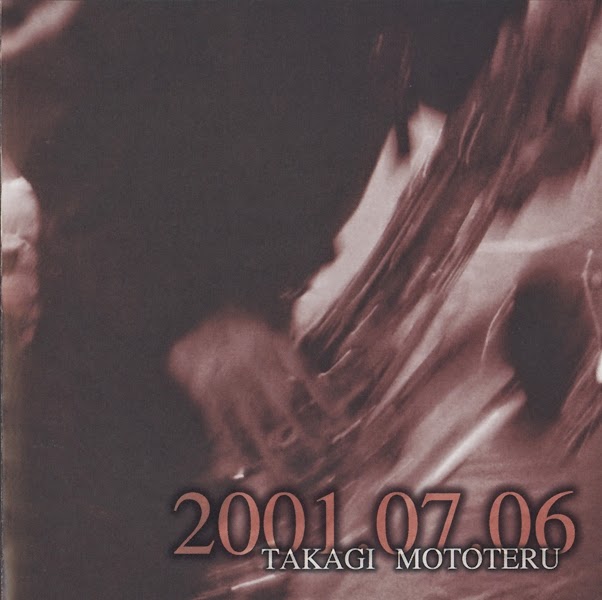 
Recorded live at House of Crazy, Toyohashi on 6 July 2001 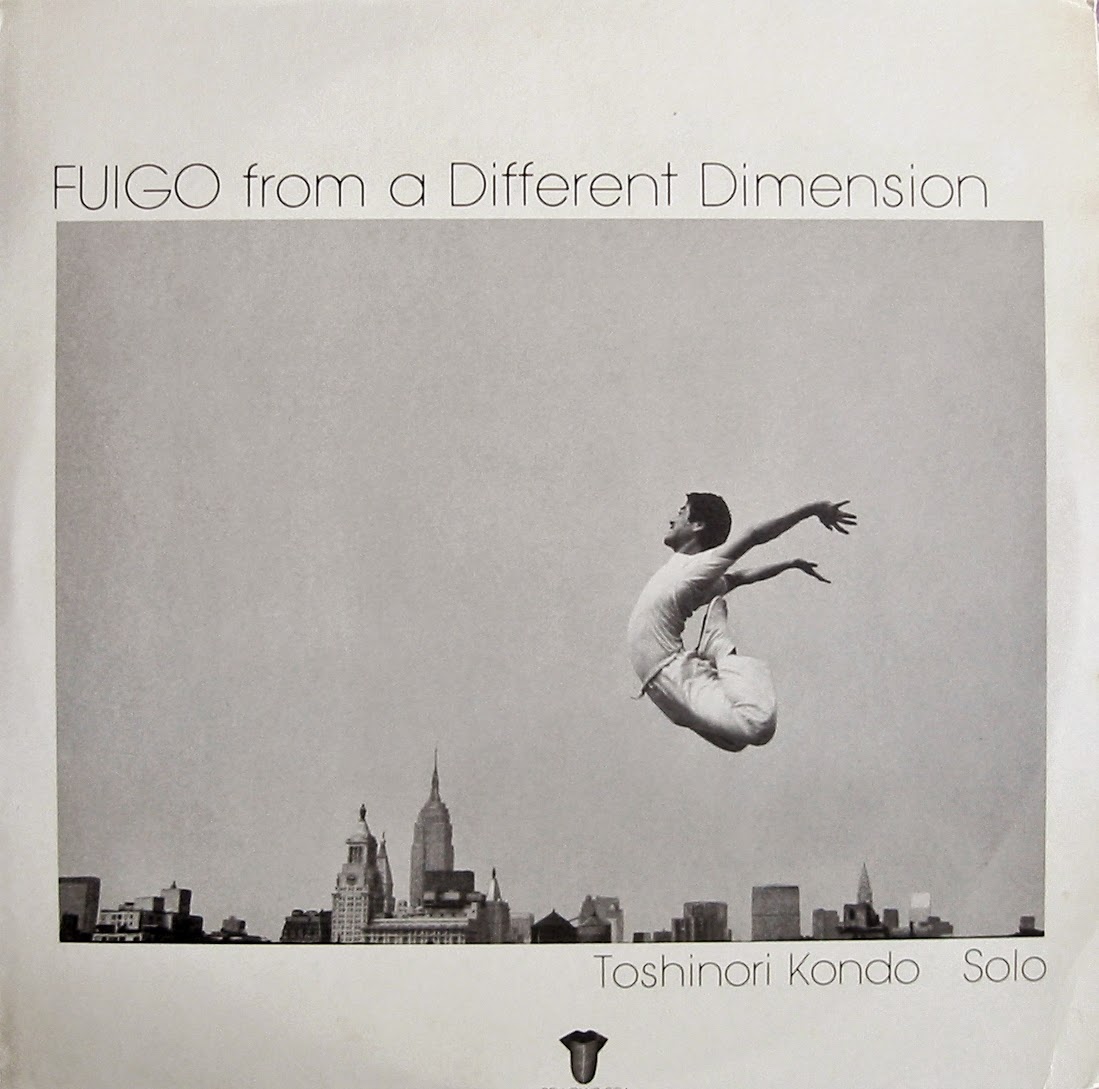 For some fine text about this album go here -
This rip has been done some years ago but was not posted here - as it was posted then there ;) 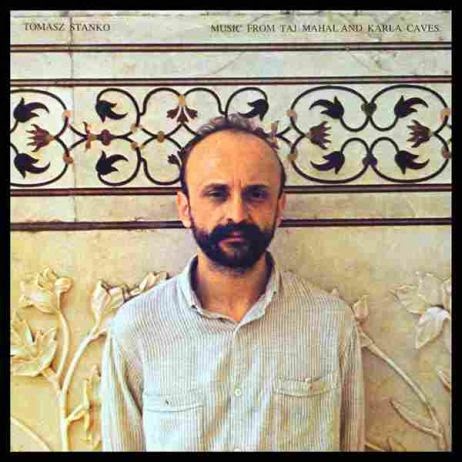 This solo one was rescued by mew23 from old Almost Black blogspot. Thanks. 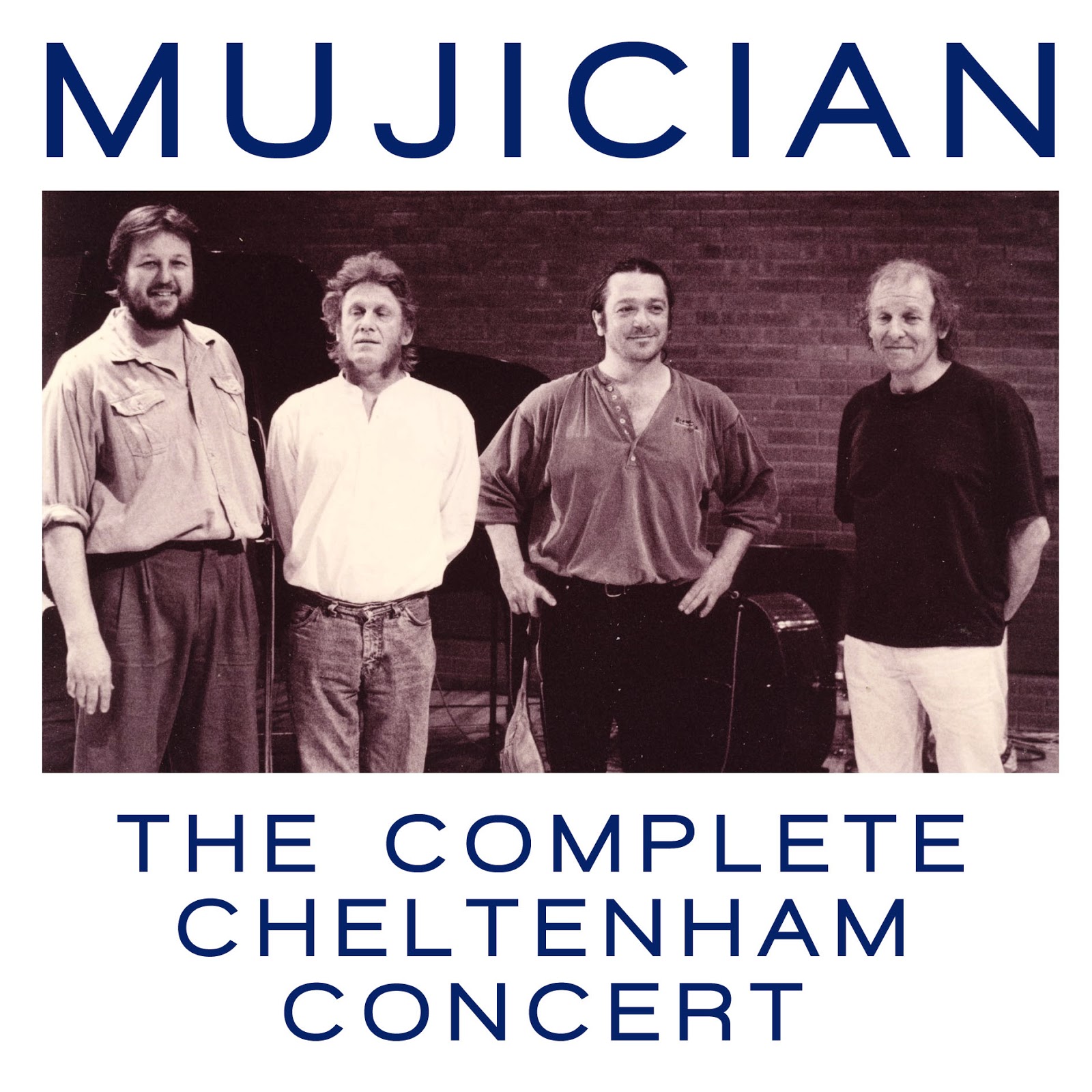 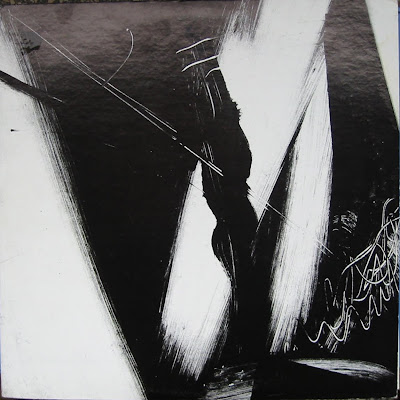 Saw my rip reposted on another blog  - might be interesting for our followers as well..

Below is what I wrote in December 2010 (a few days before New Year):

This one was a real discovery when I got it some weeks ago. I knew Art Brooks only from his work with Bill Dixon and from the last Collective 4tet "In Transition" on Leo, which - by the way - is excellent.
This is not the work of a "mere" student but the entirely realised and idiosyncratic composition from a still unsung master. I love it.

Lend your ear to the "Nightcaller". 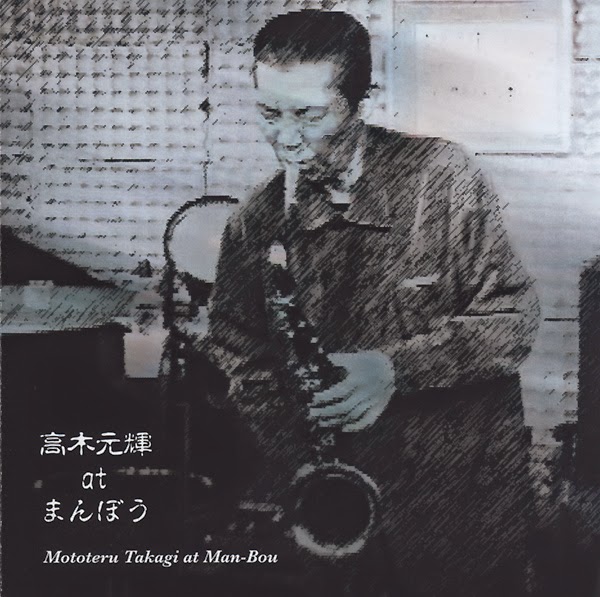