There seems to be a worry in recent comments that RapidShare links have disappeared. Actually, they haven't. RS has unilaterally imposed a cap of 30 gb downloads per day on paid accounts and one - 1 - gb per day on free accounts. So if files are not accessible, it means that the download cap has been exceeded for that day. Downloaders are advised to try again the next day or until the files are again accessible. We don't like it a bit, but that's the way the ball bounces with this file server business. As they say, sorry for any inconvenience caused, but don't blame us, please. 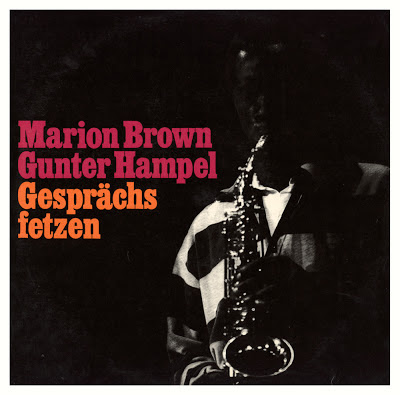 I got this rip from Nick already in January - finally for you to enjoy a shred of early Free Jazz made in Europe.
The title "Gesprächsfetzen" means shreds of conversation. 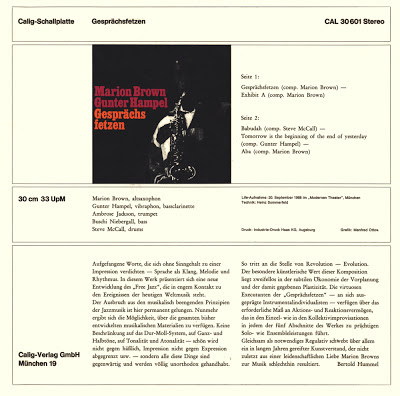 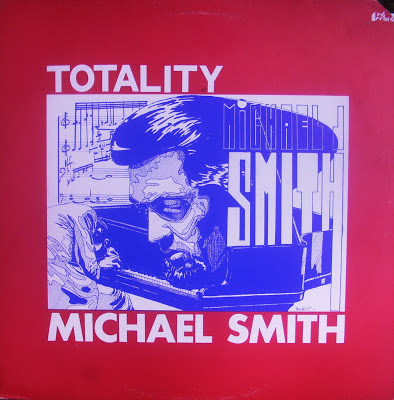 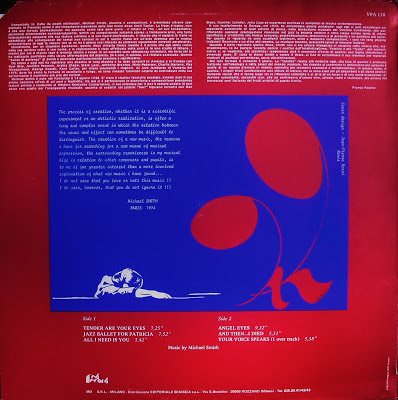 Smiths Early work ,was hugely idiosyncratic and Ambitious, and we here at IS love it  feeling that it has been unjustly eclipsed.
, This one though very good is perhaps a little low key, rather introspective and slightly meandering in over all tone by comparison to the group sessions we have previously posted...

Here we have a leisurely stroll through a couple of bare bones ballads and a few originals , featuring Smiths own unique, often stark variations on standard tunes , treated in a way which t is similar in many respects to the free floating way an Andrew Hill, a Howard Riley or a Paul Bley  handle a tune like angel eyes.

there is an unsettling rather frayed romanticism at play here, bitter sweet and  fractured.
Angel eyes is a stand out performance , its a tune i love ,which like Nature Boy, has a mysterioso , slightly ironic under tone,perhaps  prefiguring some profoundly unsettling pathos hovering just beneath the surface ripples..of our fragile ,shaky  albeit painstakingly constructed & ultimately delusional senses of self.

sadly at present there appears to be only one recording featuring Smith as a (co)Leader currently available
A wonderfully intense duo with Steve Lacy, Sidelines which can be bought direct from the source here

ps...this is pretty much a straight transfer , with the volume jacked up and light declicking in a few places
there is a little surface jitter, and rumble , i  initially tried de rumbling, but wasnt happy with the resultant musical loss , so...ive left it as is 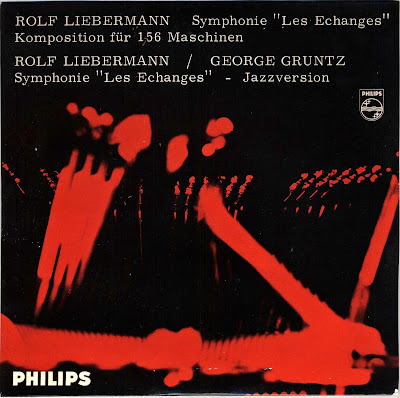 Rolf Liebermann composed this piece for the Swiss Expo (National exhibition) 1964. Scored for 156 machines - amongst which one can find 16 typewriters, 18 calculator machines, 8 accounting machines, 12 office perforators, 10 caisses enregistreuses, 8 humidificateurs-colleurs, 8 tele-scripteurs, 2 metronomes, 4 bells of signalisation, 2 entrance door gongs, 10 claxons, 16 telephones, 40 experimental signal receptors,1 fork lift, a duplicator and a monte-charge.
Rolf Liebermann was also the head of the main music section of the Norddeutscher Rundfunk (NDR) from 1957 to 1959. In this function he was responsible for instigating the famous NDR Jazzworkshops. His most popular work might be his Concerto for Jazz Band and Symphony Orchestra which was premiered by Hans Rosebaud in Donaueschingen in 1954. 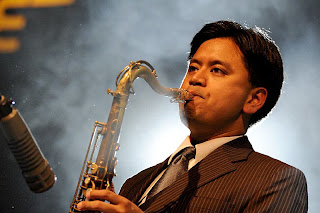 This is a take on the standard "Three Little Words", covered by Sonny Rollins, John Coltrane and others. This is a 33-minute exercise in invention, energy and incredible stamina, most of it given to a continuous solo by Jon. An even more extreme variation of the same can be found on his recent "Foxy" where Sonny Rollins' "Doxy" is literally given a full cd treatment.

A riveting performance, to say the least. This one is posted here with Jon's approval, so here we go:

Jon has just launched his own label, Irabbagast Records with two brand new releases, so readers are advised to seek them out. In my own language, rabbagast means something like wild man which may be true of his playing at times, but not true of his own personality. A very pleasant guy and a fan of my home town, so what more can you wish?

Here is a video recording featuring the excellent sax player Jon Irabagon. This was the final tune in a three-set performance at Dyvekes Vinkkjeller in downtown Bergen, arranged by Evans Jazz Club, recorded Friday 19 October during a brief tour of Western Norway. The line-up is

They did a bunch of self-penned tunes, but also some fine covers, as the one selected here, "Resolution" off John Coltrane's seminal "A Love Supreme". Jon's been regularly in town over the last few years, playing in different constellations, some local as on this night, but also visiting with Mostly Other People Do The Killing, a quartet which takes an unorthodox view of genre distinctions and which tends to name their tunes after small towns in Pennsylvania. Jon is similarly laissez faire about jazz dogma, playing inside or outside the mainstream as it suits him. 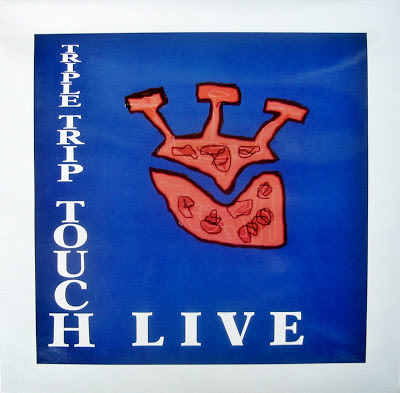 As always - decide for yourself....leave a trace. 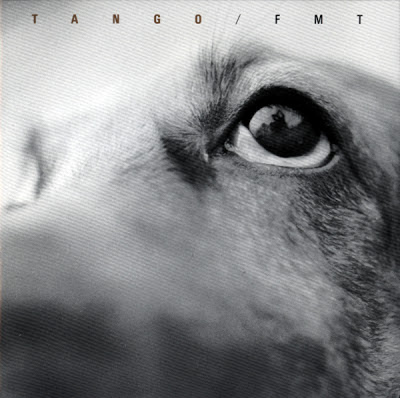 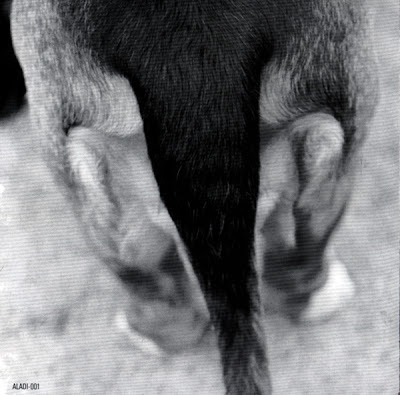 ...this one is a contribution from Nick...

Taking on board certain points raised in email exchanges/ critiques ,
that we are too focused on the old, somewhat anally fixated on excavating the obscure past ,through endlessly fetishizing vinyl objects which are the ever present talismen of socially retarded middle class white males,and their attendant painfully self conscious intellectual pretensions....(to the detriment and exclusion of the here and now , the fresh , new vibrant and important)

in that spirit here is a concert, i like very much by the Otomo Yoshide trio, a stripped down version of his phenomenal  new Jazz quartet/quintet , (with Veteran trumpteter Itaru Oki as special guest on one piece only)..

PS
I first became aware of Yoshihide through the uniquely eclectic,post Modern Noise rock of 'Ground Zero' in the early 90's, and have been a fan ever since..
Yoshihide has gone on to numerous projects , many such as Filament the unique electro acoustic improv group, with sachiko M and Yoshimitsu Ichiraku, have abandoned known formal,structural and instrumental conventions, using sine wave generators, empty samplers and no input mixing boards
to create light subtly nuanced complex pulsating interlocking drones
...
Yoshihide is also a/(THE)contemporary monster Free Jazz guitarist , surpassing in ferocity and frenetically inventive energy such obvious role models as Masayuki Takayanagi and Sonny Sharrock ..

a note to anyone who likes this, there are many available releases of Yoshihide's  currently available
this is a great place to check out items and to buy from

Other great examples of Yoshihide playing shit hot Guitar in a 'free jazz',idiom are the collaborations with the Thing (Shinjuku Crawl is killer!!!) ,on smalltown supersound, and the Amazing, O.Y,New jazz Quartet Live in Lisbon on Cleanfeed,
S
Enjoy!! 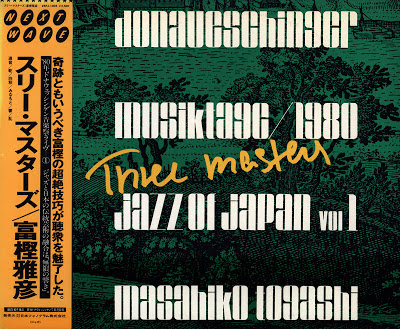 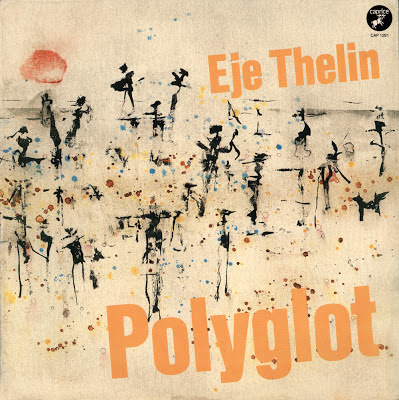 Never was sure wether I like this recording or not. Since one year I listened three times to it and still the same mixed feelings.
But Nick has send me a rip yesterday - so decide for yourself... 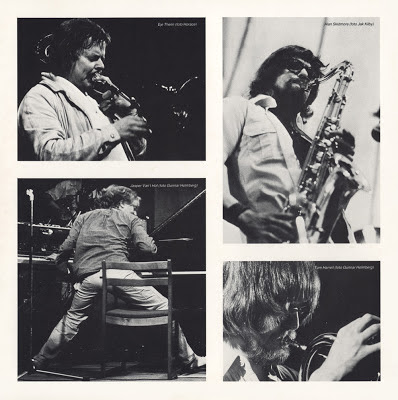 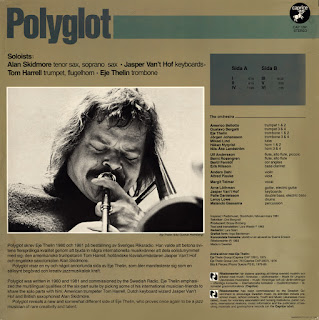 Recorded at Radiohuset, February to March 1981. 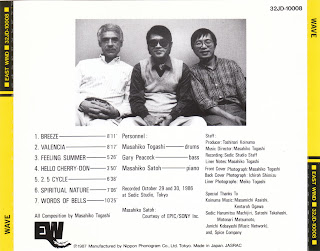 A small contribution to the Celebration of Masahiko Togashi's great oeuvre
A warm reunion, Gary Peacock , hooking up again with Old Friends, Togashi &Satoh, having spent the early 70's in Japan as a student of George Ohsawa, founder of the the Macrobiotic Diet.
Peacock recorded prolifically during that sojourn including several albums with  Togashi notably the profoundly beautiful Voices (Nippon Columbia 1971) and  with Satoh(Samahdi, Far East 1971)

This Appears to be out of print at source, a thorough internet check reveals that there are but a few copies available through Amazon, at well over the Hundred Dollar mark, with only one purporting to be 'New' at 40 or so dollars , hard to know for certain ,I am open to correction on the above point..
beautiful stuff Enjoy!!

PS .. the availability of Peacock's records is Commensurate with his stature, a first choice recommendation for anyone wanting to explore his records under his own name would be 'Voice from the past' an atmospheric session Featuring Stanko and Garbarek  from 1982 on ECM

As for Masahiko Satoh , One cant recommend strongly enough,the Hugely Potent "Yatagarasu' ,a trio with Broetzmann , and Moriyama, on the NOT TWO label
And the Magnificent, 'Signature' with Joelle Leandre , and Yuji Takahashi on RED TOUCAN