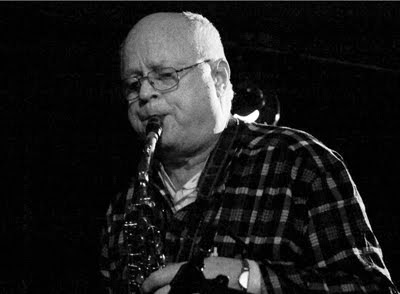 Announced in the festival program as the E.L.Petrowsky Octet,
actually this group is the Ulrich Gumpert Workshop Band that
recorded two excellent albums for FMP (FMP 0600 - FMP 0710).
Perhaps, onxi may add some details. 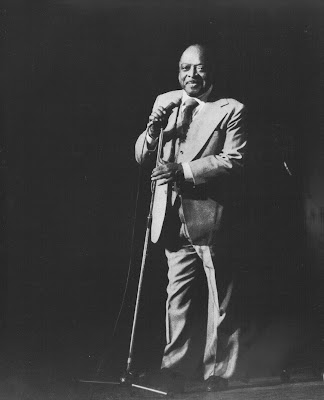 An explosion of swing in this land of avant-gardism... 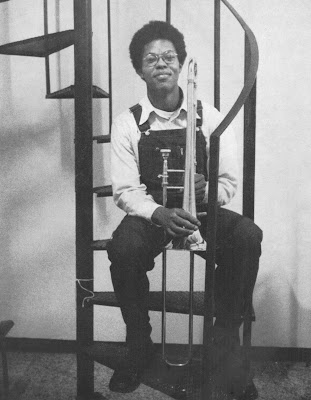 This post completes the documentation of a double performance by the G.Lewis Ensemble at the end of April 1979 in Verona (see AD/DE and GL/RT).
The same Ensemble that recorded "Homage to Charles Parker" for
Black Saint : the two long suites / compositions are clearly an
extended version of the songs on the album.

Special thanks to my dear friend Mr. Zero who recorded the concert. 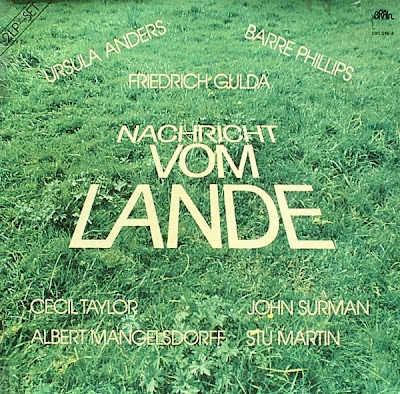 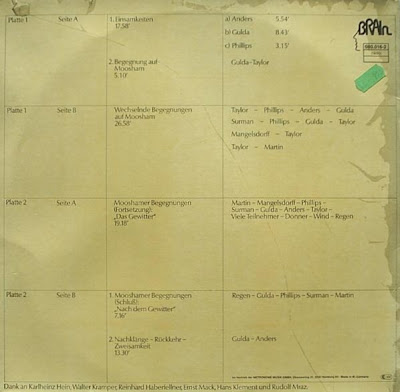 This is one of Gulda's Lesser known records , oddly enough produced for a label , that specialised in so called 'Kraut Rock', Great bands such as Wolfgang Dauner's Etcetera, Neu, Harmonia,Guru Guru and Embryo as well as tedious forgettable Euro trash, like Birth Control, Jane and Scorpions.. this now unfortunately rare double lp, is the most experimental jazz related outing on the cult label, and is regrettably despite being among the best things on the label almost unknown , certainly little heard ....
it deserves better ,  its a neglected Masterpiece!

Gulda , was one of 20th Century Musics Controversial Eccentrics, Starting his Career as a concert Pianist performing relatively conventional standard repertoire , he developed a reputation as a highly individual interpreter of Mozart, Bach, Schubert and so forth.
by the Fifties his interest turned more and more towards Modern Jazz, his first jazz record 1957's, at Birdland is considered a minor Classic,as is his wildly varied and experimental series of records for MPS, running the Gamut of everything from Third Stream big band , to Funky piano trios, solo free improvisation ,jazz rock and world fusion , to an Extraordinary ,very Bizzare 1971 collaboration with Hippie freak Out Outsiders , Paul And Limpe Fuchs' aka Anima Sound....

This record continues along that same Trajectory, and its basically a series of improvised Jams , with an occasional , structure , or short recurring theme thrown in for good measure..

the Mysterious Ursula Anders , was Gulda's life partner, and plays percussion and various objects on this .... when i originally found this gem 20 something years ago, off course i had no idea , who Gulda was , and was largely interested in Cecil taylor , Surman, Phillips , Mangelsdorff , and Stu Martin (whom incidently at around this time were performing and recording together as Mumps)... that all changed , i am now an Avid Gulda fan ... , it  ISVexing that so little of his fairly large body of work is currently available ...

Hope you enjoy this as much as i do , i have only given the rip a very minor surface clean ... its not an ECM cd , and i refuse to make it sound like one..,
we can only hope that in due course a properly mastered edition , of this including perhaps the material from the Concert which it is rumoured was left off the double lp...


Recorded live in Summer 1976 at Schloß Moosham in Lungau, Salzburg.
Track 2 also includes thunder, wind and rain as background sounds from a thunderstorm.


Please note , have not separated the 2 tracks on D , they run together anyway, NOTE the source vinyl is in only fair condition , playable but very crackly , these are the raw materials do with them what you will.. if anyone has a better rip, post it , if you want to clean this up and repost it here by all means do so.

Ursula Anders and Gulda ,recorded several other Albums together for Interchord, Amadeo.. well worth tracking down is 1980's 'Opus Anders '
i have a very worn Barely playable copy , and am looking to buy Cd which i believe was reissued on Amadeo.

buy some available items if you have the Opportunity
cheers
S
UPDATE- a friend has kindly ripped his own copy , which is in much better shape than mine , i'm deleting my links .... he says he doesnt like the album much , feels that its a complete mismatch .... anyhow here are his links
these are the ones you need
Disc-1-
D-2 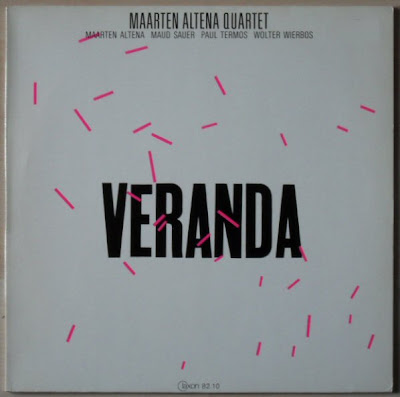 Fm > ? > CDR Trade > eac > flac
Since there's a Steve Lacy Love Fest going on now here's one from DIME, no idea who the original uploader was.
Bill 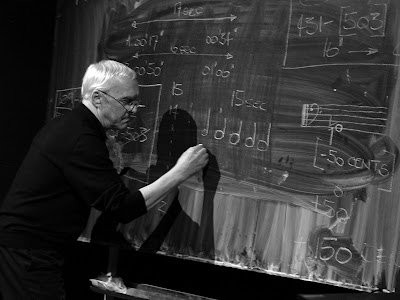 Evan Parker guest of a trio rather active in those years. 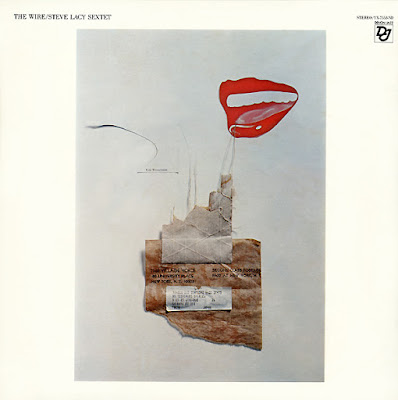 Lacy's ,Greatest Japanese lp (IMO, not that i've heard them all), and a very strong Contender for Best Lacy record period !

this was without a doubt one of his very best bands, the searing ecstatic almost unbearable intensity of most of this set ,is unusual and not often found in Lacys ouevre
Even on 'Free'classics like forrest and the zoo,and Roba, lacy is often restrained ,dry analytical , and sounding slightly detached.

Here we have some of his most violently expressionistic gestural playing on record, all while maintaining the spacious and uncluttered character of this sequence of Japanese records...

This definitive version of Deadline ,  is incredibly haunting ,Ikeda, Yoshizawa and Midorikawa hazily shimmering beneath some opiated distant glimpse of a slowly submerging dissapearing floating world ..


"This album has a very dark mood, especially with the arco basses and the dissonant piano. The percussion too adds to the mood.
Every one plays well and interprets Lacy's composistions in a way that works exclusively with the selected sideman. If the album was recorded with his regular group at the time (Abei, Potts, Few, Carter, Johnson) it would have been completely different."
'prospectus', (from the comments to our initial mp3 post) 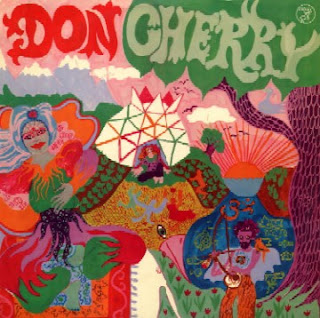 A special gift , from our old Crony glmlr, Highly appreciated ....


Side C
1. Terry's Tune / Hope / The Creator Has a Master Plan / Sidhartha
(one continuous track). 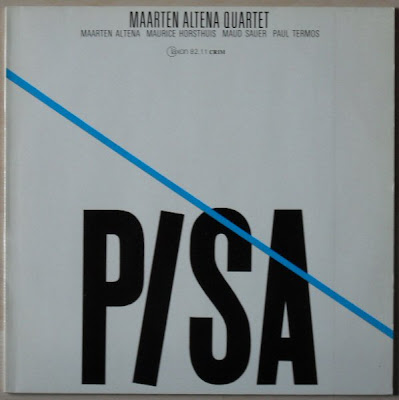 
Recorded April 13, 1981 (live concert in Pisa, Italy).
The concert was part of the winter program organized by "Center for Research into Improvised Music" (CRIM).

Note: Not my rip - the first piece(s) from Side B are missing (B1. Portret van Emo Verkerk, B2 Gemacramatiseerd portret (Termos). 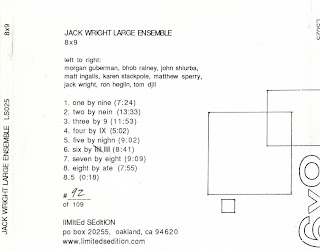 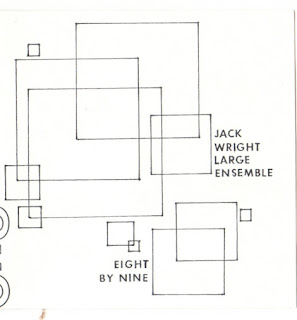 For Kevin , and anyone else who missed it , Jack Wright's, large ensemble-8x9, on the Too little known , but Qualitatively Major ,CDR ,Artist operated Label LimitedSedition... check the links , and if possible we Urge you to support a very worthwhile ,rare  fixture on the American scene ,an Artist run independent label Specialising in Free improvised music....

As for this particular release , i consider myself fortunate to have chanced a purchase, Its superb highly imaginative , free music at its contemporary best, as fascinating as anything in the genre i have ever heard , truly stunning!!
Jack Wright deserves to be better known , as do many of the others performing here... i cant recommend this enough, its a disc i listen too frequently , which grows in stature with every listen..
A Knotty Listen ,Beautifully spontaneously orchestrated ...
I cant think of Anything on Erstwhile, Durian, Grob and a whole raft of other Labels , that i have enjoyed ,or revisited as frequently as this ,but you'll be hard pressed , to find an online review of any LimitedSedition product.
Criminally undeserved ,ignominious obscurity. 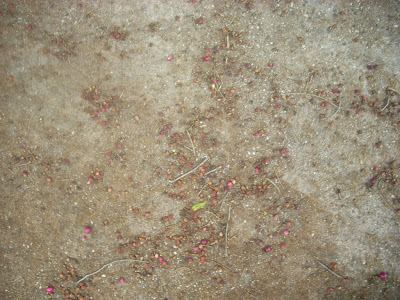 Here's a Re-up load of something , posted here some years ago by Boromir, its been requested a few times.

Roughly contemporaneous, with the magnificent Dreams, on Savarah of the same year, yet sharing almost exactly the same line up as Scraps from 1974, an important slice of unofficial Lacyanna.


this originates from Dime-A-Dozen
thanks to whomever preserved it for posterity! 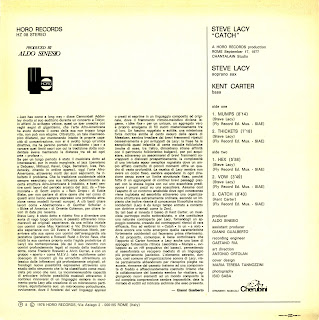 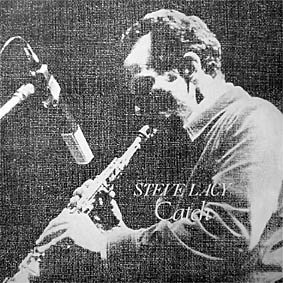 The latest in our out of print Lacy series , not exactly a Personal favourite, rather a perfectly pleasant intimate duo session with Kent Carter ,Lacys regular bassist for a dozen or so years.
Nice moments , including some rare tunes(Hex,Vow) Which don't seem to have been otherwise recorded .

So certainly not a desultory effort by any means , just a little unremarkable in an  under powered /or lacking energy kind of way ... I'm glad i heard it without paying the big bucks for which it sells at auctions...

This is not my rip , so thanks again to LeMo ,from Sfrp who posted this some years ago!

PS/ Big Thanks to Mew23, who has provided some cover scans! (see comments) 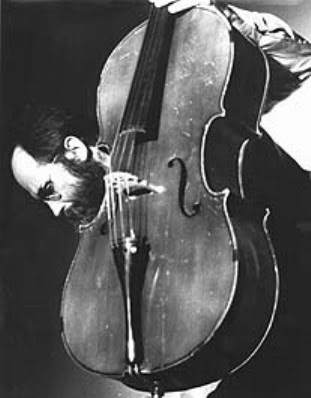 One of the "Morning Project" at the 8th Moers Festival. 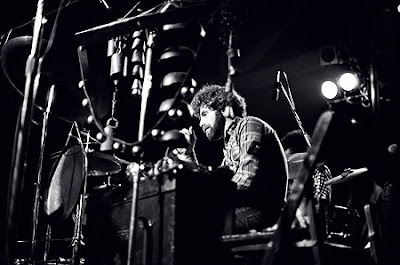 Full version of a concert published years ago by Moers Music
with some cuts, due to the time limits of the vinyl. 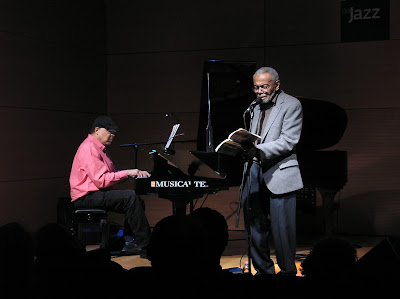 Just got this concert from dear friend PINO27 who recommends
the listening : brief but intense! 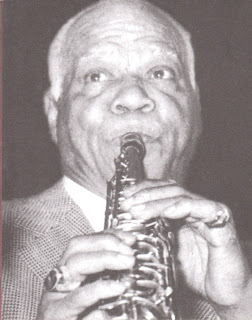 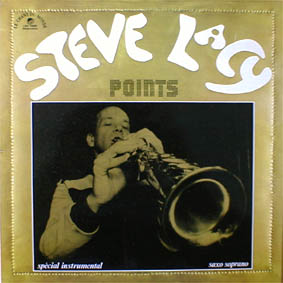 There have been a few requests for this over the years, a fine record from 1978, long out of print, which opens with a stunning Version of Ellingtons the Mooche, which as recorded by Sydney Bechet in 1941, apparently was the catalyst for Lacy finally dedicating himself to the Soprano saxophone
and the Arrangement is not light years removed from the original , apart from a few trade mark whole tone scales..
although at first it seems rather clunky ,somehow the spare less effusive treatment , gives the great tune a more distant  outer worldly character, lacy seems for a few fleeting moments in his solo to directly quote Bechets own ... the blues feeling of which is almost completely erased , the Blues was never a huge influence on lacys repertoire , Potts touches on those aspects very effectively.

Pot Pourri the second piece is a brief solo medley , and one of the few times in his entire discography where Lacy directly references John Coltrane, by quoting  Tranes arrangement of my favourite things , as everyone knows Lacy's Soprano saxophone playing ,inspired Coltrane in much the same way Bechet inspired him , with very different results,some of which have had baleful dire consequences on players of the instrument ever since .


The rest is the band in gloriously fulsome free mode , including the 3 very fine at times explosive Potts/Lacy duets which make up the 3 points suite, Potts is so great on this ,every bit as engagingly inventive as Lacy ,often Upstaging him.... what a wonderful under appreciated , under recorded master saxophonist!


All in All a typically wonderful session from this period


PS-I picked this up online at  the SFRP Forum,  four or five years ago , this is not my rip... A Big thanks to LeMo ,the Original presumed ripper, and Uploader !!
i havent changed the files in anyway.. other than tagging them. 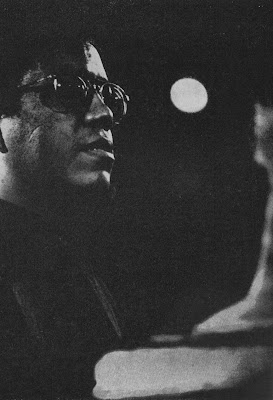 This line-up, the same day, recorded at "Barigozzi Studio"
(in Milan) the B.Higgins album "Soweto" for Red Records.

...thanks to Andy for another round of some really good recordings - sound-wise and the music...you decide for yourself.


And the first one is: 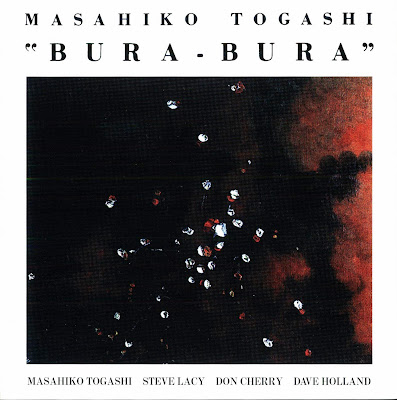 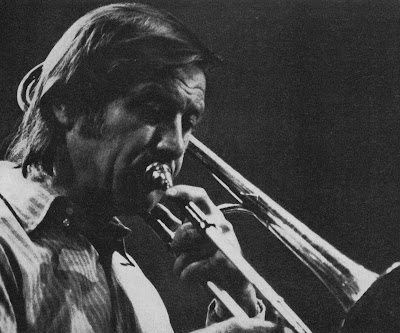 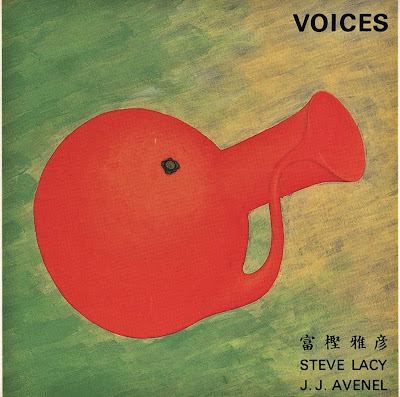 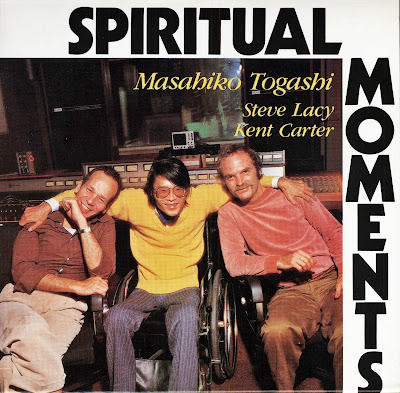 One week before the realisation of "Eternal Duo" took place in Tokyo, Lacy and Togashi joined their forces with Kent Carter. The fruits of this endeavor can be heard through the "Spiritual Moments" on this exquisite recording. 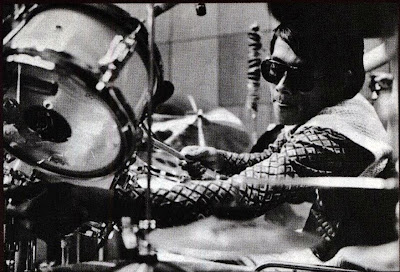 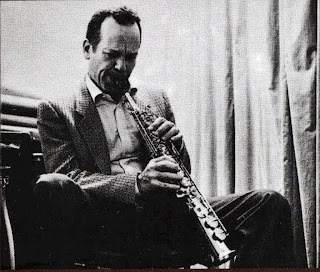 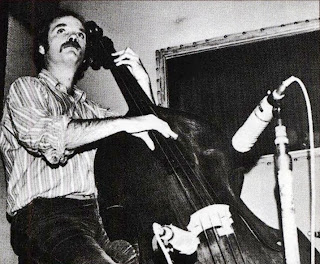 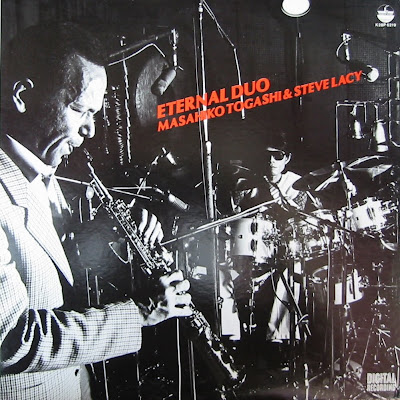 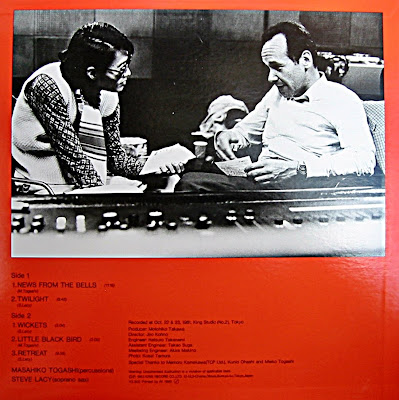