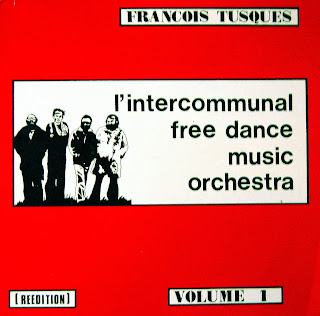 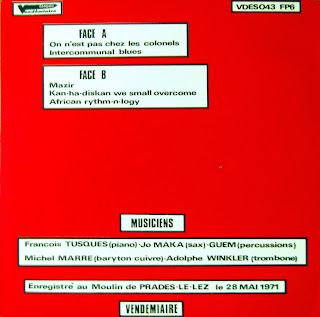 Here's some more Francois Tusques - though quite different from what we have posted before here. Both Free Jazz and Le Nouveau Jazz were early European excursions into the new thing, though firmly jazz-based. Tusques, moreover, guested on a couple of Sunny Murray's albums, a self-titled one and Big Chief and finally, was the leader of his own Intercommunal Music. All of these three were meeting points between American visitors, some of whom were eventually to settle down in Europe, and European players, mostly French. The last, intercommunal, album might hint at some sort of similarity with this posting, but in reality, this Intercommunal group is quite different.

This was a typical 70s brand of "tiersmondisme", a connecting up with musical idioms beyond jazz and beyond the North-American - European nexus, first and foremost African - Caribbean popular styles. This was a "world music" type fusion project, before there was a word for it and it gives an initial signal of what was to be a new musical direction for Tusques - a deliberate attempt to go popular and not to become semi-permanently anchored within a closeted avant-gardish framework. There are interesting parallels with Michel Portal here who would always leave a little space for his bandoneon. This is music for the feet and the body as much as for the head and listening to this, the musicians are having a ball and the audience is lapping it up. This is a live recording, what may be called an audience recording, so don't expect too much high fidelity. What it lacks in sonics, it compensates in atmospherics.

This was out on a small French label, Vendemiaire (with the logo "Disques d'expression sociale") as Volume 1. I'm planning to post Volume 4 next, but if anyone has or knows anything about Vols. 2 and 3, I would definitely be interested in posting them here on this blog.

Thank you so much for this, it would be great if you had "Après la Marée Noire" (1979) on Le Chant du Monde.

This is a fantastic live LP and the most difficult to come by. As far as I know, never released on CD.

Thank you, K, for this rare piece of history!

No, I don't have that one, but I'll keep looking.

The venue for this vol.1 was, from what I've found, close to Montpellier.

Intriguing. Thanks for sharing.

Performed on my 10th birthday. Thanks for the present!

sounds wonderful, thanks..looking forward to it!

[...] François Tusques, one of the leading figures of French Free Jazz, played a key role in preparing Europe for the sound of American experimental jazz. [...]

Hello! (sorry for my english)
I have the first volume of the intercommunal free dance music orchestra on the label " le temps des cerises"
with a text signed by françois tusques .He talk about his band and why they do this music ( very interresting).
I put this record on the EBAY FRANCE soon .

This post reminds me about the old days of good blogging. If you can please visit my site [url=http://kitchencheap.co.uk/]kitchen cheap[/url]

Just a quick update on this one. This lp seems to be a rerelease of the lp first out on Le Temps des Cerises. With different covers for sure, but the music is the same.

Thank you for this, but …
Flac part2 is missing …
Could you re-up, please ?

Thank you very much !

Thank you for sharing this series - I have achieved a download of this the first one, and look forward to immersing ears/brain in it, along with the rest of the Intercommunal collection over time...