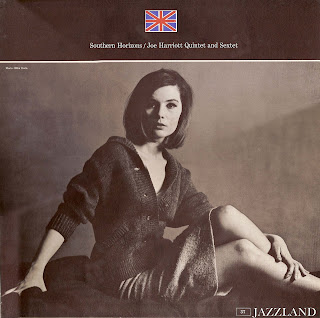 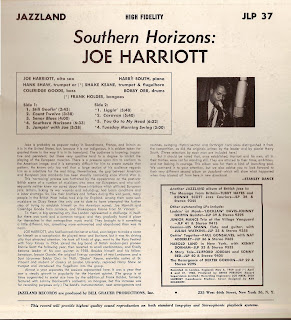 Following up the Harriott posting a couple of weeks back, here, as promised, is the earlier Southern Horizons, originally out on the Jazzland label, and inexplicably, never reissued.

This is Harriott on the verge of the free form/abstract period, but here, still anchored in the hard bop mode. This is stylish, elegant, tight, swinging; whatever label of appreciation you want to attach to it, this is still fresh music, close to fifty years after its creation. In content, it reflects his earlier 50s output as documented on recent compilations such as Killer Joe. He was to step into uncharted waters on his next release, Free Form, and to earn a name as an innovator and to draw perhaps unwarranted comparisons with the Ornette Coleman Quartet. For those looking for experimentation, better consult Free Form than this one. For those apprecating late 50s mainstream bop mode, look no further. If there was a poll of British contributions to jazz history, Harriott would be high on the list, even though he hailed from the Caribbean. He was later to innovate in a different direction by his collaboration with John Mayer on the indo-jazz fusions. However, by the end of the 60s his style was out of fashion and he ended his life as a pauper with very possessions apart from his alto sax.

This record sticks to the quintet line-up of sax, trumpet, piano, bass and drums (as on Movement), but with the added pizzazz of a superb bongos player on a couple of tracks, just to heighten the sense of hepness to the proceedings.

Partly original compositions, partly covers (including a dynamic take on Caravan), this was Harriott's first long-playing record as a leader.

Interesting piece of trivia: Among the record engineers was a certain Joe Meek who would later go on to fame and fortune in his own right. Anybody recall "Telstar"?


Please note that another rip of this record can be found and downloaded at this site: http://shimanchu-devil.blogspot.com/2007/08/
joe-harriott-southern-horizons-1960.html

Thanks for posting such a great album. I've only heard Joe Harriotts album Abstract which is killer. Thanks again

Thank you. All I know of Harriott's is Free Form, so I'm listening forward to this!

Many many thanks for the Harriotts - I gave up looking for them decades ago!

Thank you *VERY* much for posting this and the other Harriott lps. I don't so much as know anyone who has even seen one in the flesh, so my chances of ever hearing them were nothing-to-zero. Thanks for the opportunity to hear such satisfying music.

Just coming across this awesome set now. Thanks for being such a great resource for helping me explore and define my jazz tastes! - G

Has anybody noticed the dreadful mistake made in the pressing of this LP? It would seem that the engineer got one tape being one of the two channels and thought it was a mono tape of the album and mastered it. If you listen you can hear that the two horns have an echo effect as if they were coming from the other channel! it's unlistenable. I guess as it was not released in the UK nobody noticed.

RS links are death... Any chance to reup it in flac files, please?

Thank you very much

Thanks so much, Kinabalu

Dear Kinabalu - thank you for the re-up and for widening my horizon ;-)
Herzlichen Dank!

hello, thank you for sharing this. All the same, more or less since the post came up, the RS page reads "Contains no data. Edit this Share to add data." I try to avoid Mega, or any site which habitually asks whether it can store data on your computer. (Well — at least they ask, you might say.) msj

Anon - I'm not aware of Mega dropping data on my computer(s). If so, I haven't noticed. If you're being asked in advance, you do have the option of saying no.

I should perhaps add that Harriott was indeed a horizon-widener and more than once!

thank you for the working RS link. msj

about Mega (and Rapidgator), if their ethics are bad enough to ask, then who knows whether they take your no in good faith. msj

Thanks very much for re-upping this one.

It would be great if someone re-up links for Joe Harriott.
Thanks