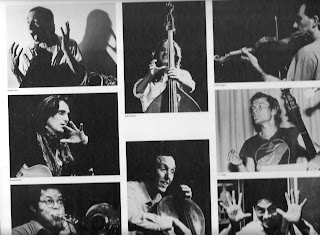 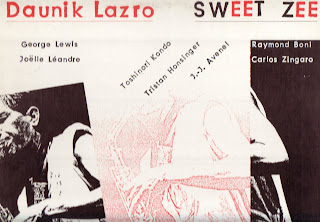 Here’s something I like by Daunik Lazro who's own contributions don’t quite match those on his stellar recent records.
Still Kondo, Lewis and Joelle Leandre have plenty to contribute.
That alone should be recommendation enough.

Again a post by sotise which I dare to take over. The above text is by primarely by sotise.
I would like to add that for the re-up the two tracks of  'Sweet Zee' (side A and side B of the double LP) were reinstalled as a continous performance. (This is a new rip not the previous one altered)

And not at least I want to point out that the concert released on the fourth side of this LP was released as CD in 2016. Actually the CD has the complete concert from this day. Available through the label Fou Records .

Sotise,
You are the Best!
Thanks for this marvellous present. The best way to begin a new year.

uci ,hope you enjoy it.
thakx f'r the compliment..but im not at all interested in being the 'best' just sharing a few things back with others who share.

if you have anything you want to post ...do it right here!!

new artist for me, but looks like he hangs around with the right people snd carries the Inconstant Sol Seal of Approval so ...

Thank you very much for providing this recording.

I have been listening to Daunik Lazro lately and I must say, this is a great album.

I have a question though: What do you mean that Daunik's contributions do not match his recent material? Granted, he as matured as a player and added the baritone saxophone to his arsenal, but I wouldn't cut him short on this recording. Lazro and his colleagues are very inspired throughout.

I believe the "Enfances" from part two is incomplete.

sea and change hi
glad you like sweet zee
i can asure you the files include the entire album..
enfances is complete.

not familiar but curious! danke!

NICE TO SEE YOU IN THESE PARTS ZHAO.
HOPE YOU LIKE IT.

links to the second part of the mp3.rar files doesn't work for me, is there another link ?

thanks for this anyway

Any chance of reuploading this rare disc, please???

Last time it seems.. i only included 3 sides here's a new rip of the whole thing

Thanks Sotise for the re-up. Interesting one.

What a line up of musicians!!! Thanks to S for the original post and thanks to Ernst for the reup and fresh rip. This really looks great.

Superbe and original album that was unknown to me. I saw Daunik Lazro last week on stage with Jean Luc Capozzo, Jean Bolcato and Christian Rollet from the Workshop de Lyon, it was a great concert, we recorded it and will probably broadcast it soon on the show of Jazz and Co