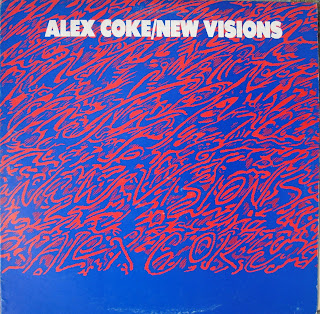 no much known, he has many collaborations with Willem Breuker Kollektief, Tina Marsh Opportunity Orchestra, and some albums as a leader; also some wonderful, to me, albums with Steven Feld and the Ghana connection on voxlox label.

Nice one, and for the vinyl hunters, still a very affordable obscurity.

Alex is a Texan and we shared time in Austin when I lived there from 2005-2012. He has spent a lot of his career in the Netherlands, and might be better known there in fact.

Saw him many times with a variety of groups, including sitting in with the ICP Orchestra on a couple of their visits to town under the auspices of Epistrophy Arts. Alex is a wonderful human being as well as being a hell of a musician (and an underrated one at that). Hopefully he chimes in here to talk a bit about his history and the record.

Thanks for sharing - much appreciated

Thanks for sharing, corvimax!...and Clifford Allen for the memories.

@Corvimax
If you dont already know this album, you may be interested by it:
https://www.discogs.com/fr/Anyaa-Arts-Quartet-Nii-Noi-Nortey-Nii-Otoo-Annan-Alex-Coke-Steven-Feld-Harmattan/release/11924108
I don't know where it is possible to find it but it might be your taste.

correct silence, I have that album
it looks out of print now, since is no more in voxlox catalogue for sell
I think is ok to post it here

In fact I'm not personally searching for this album. It is my interest in the music of Ni Noy Nortey that drove me to this record. I don't know if you know this african musician but if you don't know him I recommend two recordings with the late David Panton
https://pantonmusic.bandcamp.com/album/david-pantons-one-music-ensemble-1978-79-pma1-789
and this superbe live at café Oto
https://www.cafeoto.co.uk/shop/nii-noi-nortey-mark-sanders-david-panton-030116-dl/