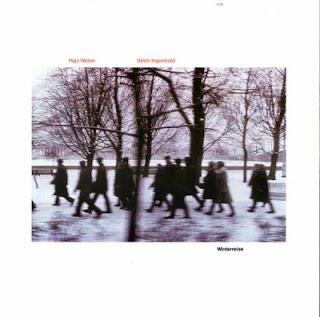 On winter theme. This is not much free or avant jazz, but gentle, soothing and relaxing music, performed mostly on two acoustic guitars. Following excerpts are from review, published about year ago at between sound and space website:

"I know nothing of Hajo Weber and Ulrich Ingenbold beyond the incandescent duets these two guitarists buried in the snowy recesses of Winterreise (Winter Journey), one of ECM’s greatest forgotten treasures. The title, of course, evokes Schubert, and the comparison may not be so arbitrary, for like the famous song cycle it speaks with hushed clairvoyance. Weber and Ingenbold bring distinct flavor to this session, dividing themselves at four compositions apiece.
...
Winterreise is a poetic diary that deserves only poetry in return, and ranks alongside Bill Connors’s Theme To The Guardian and Ralph Towner’s Solo Concert as one of ECM’s most evocative guitar dates. As long as a reissue seems unlikely, make this your first vinyl rediscovery."

I missed this one in its time. Thanks.

I have this vinyl; bought it new as an ECM import on PSI back in the day! Many thanks, this is one of a number of Manfred's productions that have not been reissued on digital I believe.

Looks very interesting and thanks for posting.
Unfortunately both links appear to be dead already.
Cheers, Wally

Yes, I'm getting file not found too. Pity, as I'd love to hear this, to me, unknown album. Nay chance of a re-up?

Wally and bventure, links are definitely working here in CZ / Europe. Seems like there could be problematic connectivity in other parts of globe - temporarily? Can you see Ulozto page with some message or is it completely unavailable? I will try to make rapidshare version, in the meantime you can try czech versions of links to same files:

czech version works for me - thanks a lot miloo2!

Great, bventure - thanks for telling us. Anyway, I tried Mega, so here is another LiNK for mp3.

...and here is new Mega link for flac.

a big THANKS for this!

Thanks for the FLAC file - I copied it from here -

But what sort of file is this? I don't know how to open it?

Wow, never heard of this ECM album before. Sounds very much like Bill Connors' "Theme to the Guardian". Thanks!