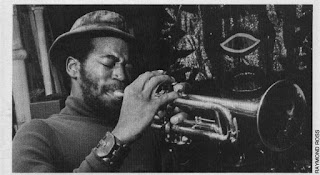 Yet another repost, from early 2013, this one with reference to another loft turned performance space in NY, Ali's Alley.

Following on from the former posting of the Group live in 1987, here is an older date from 1978 with some of the same players. As I said in that post, some of the members of the Group emerged during the loft movement in the 1970s. This was a musicians' initiative to create their own spaces for players to express themselves and interact with others. Perhaps the most well-known was Sam Rivers' Studio Rivbea, and another was Ali's Alley, run by Rashied Ali who was the drummer with John Coltrane during his last days, before launching a solo career with his own group. Ali made a duo record with Frank Lowe in the early 70s and the latter can also be heard on this date.

As I said in the former post, both Abdullah and Bang emerged as major players on the loft scene during the 70s and Frank Lowe was very much a part of that scene as well, having cut his debut record for the legendary ESP label, "Black Beings" with, among others, Rashied Sinan on drums who is "coincidentally" also on this date. So it's all interlinked.

Close to two hours in all here with music, though tending towards the free side, that still has a strong rhythmic pulse and melodic core. Lively, propulsive, energetic, thorougly enjoyable. Dig in!

The sonics on this recording may not be the optimal as this clearly is an audience recording, also capturing the ambience of the space in which it was performed. But don't let detract from the joyous and uplifting music on display here!

No set list given, so if anyone can help out, it would be appreciated.

Jay Hoggart is here on vibraphone and today teaches music at Wesleyan. Jerome Hunter, the bassist, has played with Sun Ra, among others, another common link.

Abdullah is still active today, educator, curator and musician and writer, though his book on his years with Sun Ra still remains unpublished. He maintains his own web site which can be accessed here:

His curatorial work in later years has been linked to thia place:

which is in the Bedford-Stuyvesant area of Brooklyn, one node in a network of community organising. A place to check out for jazz-loving brooklynites and newyorkers?

There'll be more posts on the NY 70s/80s club scene, so stay tuned!

Many thanks for this rarity, it downloaded with no problem, bless you

Thanks for this K, as well as The Group. Both great.

Ahmed Abdullah and Rashid Sinan are on the Seikatsu Kōjyō Iinkai LP that Onxidlib posted a couple of years ago - the links are still live!

Life's Force from 1979 shares most of the line-up from this session and was re-released recently.

Any rarities out of the loft scene are definitely welcome. Sound is decent, considering, better than I would have expected. Thanks for sharing!

Abdullah "Live at Ali's Alley" Cadence Jazz Records 1000 is from April 24, 1978 and features Chico Freeman, Vincent Chancey, Muneer Abdul Fatah, Jerome Hunter and Rashied Sinan. I'm looking forward to listening to the concert and perhaps there is some crossover between compositions.

I agree, any contribution from in or around the loft scene is more than welcome, thanks for sharing this

Thanks - much appreciated - Fred

@Nick: There seems to be a rerelease of Life's Force, but the 1979 original seems to be easier to find, though.

@Clifford Allen: I wasn't aware of the Cadence release, so thanks for that highly interesting piece of information.

I've now ordered both, so eventually I might be able to identify some song titles, hopefully.

Great stuff!! Thanks a heap!


Sorry if this is a double post, I am wrestling with a bottle of Islay this evening.

possible for a repost?? thanks!

Thanks kinabalu for the reup of this one. Late to find it but glad to see active link. Have been listening to this today. Definitely audience but in my opinion the sound is great (very clear, not muddled)!!! Great show!!! Great band!! Really enjoying this.

thanks A LOT!!
this guy is very unique voice at the trumpet..
and I never heard none of my friends ever comment about him..
until one keyboardist talk to me about an album (can't remember which one) he was listening to day in day out..

he and Ted Daniels are my kind of trumpet!!!
all about the music and the group sound..

I incredibly missed it the first time, probably confused with the cadence release.
many thanks, the reup link is still good

Thanks a lot for your links, Kinabalu !