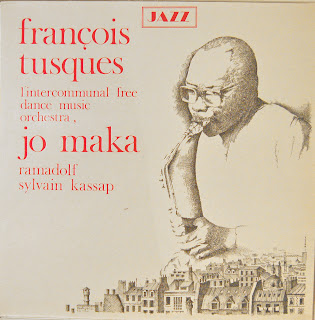 Following up the last post, here is vol.4 of the Intercommunal Free Dance Music Orchestra, led by pianist Francois Tusques. As with the former, this is an opportunity for Tusques to reflect the wider musical landscape beyond the Western horizon of jazz, though the root feeling is in jazz, as seen from their rendition of the Mingus classic "Fable of Faubus". On top of that, inspiration is from North Africa and all the way down the continent, from Latin America and the Caribbean and from French history with reminescences of the Paris commune. And at the end of the second track, there's a snip of a well-known tune which one unfortunately doesn't get to hear very often these days. I do think I hear touches of the South African Blue Notes on this record, though it may be wishful thinking on my part.

All in all, a very enjoyable record and if anyone knows of more, please say so in the comments, though these things are becoming hard to get. I will certainly keep an eye out for more.

4. Fable of Faubus (Charlie Mingus)
Same as on track 2 minus Kilikus

This disc is dedicated to Jo Maka (and do listen to the very fine solo on "Mazir).

I'm going to dance away!

There'll be more dance music coming up, Wos, so watch this space!

THIS IS FANTASTIC!!, THANK YOU...much better than vol1 ,i thought.

s, I agree. The tunes are more developed, even "Mazir" which you find on both, is better on v.4, not the least due to Jo Maka. But there's more of a live party atmosphere on v.1.

truly surprised by he quality of these records .. they are wonderful , theres almost a senegalese take on cuban rhumba rythms on some tracks ... i love those rythms

I agree with Mr NumbNutz - this is really enjoyable.
kinabalu, - do you know much about Jo(e) Maka himself? A little while ago, I made just a short (possibly naive) comment about Maka on a post here (http://ninegreychairs.blogspot.com/2009/03/traffic-noah-howard-frame-rf2005.html) - this is about the sum total of all I know about him though. And he played with Tusques quite a bit.. I'd love to know more - he's a fine musician.
Thanks for the Free Dance Music Orchestra posts - much appreciated !

S, I know very little, but I'm keen to find out more (records). Thanks for the solo Tusques. Pierre slipped me a digital copy before it got posted on 9GC.

It says on the back of Vol.4 that he (Jo Maka) ran a studio near Les Halles in Paris which was a meeting place for musicians from different parts of the world. I have an eye on another record, but, as they say, only if the price is right ...

Jo Maka was born in april 1929 in Conakry, Guinea to a Gabonese father and a mother from Sierra Leone. He was initiated to music at an early age by his father who had a band. During the 1950's in france,he studied art history and civilisation while continuing his in-depth study of the saxophone. He later participated in the blossoming of the African and French West Indies music scene in Paris and has shared the stage with Alain Jean-Marie, Cheikh Tidiane Fall,Bonga,Bobby Few,Adolph Winkler,Francois Tusques,Louis Xavier,Nina Simone,Georges Gaumont to name but a few.He was at the origin of IACP (music school) created by Alan Silva.A fine teacher, he excelled at awakening his students talent and was pivotal in introducing young musicians to his vision of a universal African music.He died in march 1981.

The one and only record I have with Maka on it, has his first name spelled 'Joe" - with an "e". RE-Googling now, with a "jo maka" search-string (no "e" in other words)- yields much more information (albeit in dibs and dabs). Ive known of Diom Futa -(w/ Bobby Few & Cheik Tidiane Fall) - for a while, but will have to make it a priority to track down and hear.
As to this LP here - safe to say that between the October 1980 tracks and the 2 tunes from 1981 - Maka had passed away. Hence the "Tribute To.."
Jo Maka 1929 - March 1981

Incredible ! A friend pass me the mp3 of this . And I really cherish it . Saw it one time in ebay but clearly too expensive ...Then i lost my hardrive and where looking to find back some music . And what a surprise It's still here and even better in flac . Thank you so much . What a labor of love you make here .Bless

Good to hear! I've posted in all 6 volumes of Intercommunal. If any is missing, please report and I'll have them up again. It took me a while to get them, but perseverence is sometimes rewarded.

Jo Maka (unbeknownst to her at the time) was the father of jazz singer and composer Elizabeth Kontomanou. She explained on 21/03/12 on this programme how she discovered who her father was:
The programme is in swedish but EK's explanations are in English (and the translation is consecutive, not simultaneous). Amazing story.

Unknown - is there any way that this program / interview might be heard? can you mention the radio station or media channel it was aired on? Sounds interesting.

Yes, could you please indicate more precisely the title of the programme and whether it was on radio or TV? Might be accessible on the net.

dead(
too late i've discovered this Le Musicien for myself)

yeah!!! it is an amazing finding for me, thanks so much for the repost, kinabalu!