Kevin Ayers and the Whole World live in Driebergen Holland 1970 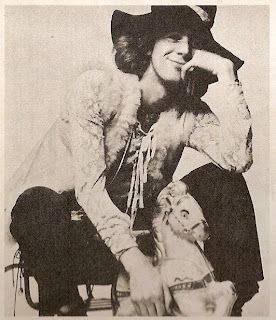 Here's one that has been doing the rounds for a while. Known as "Colours of the Day", it features a live concert at Driebergen, Holland, broadcast by VPRO on 30 July 1970. This ROIO also comes with extra tracks recorded elsewhere, but what's on offer here is the Driebergen concert and nothing but.
This band was a strange creature and perhaps too strange to last for very long. It mixes Kevin Yyers' very English pop songs with an instrumental crew better known for long improvisational workouts. Lol Coxhill was to continue as a jazz improviser, Mike Oldfield to strike gold against all odds with "Tubular Bells", David Bedford to become a contemporary music composer and Robert Wyatt to continue drumming with Soft Machine and Matching Mole until an accident left him unable to go on drumming, launching a new career as a singer, composer and player up to the present day. And Kevin Ayers made a bundle of albums until his semi-permanent retreat in Ibiza, but has resurfaced recently with a new solo album.
The tunes are mostly from the first two Kevin Ayers solo albums with a couple of Soft Machine standards thrown in for good measure, as a launching pad for extended improvisation. A motley bunch of characters, to say the least. And Lol gets to do a little bit of crooning towards the end, said tune resurfacing on his first solo album (which we perhaps ought to post here).
The facts:
KEVIN AYERS
Driebergen, Holland, July 30, 1970FM broadcast - (53'22")
01 - The oyster and the flying fish
02 - Lady Rachel
03 - We did it again
04 - Hat song
05 - Clarence in Wonderland
06 - Colores para Dolores
07 - Why are we sleeping?
Kevin Ayers
Lol Coxhill
David Bedford
Mike Oldfield
Robert Wyatt
and Bridget St. John on track 1
A jolly good time was had by all!

What a pleasant surprise to see some out Canterbury here! Ayers' first two solo albums are must-haves, with the second containing lots of out/experimental stuff from essentially the same band as this concert. Wyatt, of course, was a major figure and an outstanding drummer, and since his work on drums is sadly finite, it's a pleasure to hear him in this context. Thanks for posting!

Anybody interested in the very first and seldom heard Soft Machine 7"?

wow, all-star from a wonderful canterbury vintage. there was once a very good italian wyatt radio broadcast posted here: http://www.bigozine2.com/ i wonder how much more might be unearthed? great! many thanks!

This is great. Thank you. I am new to Ayers. I got into him via the new album which is magnificent and then got the recent box set for Christmas which has really confirmed to me what a godlike genius this guy is. btw. the concert recording included in the box set is out of this world good.

Can't wait to have a listen, thank you so very much...

Phenomenal! Over the years, Kevin Ayers just sounds better and better. I have to admit I was fairly late to the party, having dismissed, in the punk wars, KA as a dilettante footnote to the English Underground. When I eventually heard "Joy of a Toy" about 5 years ago, my reaction, apart from being knocked out by the quality of the songs, was "how could I have missed this for three decades?". This live recording is proof that KA (and the Whole World) were criminally ignored. Against all odds, they appear, in retrospect, to have managed to present the acceptable face of Progressive Rock. Certainly not a "dilettante footnote", (although that would make a pretty good compilation album title). Thanks again!

Thank you, this is a real gem!

All Hail Kevin Ayers! Keepin' it fresh ... and far, far out.

Good to see so many positive comments about this Kevin Ayers concert. I've just returned from Utrecht which is quite close to Driebergen. We'll have more vintage Canterbury, for sure.

Great post! I love the whole Soft Machine family of music. I belive The Soft Machine invented fusion because they did it in 1966 whereas Miles started in 1968, ie: jazz with some electric instruments does not count as fusion necessarily.
-TheSuperFreak

Any chance of a reup? The links are long gone.
Thanks!

Thank you also for this reup. With downloading thhis concert a new musical journey will start for me.
For me KA was always only a rather fleeting experience. I will try to adjust this unexcusable absence. Robert Wyatt and Lol Coxhill are still high on my scala.