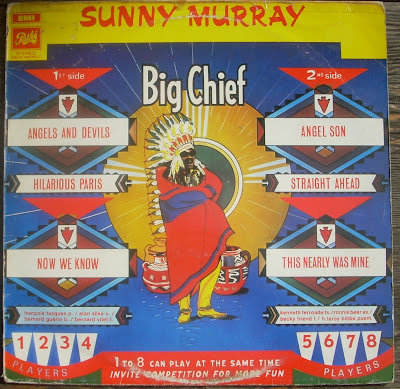 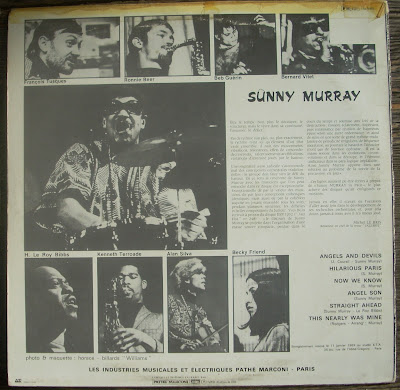 One of the surprises of my early experiences in the Blogosphere ..was finding a rip of this particular album which i'd had on tape for many years... that rip at 256 by Nonwave.. who has shared many rare gems in the last couple of years, is still available at Nothing is v2..and elsewhere.

Im pleased to be able to present a lossless rip , which i made recently on a portable zoom -box (recorded at 44100 HZ 16 BIT WAV then converted to FLAC) Straight from Iain's amplifier into the device.
tracking using this method requires precision in real time, something elusive on the day ..Swedish vodka.. and incessant music jabber doesn't do much for ones powers of concentration.
All turned out fine in the end...the music's all here..in good sound.

I've been in love with this record ever since first hearing 20 years ago(the very same pressing) a pity that it's relegated to the status of a obscure rarity, since it really is one of The masterpieces produced in Paris during Murray's early ex patriot life there..a period hailed as the Golden Age by fanatics of the Genre.

I prefer it to the better known BYG records,for a start its a better balanced recording, no filler here 'angels and devils' and 'hilarious paris' are among the great anthems in the genre... the version of Richard Rodgers 'this nearly was mine' is a riotous melee that teeters on the brink of chaos.. more 'tasteful'despite its almost over powering emotive load than any smug self knowing formulaic rendition...a great tune.done thorough justice!

The great Alan Silva plays Violin exclusively here..alternating spectral whimsy and frenzied dervish like prayer's.. he is magnificent, they all are .
It's a trans formative experience... to the skeptics who may feel im' tugging myself a bit hard...impossible to exaggerate the impact this record has had on me personnaly check it out in all its sonic glory... clicks and all.

Its unbelievable that one of the finest records of the late 60's remains unreissued to this day
scandalous too that so much early Murray languishes on the unused dusty record shelves of collectors .

THE REISSUE ABOVE CAN BE ODERED DIRECTLY THROUGH THE LABEL HERE
http://www.eremite.com/discography/mte51.html

Terrific, as you rightly say. Big thanks!

This is a wonderful record that repays repeated listenings and one I love dearly.
I've tried to buy a copy a few times, starting in 1987, and as recently as last week - it's all come to naught though...

Another great gift ... you guys are so giving ... thanks

This and other recent posts of yours have been mind boggling. wow & thanks.

Sotise (and all the crew),

Thanks again for your hard work in uncovering these gems. I have never seen this record before. I look forward to hearing the Motian/Brackeen concert; Brackeen had (there was talk that he was playing again) a great voice. There are those couple of Silkheart records w/O Dara as well for those that want to hear more. The ECM mix/mastering of the Motian trio reduced and spread out his bright and powerful sound. Thx.

There is so much great rare stuff here that I can't hear and comment in a timely fashion. The Konitz/Magnelsdorff, indeed, especially that version of Body & Soul where Lee sings and hums thru the alto. And the additon of Portal to the Brotzmann & Bennink powerhouse created a whole series of unexpected dynamics.

big ups,
(any chance that that Lacy & kronos concert might appear here?)
The President Elect

Prez... thanks for your comments.. i second that request for the Lacy and Chronos Q.. i would love to hear it, im not a member of dime and get what unnoficial material i have through postal trades.
anybody???
Serviceton, boromir.. kinabalu

Konitz is an all time favourite..Prez E, IF YOU OR ANYONE ELSE has any unnoficial LK, or any oop or un official recordings they want to share , i'd be happy to host.. invite you/them to post.. this is a fully collaborative Blog all are welcome.

Thanks so much for the Murray - I listened to it this morning and it is sensational. I shall listen to the Tusques posted here earlier again soon.

Here is the Kronos/Lacy concert. Not really my sort of thing, so I'll just give the links here;

Thanks so much for above links.

Thanks sotise , wow that cover is something else !

Reza.. you too man have a great ,and fruitful one, take care!

my label eremite records has re-issued BIG CHIEF on vinyl, a lovely reproduction of the original l/p pressed on RTI-180 audiophile vinyl. the re-issue was done with sunny murray's full participation & blessing. look for it soon on ebay, eremite.com, etc. meanwhile it would be cool if you guys removed these files? best '09 regards, eremite records, CC: sunny murray

anonymous (Michael E.?) - that is seriously wonderful news.
You have an order from me for 3 copies straight off the bat.
Seriously, fan-fucking-tastic.!
When though ?(generally available) ?
(Cant yet see it on eremite.com or ebay... you say 'soon'...)

If Murray is getting royalties on the Eremite re-issue (something he has seen little to nothing of for his early recordings), then I'd urge folks to buy this reissue when it appears.
It's a great great record, the sound of new vinyl will cane the pants off this second-hand rip.
A label worth supporting gets something, but MOST IMPORTANTLY, AN ARTIST WILL BE SUPPORTED.
(which don't happen much in blogosphere folks..)
And has not happened enough to Sunny Murray throughout his career.
The man is a great great musician.

Michael E, /Ermite.. ive removed the links ..have to say though it's a pity that Big Chief is going to have such a limited market...most people dont buy 180 audiophile vinyl...cd is still the common currency....

Good on you though for THE INITIATIVE, better you with Sunny M's 'full participation', than crooks like abraxas and get back.

sotic, w/ regard to your comments about "limited markets," "that most people don't buy 180 audiophile vinyl" & that "c/ds are still the common currency." as someone operating a specialty jazz record label now in its 14 year, i have this to say in response. circa 2009, 1) vinyl is a larger market than c/ds; 2) full album download blog sites are more 'common currency' than record stores selling new c/ds, or customers buying new c/ds & 3) they are all --always were & will be-- limited markets. serviceton, thanks for your enthusiasm about the reissue. finally, refer to sunny murray's comments about working w/ eremite records in his paris transatlantic interview to eliminate any doubts that sunny is anything but totally thrilled to have one of his true masterpieces (BC) reissued by a label that he trusts sufficiently to have released all of his work as a leader in the last decade.
greetings forever, eremite records

Michael E/ERMITE
you have my unwavering admiration ..for doing justice to one of the absolute greats Sunny Murray, Ermite is one of the few labels venturing into this music with respect and profound love for the music... that all that counts in my book, no question there to be sure.

as for this and other blogs being the common currency, you'd be surprised big chief(lossless rip) only got 37 downloads in 8 days, considering that its out of print (your reissue hasn't hit the shops yet)and that it is one of the great albums in the genre, thats a paltry number.

ive been truly dissapointed by the quality of so called audiophile pressings ... the vinyl resurgance has been a dissapointment..in the last 10 years ive bought (off the shelf..brand new)9 ,180 gram pressings and they have all without exception been poor...poor sound quality(no remastering from the source tapes) riddled with pressing faults, none of this is a surprise given the rampant free market orthodoxies that have been and are still the reigning buisness orthodoxy.
its clear that vinyl pressing is almost a lost art...inferior materials must have been used to produce such poor sounding records.
its evident that most of the cost of production in the cases im talking about..went into the beautiful facimile reproductions of the packaging.

the last one i bought was Jimmy Lyons other afternoons.. and it sounded flat and one dimensional... now those BYG records were never stunning in terms of sound quality.. but a comparison to even a worn original copy quickly revealed the difference, the 'audiophile pressing ' was just plain DULL.
that was 5 years ago and those records were all without exception abraxas/get back reissues of BYG and ESP albums( there were and sill arn't cd alternatives for those particular albums).
so im frankly sceptical...

living in Australia where we pay among the highest price per capita for records ,cds and dvd's ..and where very few shops stock that kind of product we pay anything between $35 and $60 dollars for so called audiophile pressings.
and for us the online option is hardly less expensive.
i know that many will disagree, and that people love their vinyl...so do i... but not at the cost of the music itself.

All that to say that i wouldnt hesitate to buy a properly remastered cd of Sunny's big chief , but would have serious doubts about a vinyl reissue.
to be fair none of that wax was ermite product..(i do have may ermite cds, and they sound great). i have bought a few japanese prestige and contemporary audiophile reissues ,second hand that sound great, and do the music justice.

thanks for your imput.. i wish you and Sunny sucess, he certainly deserves it.

having a bad experience w/ one companies vinyl reissues shouldn't result in having "serious doubts" about vinyl reissues from other sources. many labels have very high standards for their vinyl, just as many do not (you may well have provided an example of the later). eremite (+bro) uses RTI for its vinyl, considered the best pressing plant in north america (& the place used by many"audiophile" labels). using the best available source we remastered the music to the highest possible standards (thank you mike king at reel recordings). regarding the sleeve, no expense spared. thanks for the good wishes, eremite

I've searched for 'Big Chief' all around the internet with no luck. Would you mind re uploading the album? I've got no money to order the vinyl and such.

It looks like you can get it straight from Eremite for 25 USD. We don't post items that we KNOW to be in print.

Big Chief is out of print at the eremite site. Could we have a repost please?

there is a problem with the file. it cannot be extracted. could you re-up again?

sry about all the trouble and thx!

Thank you Ernst for this new rip in stereo and Brian for the art work. I had an old memory of this lp, an original copy bought more than twenty years ago but in a very bad condition. SO it is almost a complete rediscovery for me and I think it is one of the best Sunny Murray from this period, beside "Hommage to Africa" of course.

Since Eremite lists the reissue as Out of Print on their website, could the link please be re-upped? This music is no longer available for purchase in any way.