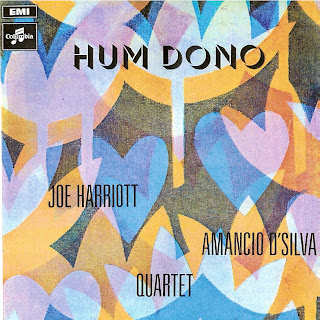 Continuing with the Harriott postings, and moving up to 1969, this was a collaboration of Joe Harriott with the Goa, India - born Amancio d'Silva. This came after the recordings with John Mayer wherein Harriott would move into "world music", long before that phrase was coined and develop his own brand of East-West fusion, using Western as well as Eastern instruments.

Here the fusion continues in perhaps a slightly more subtle fashion. D'Silva draws upon the jazz guitar tradition of Django Reinhardt, Charlie Christian and Wes Montgomery, but sneaks in aspects of the Indian vocal tradition on the title track and Norma Winstone's vocals on the opening slide effortlessly from Indian popular song styles to snatches of "My Favourite Things".

On the opening, there are Latin rhythmic inflections, on "Ballad for Goa" shades of Portuguese fado and on the closing track, what to these ears sound like a precursor of the fusion music that was to become immensely popular in the 1970s.

This is an exquisite, beautiful record. It's all very tastefully done and it swings like hell in passages. This is Harriott in yet another setting and yet again pointing ahead to what was to come. You will dig it (or else ...)

Originally released on EMI Landsdowne in 1969 and never reissued since then.

Thanks to good pals in the US/Canada for this hidden treasure.

MAGNIFICIENT !! Thank you! Thank you! (my palms in the air - kneeling to my computer screen).

"Stephano's Dance" is hard to resist; "Jaipur" makes move right on your chair and the title piece also.

I just simply don't understand why it's not reissued properly.

This blog has the strongest start of the year. Cheers to all.

Very nearly a perfect record. A few years ago, I had some communication with Stephano D'Silva (Amancio's son and the namesake of the opening track on the album) and he'd indicated that Hum Dono was set for reissue. [This is what has been posted on the Amancio D'Silva site, maintained by Stephano, for over two years: "Full re-release on CD by Universal music: expected Spring 2005"] Steph is also a guitarist. Here is his MySpace page

All hail Kinabalu for this one!

Many thanks for this posting. I have read about Harriott for years but this is my first exposure and I am highly impressed (although I'm not as enthusiastic as some about the vocal backing). I will definitely be seeking more as a consequence. Again many thanks.

Very much liking this I am.

I didn't know this side of Harriott. Thanks muchly for sharing it!

Every thing of Joe Harriott's I've heard is just amazing, and this is no exception. Thanks for this one!

Haven't got it yet. but looking forward to it!

Thanks for this gem.

Fantastic post - many thanks!! I recall Universal muttering about releasing this a few years ago but since then... silence. Not having the whole of Joe Harriott's catalogue available as proper reissues is really a disgrace. A box set of the Lansdowne releases exists in my dreams...

Many thanks for this. Just found your site after your visit to BritJazz.

One of the Harriott's I don't have and a crime that it has never been re-issued. Have you seen the prices the lp fetches (if you can find one)?

Amazing to find this with the flac links still active. This is an album I thought I'd never find.
Many thanks.

This is SO good. Now my favorite Harriott. Thanks so much.

Brilliant site, I had not noticed inconstantsol.blogspot.com earlier in my searches!
Continue the good work!

This is a question for the webmaster/admin here at inconstantsol.blogspot.com.

May I use part of the information from this post above if I provide a link back to this site?

Thanks for sharing the link - but unfortunately it seems to be not working? Does anybody here at inconstantsol.blogspot.com have a mirror or another source?

It DOES work. This seems to be an automatically generated message for reasons beyond me.

Thanks for sharing this link - but unfortunately it seems to be not working? Does anybody here at inconstantsol.blogspot.com have a mirror or another source?

Hi - I am certainly delighted to find this. Good job!

Unknown session, for Me of course. Thanks!

Holy grail stuff - and it's still out there! Many, many thanks...

Cheers for the terrific post, kinabalu, and for keeping the links alive. Thanks to grumpy, I found my way to it five years (!) after it first appeared and am delighted that this rarity is still available.

Nice and sometimes surprising music, thank you very much for sharing this one Kinabalu !

Thanks Kinabalu - shall try something entirely new to me.

Thanks kinabalu and onxidlib for the chance to pick up later with new links.

Now available on CD for the first time, from Vocalion Records: