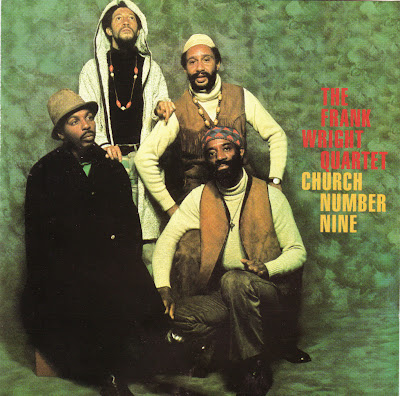 heres a record that deserves a wider hearing.
i feel its one of his best albums(and im not an unreserved fan)
this was originaly issued in a very limited run on a french lable called calumet, only three hundred copies were distributed.

ive ripped this from a cd , presumably the bootleggy black keys reissue ,from the early 2000's.

i can find absolutely no information as to the provenence of this reissue, nor on black keys the presumed lable.

ive checked its availability, and there seems to be no one who has it, although it has occasionably come up for auction on ebay.

forced exposure do not list it.
cd hut, and amazon says its temporarily out of stock, the customary response when they dont have something.

the cd itself contains no clue as to provenance, no lable indicated, no address, no date of reissue, all the hallmarks of a bootleg.
anyone possesing any info ,come forward.

a raft of frank wright's OOP, material has been posted at church number9 the blog, and since ive been sitting on this for a while, i thought id throw it in to compliment those posts.

the personnel on this is the same as that on the classic one for john.
wright- tenor sax, noah howard- alto, bobby few -piano, mohammed ali-drums

for me its probably bobby few's playing thats most impressive.
if you enjoyed this , and the center of the world posts on ch#9 buy others here
http://www.forcedexposure.com/bin/search.pl?search_string=frank+wright&searchfield=artist

i bought this on cd at dusty groove in chicago (think i paid $9.99). my copy similarly has no information whatsoever re: label (only the catalogue number co-4763). there are some nice liner notes from valerie wilmer, though.

This CD pops up from time to time on Dusty Groove, along with the Art Ensemble of Chicago's Goin' Home. The provenance of both "reissues" is dubious, to say the least.

Just discovered your blog and it is rapidly becoming one of my favorites!

beautiful beautiful record. very intense music for a fairly small group of players. bobby few's piano playing is indeed wonderful, from splashy free playing like his work with ayler to rootsy gospel stylings, justifying the title (as does Wright and Howard's soulful playing). Thank you very much for sharing this one!

could you please send me an invitation to the church number nine ?

Thank you Nick for re-posting this great album and for the 1f link, very simple and fast.

Extra track included only on the Japanese release on EMI-Odeon.

Sometimes I'm a little slow with math. Thank you, Nick, for the improved and augmented 9+1 rip.

Black Keys records was based in Paris, France, managed by two free jazz fans. I bought this CD reissue in 2002 in Paris (rue Chaptal). It was their first reissue under licence (co-ordinated by: Didier Kowalski & Didier Rustan; original producer: Berjot), the following one had to be "Chi Congo" by Art Ensemble of Chicago. Unfortunately, it was not able to be made by them and Black Keys records disappeared, because the "Church Number Nine" (Black Keys CD 7701) well not having been sold.