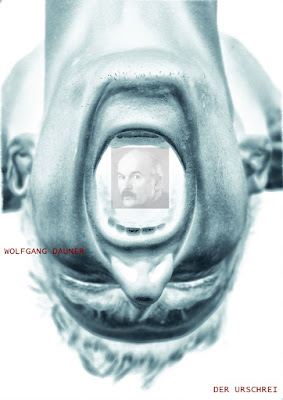 The promo LP from which I've ripped this rare composition by Wolfgang Dauner wasn't in the best condition. Removed several louder clicks 'n' pops manually. Then I've added a very mild filtering. You will still hear some crackling especially in the quieter parts of this work but I'm sure that the music deserves to be heard even with some extra noise.

Two years later in 1976 Dauner composed a jazz opera titled "Der Urschrei des Musikers" for the Berlin Jazz Days; during the performance Dauner had excerpts from contracts with musicians read aloud. The work dealt with the mechanisms in the record industry of that time.
And again in August 2010 in Stuttgart he came back to the topic (BTW: Urschrei means primal scream) with a composition / opera titled 'Second Prelude to the Primal Scream' (Zweiter Auftakt für den Urschrei) [conducted by Dennis Russell Davies] in memory of his Berlin opera.
How much the music offered here is the seed for the latter two compositions I don't know. But it seems rather likely that Dauner had an idea / theme which kept coming back through a good part of his life as musician and composer.

Fun, it was recorded in 1974, but released as NDR Jazzworkshop 1976.
I see there's a Ponty track also, have you ripped it?

@DRONSZ - no I did not rip the second side. The condition was even worse than side A. So I refrained from ripping it. And meanwhile I've sold the LP.

Superbe track that worth the full lp even if the side b seems not exciting. Your cleaning work is also perfect, if I say that it means that it is really perfect, you know my sensitive ears Ernst :)
Dauner was a true genius, able to play in many styles and I think he is still underrated.
great share.

and the B side will be excellent... maybe someone... sometime

Ernst thank you for sharing 27 minutes of pure aural joy!

Thanks for thsi rare piece Ernst

I only listened to it now ... great! Thanks Ernst.