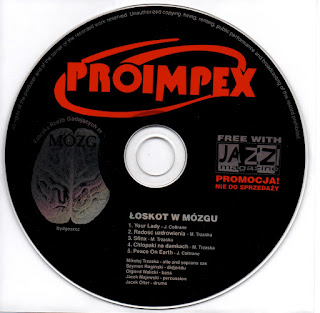 The jazz of Eastern countries is not very represented here, so I decided to start a trip to the east that will take us to ...
Our first step takes us to Poland to rediscover the Yass scene which lasted almost a decade and which was very interesting but surprisingly remained almost completely unknown outside Polish borders.
If you want to know more about this scene:
https://en.wikipedia.org/wiki/Yass_(music)
In fact, most of the records in this scene are hard to find today.
Let's start with one of the iconic bands of this scene: Łoskot and their debut album. The only two times I've seen this disc including the time I bought it, it was a promo copy without cover and obviously distributed with a jazz magazine, yet discogs announces a commercially distributed disc but that I've never seen.
https://www.discogs.com/fr/Łoskot-Koncert-W-Mózgu/release/3202059

Jacek Olter and Mikołaj Trzaska where also members of Miłość a band that will be featured here in a near future. Jacek Olter died in 2001 but Mikołaj Trzaska is now an important musician of the European free jazz scene.
Last but not least Łoskot reunited in summer 2017, obviously any new recording is on the way but who knows…?

All compositions by Mikołaj Trzaska except « Your Lady » and "Peace On Earth " by John Coltrane.

Recorded and published in 1995
cd rip

'Peace on Earth' is also by John Coltrane ;-)

Fortunately you are here Ernst!

I love Loscot, this is a welcome upgrade

this is important music/info backfill on Mikołaj Trzaska for me. THANK YOU!!!!

any chance for a new link? thanks