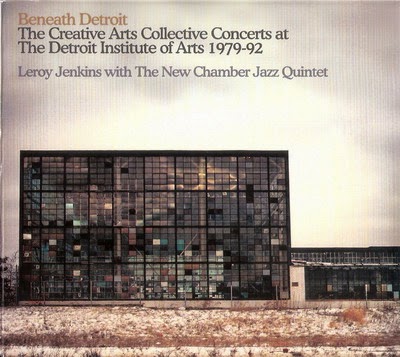 Beneath Detroit. The Creative Arts Collective Concert At The Detroit Institute Of Arts, 1979-92
Leroy Jenkins With The New Chamber Jazz Quintet

Incredibly already forgotten.
Geodesic has released only three albums, from what I know, all in 2010. Other were scheduled but never released.

New to me, thanks.

Thanks. The best Geodesic was the reissue of the long out-of-print Transdimensional Space Window.

haven't heard jenkins' "through the ages, jehovah" since andrew cyrille's FANTASTIC album "The Navigator." Look forward to hearing the man himself revisiting it here, and all the rest... Thank you!

Wonderful diggin' Corvimax! anything Faruq i am (more than) willing to try!
thanks a zillion [:-)

wow - I was still pretty actively reviewing at that time, and nothing on this label crossed my radar (surprisingly). They must've been very word-of-mouth. Can't wait to hear this.

apparently I've been sleeping this past month - many, many thanks, man!

keep on truckin brother, we dont have leroy but we got his works

May we please have a re-upp?