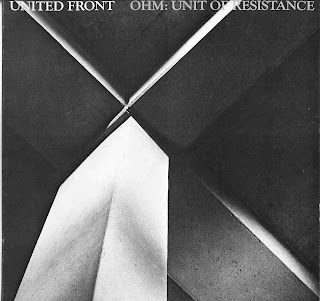 United Front - Ohm: Unit of Resistance
RPM Records RPM 2 (1981)
Here is the second album from United Front, following up the posting of their first below. One notable change in the meantime; Anthony Brown has replaced Carl Hoffmann on drums/percussion and Jason Michaels has been added on piano on a couple of tracks. Otherwise, I don't hear any major changes from their first. One difference is that this album appears more coherent and consolidated. It's very well composed and arranged. The Art Ensemble of Chicago touch is still there, I feel; witness the poetry and musical theatre on "Nothing is More Precious than Independence and Freedom", the serenity of "Ichi Ni San" (meaning one two three in Japanese) and the confident swagger of "What I Heard Once".

I was gratified to learn in a comment to the earlier post that several members are active in the San Francisco area. Shall we hope for a united front again? In any case, these early records have made me curious to explore what these fellows have done later on.


Didn't these guys have an album on FMP/SAJ ?

glad people are getting exposed to this stuff - thanks kinabalu!

will you be posting George's "Nomadic Winds" as well?

@Arcturus: Yes, that one is scheduled, but it may take a little while as I´m Africa at the moment. Btw, do you have scans of the first Jon Jang? I did get the files from you, but haven´t been able to find the covers on the net.

is it possible to re-post please?