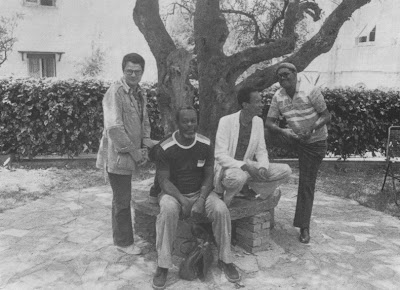 One of the greatest bands ever - and of course thanks for any and every Dewey Redman post-can never get enough.

Thanks a bunch for this jewel!

And yet another great post!, MANY thanks.
The funny thing is that I am italian and Nervi is simply a small place on the coast of Liguria but WHAT a year for jazz that 1979!

Thanks for this, Riccardo. I shall listen intensely. I do have the two ECM albums which I could post if there's an interest. I haven't checked on their general availability or whether they have been blogged elsewhere, mind you.

Yet another wonderful posting. Thank you!

how exciting, thank you for sharing this! -MB

and thanks riccardo for linking to the roio concert as well, you have made my week -MB

Hot File is OK while LessThanRapidShare reports the files as being copyrighted. Makes you wonder ...

again many thanks for this post (and the Ornette from Reggio). Your existence is always appreciated.

oh oh oh great music!!!! so fresh!!! thank you very much for posting

Thanks so much! I haven't visited in a couple of months. You've been busy! I strive to reach the levels this blog has...one of the greatest. Thanks again.

This is great! Thank you so much!

Great stuff! These gentlemen are as much responsible for the quality of Coleman's music as the saxophonist/composer himself (in free jazz, there is no leader).

Fabulous stuff. OAND was woefully under recorded. Thanks for another wonderful post.

Thank you so much once again! And all my apologies for those times when I forgot to thank you.

Any chance you could re-upload this gem?

A repost would be greatly appreciated. Thanks so much!

A truly needed repost for this incomparable and
so much loved (and needed) 4tet. This coming season?

A new live recording of Old and New Dreams during their residency at Harvard University. It was recorded at a very small club in Harvard Square. Here's the link -
http://undertheradarrecording.com/archive-recordings/old-new-dreams-jonathan-swifts-6-8-82/

Would love to hear this.

an interesting story about this post: an illegal cd hav been published that contains this post, this cd have been briefly distributed on amazon in 2016.. It is not the first time that some post of inconstant sol are used to makes lp or cd bootlegs. Can we be proud of this? For sure it means that this blog contains material of high value but the commercial and illegal exploitation of this is not in our spirit.

Thank you for this reup correct silence. All of riccardo's posts are most welcome. This one I don't have. So a very welcome edition for sure!!

Super thanks. Excellent recording and performance by one of my favorite groups.

Thank you for new upload, Jeff!