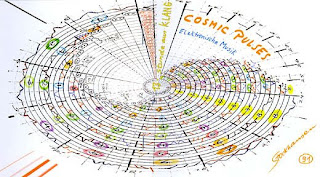 One of the most influential composers of the 20th and 21st centuries, Karlheinz Stockhausen would have turned 80 this year.

Aside from the performance of Punkte ('Points') by the Gürzenich Orchestra under Markus Stenz on the actual day that would have been the composer's 80th birthday (Prom 48), this Stockhausen Day offers a fuller immersion into the work of this uniquely uncompromising creative force. This early-evening Prom contrasts a pair of Stockhausen's early works - Gruppen ('Groups'), which passes ideas between three spatially separated ensembles, and Kontakte, referring to 'contacts' between instrumental and electronic sounds - with two recent works - both of them excerpts from Klang, the large-scale sequence on which Stockhausen was working at the time of his death last December.

In this Late Night Prom comes Stimmung for six amplified voices - the first work of Western music to be based on the harmonics, or overtones, that make up the sound-spectrum of a single note. Stimmung is a hypnotic piece for 'six singers and six microphones' that takes on a unique
atmosphere in live performance. Among the many influences which Stockhausen acknowledged when composing the work was a month spent wandering among the ruins in Mexico.

The Theatre of Voices - as adept in music of the Middle Ages as in new music - have made
something of a speciality of Stimmung, and Hillier's long association with the piece includes his
participation as one of the singers at a Proms performance 30 years ago.

This is a follow up to the Licht post made here earlier in which there has been much interest, judging from the number of downloads. Everything I have heard from Klang so far is sublime, not least Cosmic Pulses included here, and I have some other episodes if there is continued interest. I'd like to thank Tom Phillips who made this very high quality recording (demonstrating that digital radio can often exceed FM in quality) and seeded it on dime.

Absolutely terrific release as usual. But allow me a technical question: How can the FLAC conversion with bitrates in the region of 450 kbit and above be any better than your original MPEG-1 DAB recording at 192 kbit?

The music: I've been expecting "Natürlich Dauern" with extreme curiosity as it was announced as the first piece with 256 tracks-or so polyphony. In the end it sounds like any other electronic work by Stockhausen composed since Mittwoch in the mid-90ies. I can't hear much "progress" here and, funnily, it rather sounds like the crazy polyphony Conrad Schnitzler has achieved a long time ago. It seems like Stockhausen has finally discovered multitrack recording and mischanges using 256 tracks with 256-track polyphony. Just my 2 cents from a complete amateur. What do others think about this? And yes, sorry for my grammar mistakes, I'm not a native speaker.

There's no question that no lossless format can put back something that has already been lost. I don't think that's the issue, however, which is that a broadcast at 192 kb/s can and does rival FM quality. This may run counter to accepted hifi wisdom, but my own experience (in moving from a Naim NAT01 tuner to a cable feed for radio) seems to be very similar to Tom's.

I've seen a few different responses to Cosmic Pulses, some very similar to yours. My own view is that it sounds like nothing else I have heard before.

Thanks for your comments, and I hope the rest of the music is interesting for you.

I bought Cosmic Pulses on CD and was underwhelmed, however I attended this Proms performance and was blown away by Cosmic Pulses live where it is an altogether different experience. I was sat on a balcony and the bass pulses churned beneath me like behemoths in a pit, while the high register tracks twittered round the dome of the ceiling. I was convinced that I could hear vocal sounds somewhere in it all - although none were used in the composition as far as I am aware - which is just part of the magic of the piece live. Stockhausen has made a number of returns to earlier works and I have a hunch that Gesang Der Junglinge is being reprised/revisited somehow in this work.

Further to Adam's comments. I think what he is asking is that is there any point in posting a FLAC version is a concert that has been broadcast in a lossless format. I know that is often done on dime, but I can't see the sense in it. It increases the size of the download for no extra benefit.
PS - I won't comment on the music - not my cup of tea.

Thanks, T. The link at the bottom of the page led me to The Rambler, from whom I learned the sad news of the death a few days ago of Rumanian composer Horatiu Radulescu. A major voice in contemporary music. A serious loss. May he rest in peace.

Hi glmlr,
Sad news indeed about Radulescu. I know only a couple of his string quartets and piano concerto, but his voice is unique.
-- T

Fantastic stuff! Only the problem is that the links doesn't work anymore. Can you please reupload?

While searching for Stockhausen's Cosmic Pulses on another site I found a description of Stimmung from the 2008 Proms that really grabbed my interest only to discover the link was dead. Then I found your site with what appears to be the same performance but again a dead link - not my day! Is there any chance of a reup on the links? It would be much appreciated!

Hi Tantris. I'm as disappointed as Brian is. Hoping for a re-up when you can or if you can get to it.
Thanks- Ken.

i aslo had to add my comment praying for a re-up!

would love and take care of and give hugs and kisses to a re-up of this if at all possible!