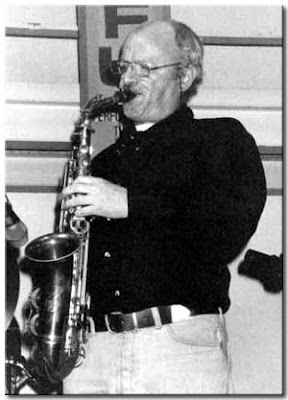 
Perhaps the most widely-known fact about Elton was that he gave half his name to a budding popstar legend. For those who don't know the story - in the 60s Elton co-led a band along with blues singer Long John Baldry. The band's pianist took half his professional name from each of these guys and went on to fame and fortune (whether these were deserved is a matter I won't get into).

Elton was an early member (though not a founder) of Soft Machine, and with the Soft Machine Legacy which was a reunion band formed around 2002. In the intervening years he played in numerous free jazz groups along with Keith Tippett and others in that circle. Newsense, which was put together in 1997 is a little unusual in having three trombonists, led by the great Roswell Rudd. Rutherford worked frequently with Elton in Keith Tippett's band, and Annie Whitehead is the best female British trombonist around.

The numbers on this concert are an interesting mixture of free group improvisation and big band arrangements. The brass blend together extremely well.

The guy who seeded this on dime (can't remember his moniker, but my thanks to him and to the original taper) did so on the second anniversary of Elton's death in 2006. Sadly, last August, Paul Rutherford also passed away. I think this recording is a fitting trubute to them both.

Sound quality on this FM recording is excellent. MP3 and Flac links in comments.

Ha, funny... I had this in my hands but then somehow it didn't end up on the last pile of uploads I prepared. Great minds thing alike :-)
Good to see it up here!

thanks a lot boromir.
Elton Dean's play is probably not as shrieking and free as some of his better known colleagues, but it's really enjoyable nevertheless.
and what a line-up! they work amazingly well together.

ready for a new one if there's more where it comes from.
thanks again.

Great. Elton was his own man. Thank you.

Hi, is a reup posible? Thanks!

Could somebody please reup this one?
Thanks a lot.

Looks like I got this from the same source as Boromir.

Thank you, Kin - this was posted by Boromir before I've joined the venture. And although we have now "only" 2847 published posts it's more than I've ever dared to browse ;-)

BIG THX!...
P.S. Kinabalu if you are in ics since the early days, heres another Boromir post that maybe you might keeped...
https://inconstantsol.blogspot.com/2009/01/jemeel-moondoc-live-medford-ma-1985.html

Sorry, I looked for that one, but couldn't find it. I do have some other Moondocs, though.

If you have more Moondoc shows post please!...
THX FOR REPLY!...