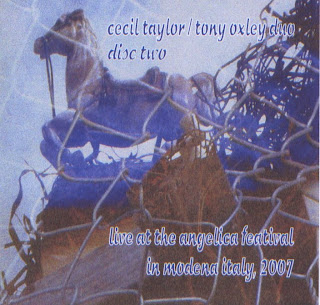 This is another post I'm making from music passed on to me by Dale (there's more to come!). For this reason I'm not sure about the origin. It's a very good recording quality, but there's noise on the track and drop out from time to time, which suggests a radio broadcast re-recording. The music is marvelous through out. I have mixed feelings about Taylor, but I loved this, and I find Oxley consistently interesting. Here they really spark each other. Taylor's such a percussive player that one could speculate that he wouldn't go too well in a duo with a drummer, but I wonder if the extra crash and clatter pushes Taylor into a range of other explorations. There's even vocal on part three. Not quite poetry; not quite Ra-ian metaphysical lecture; not quite singing. It certainly worked for me!

The art work was supplied with the disks, and as this isn't a commercial release, I think this is Dale's. Although he's a regular contributer to the comments section, I know he's had some computer problem, but some additional information would be very welcome when time and technology permit.

There are mp3s, and flacs for those so inclined.

Keep up the good job!

Yeah, I have been having trouble getting through. I got the Taylor/Oxley links from a friend of mine in an email. Typically he gets stuff from Dime and SoulSeek. But he also hits the blogs. BIG O is another of his sources. But in this case he didn't specify. Here's ALL he said:

He was right! I liked it.

But, where ever he got this, a BIG THANKS to him and ESPECIALLY the original uploader.

Now let's see if this makes it into these comments.

For those who would like a cleaner cover image (without the Word Text Art title) here's the url to the image on "Flickr."

Hi Wall and Dale!
Many thanks for this nice collaboration. I thought Inconstant Sol couldn't be better. I was wrong. All posts by people who made this blog possible are amazing but now with Dale… Terrific! I wonder what treasures you're going to post in the future.

I have got a lot of problems with my router. But I'll try to download this and McPhee post as soon as possible. Well and I have to download other posts, Boromir, Nad3170… Here is impossible to ignore any post. All are so good! I need another hard disk!

Hey Dale I've visited Flickr, I wondered if you had post more artwork. Is fantastic, And I enjoyed it a lot. All those textures. but I have to say I've fallen in love with Japanes Poetry 18. That must be a serie of pictures, I'd like to see more.

Thanks again!
See you!

Thanks, as always, for the lovely music. But there is a small problem. When I try to unrar parts 1-5, it asks me for part6. Is part6 available somewhere?

Thanks for this. Pls share part 6 rar. In the meangtime, If you all haven't you HAVE to d/l EARTRIP Vol 1 here:

Great reprrto from CT fan who follwed his tour through Italy.

I think this same concert is available (@mp3 320) elsewhere on this blog;

Not sure if it is the same source recording (a radio broadcast), or not, and it is of course useful to have a lossless version available.

and sorry for repeating a post (if this is the same). Though clearly it's new to some. Think of it as a re-up with some new comments.

Well, the dates and places appear to be different, assuming that the info is correct. The only way to know for sure is to listen to these two concerts, I guess ...

Here is another more recent CT/TO duo, in Berlin in February this year. Not as good as this one, both in terms of musical and sound quality, but still worth listening to;

The other is listed in your previous comment as being on 13 October, not on 11 October, and in Reggio Emilia, not in Modena.

Listening to Michel Portal - Turbulence - at the moment. Very nice. We gotta have some more Portal here. I'm thinking of posting the Chateauvallon 76 at some point ...

Yes, Tantris is right, this is the same as the post on March 2. Sorry about any duplication or con "fusion."
This is going to amuse some of you but I have TWO copies myself. One from the March 2 post on this site the other based on the email I got from my friend in Portland Oregon 2 or so weeks later. I had NOT realized that they were exactly the same until this discussion. I think my poor brain is music-super-saturated. Being swamped in CT music actually is kind of enjoyable and it certainly beats not knowing about or appreciating it. BUT I apologize to Tim and others for the mistake.

Just to clarify - the post I linked to included two concerts, one on the 11th October, and the other on the 13th.

And tonight in Modena, in this exceedingly lavish opera house full of red velvet and gold leaf, they soon get warmed up and tuck into that thing they do.
It stays rather light and almost pretty. Ct doesn’t go straight into his heavy heavy
clusters and runs; he’s doing all these delicate little figures with lovely little twists at the
end. Oxley for his part, don’t respond to ct in a pointillist moment by moment way, he
does his thing, but he is right in there with ct and he’ll turn on a sixpence if ct moves in
certain directions. They’re weaving this very tight knit mesh of sound. And ct seems
happy and relaxed, like he has every faith that Oxley is gonna stay with him, but
confident too that Oxley is behind him, or at the most alongside him and never ahead of
him driving him on.
Yet there’s something about the relentless ever-shifting polyrhythmic layers that
Oxley provides that is driving, or at least cushioning ct all along the way. I imagine
there’s some kind of chemistry at play here, cos I don’t think Oxley is gonna be phased
by ct, but on the other hand I think Oxley isn’t into the world of egos and those kind of
clashes, so he doesn’t clash with ct but he also doesn’t annoy him by being intimidated
either. Oxley often takes long admiring looks at ct and smiles broadly and warmly. I
don’t spot ct respond visually to any of this, but he’s roaming around the piano, full of a
certain energy and drive that is about dynamics within the music and not about anger or
other emotions.
At some point during the gig ct gets into that crashing rumbling thumping thing
he does and this seems to be prompted by the ongoing build up of musical energy Oxley
is creating with him. But, but but………..something is missing from ct’s music now, for
me anyway. And I find my attention drifting in a way that I’d not expect with ct’s music.
Even on disc, I find myself riveted to ct’s music mostly, specially [and I’m loathe to say
25
this] the old stuff that seems so emotionally charged and intense. So here in the opera
house, I’m not on the edge of my seat by any means, and my attention even wanders, so
there are whole periods of time when I’m elsewhere in my mind and then I remind myself
to come back and listen.
They play for about 45mins I think. And then ct stands up abruptly, as he does,
and walks off, with Oxley, following on his heels resembling somewhat an obedient
hound dog. The audience explodes, in a way the music didn’t, and they keep on clapping and
whistling determined to wring an encore out of the musicians, all of us I guess, very keen
to get more than this before we leave. I’m thinking we may as well keep trying though I
know we’re totally dependent on ct’s mood and all the roaring from the stalls wont sway
this. Then a guy wanders on stage and says we can keep on clapping if we like, but this is
actually only the interval. It occurs to me somewhere within the four days of ct gigs that, whereas ct’s music has become terribly predictable for many years now, [for most of his career, some would say] what is utterly variable is the presentation. Tonight he’s gonna do 2 sets, and deliver a standard show it seems. Or maybe he’ll come back on and torment us with some more
poetry, or maybe he’ll just send Oxley on to do a solo, or maybe they’ll just do 5 minutes
of some nice ellingtonian tinkling [more and more of which I seem to be hearing in the
music these days???] and ct will get up and leave. They take a long interval, at least half an hour I think and come back and play a full on forty five minutes or so of a second set in the same mode as the first. There are some natural stops and starts where ct seems to take up a new refrain or theme, having rustled through the bits of paper on the piano music stand and then they cook away with their individual rhythmic tapestry. Again my attention wanders some times. Oxley uses his electronic device which echoes back what they’re doing on some kind of delay. And
again he looks so happy with ct and with the music. I think what’s happened here, is that
ct has become a European improviser. I think this began in the late eighties when he
found all these European improvisers who could meet him musically and even
technically, they could hear him and they cold follow him. But they didn’t necessarily
share his story, his social raison d’etre, or his anger, but they utterly understood the music
and it presented no problem to them whatsoever. And I imagine this must have been so so
nice for ct to come home to. But now I wonder, if he’s lost summat by stepping out of the
American jazz fold so utterly. But on the other hand, for chrissakes, he’s found some
peace here I guess, and a man can’t stay in pain all his life, least of all to satisfy the
spectators of the atrocity exhibition [one of whom might be if I’m not careful.]
I wander the pleasant streets of Modena back to my hostel and I reflect back on
the pleasantly sophisticated music I’ve been with this evening. Modena is a quiet town so
11 at night feels late and there’s a pleasant and safe, sleepy feel to the streets, which I’m
very much enjoying after the brutal urban landscape of Bologna.

Is a saxophonist, has been involved in improvised music in the Bristol
area for a number of years. Published in EARTRIP Vol. 1

thanks for the clarifications. That means I've got two file sets of the same concert. Oh, well. Fortunately, hard disk space is not an issue around here.

Can you reupload please thanks in advance. ..

I like to assist the "shark" in his request.

It would be much appreciated.

For the fisch, oxleydlib and Colin:

Thanks for this and both Jarman repost. All are great!

Is it possible to do a reup of the February 2008 concert mentioned in the comments above?