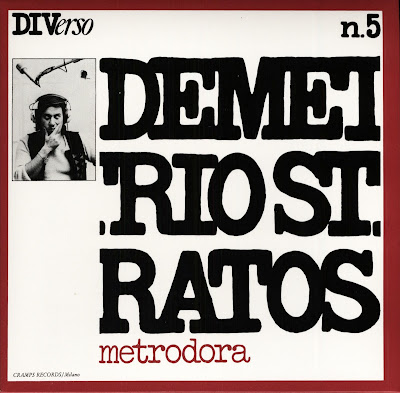 I remember hearing it for the first time ... The Voice ... 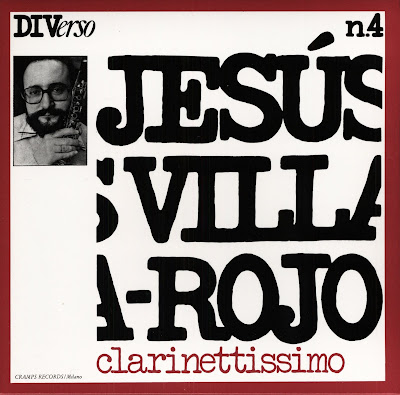 There were a couple of requests for a repost of this concert, so here it is again. 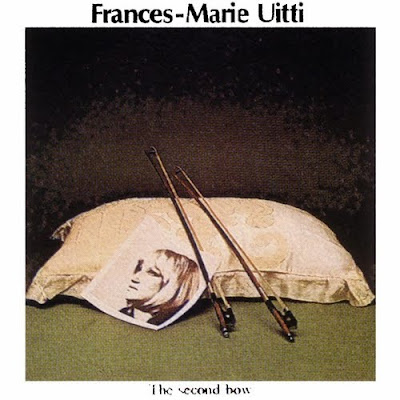 Two more in the Cramps thread...

This LP has never been reissued - not even in Japan, where almost all other Cramps releases saw the light of the day anew in 2007.

In 1995 Frances-Marie Uitti released a CD "2 Bows" (BvHaast) were she continued to examine the possibilities of playing with two bows at the same time. According her website you can get it from www.jdkproductions.com

If you like this LP you should certainly check it out.

More info and other CDs you can find on her own website > http://www.uitti.org/ 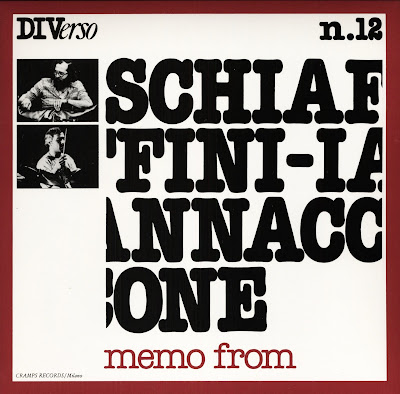 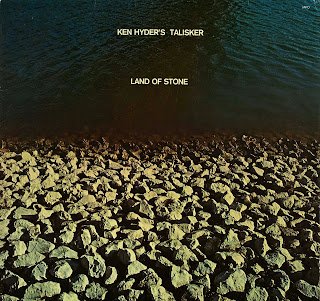 Back in February, I posted the "Après La Marée Noire," a collaboration between folk musicians from Bretagne and Francois Tusques and the Intercommunal Free Music Dance Orchestra. I'd like to stay at the intersection of jazz and folk music a little longer, but now we'll move to Scotland and Ken Hyder's Talisker. Their first record was done for the Virgin label in 1975, rereleased on Reel Recordings a few years ago. So we'll move to their second record, released on the Japo label in 1977 and to my knowledge not made available on cd. This record was made possible by a grant from the Arts Council of Great Britain which enabled Hyder to do research in the Scottish Highlands and the Western Isles.

To properly describe what's on this record, the best I can do is to reproduce Charles Fox's instructive sleeve notes:

The Strathspey King celebrates J. Scott Skinner, king of Scottish fiddlers at the start of the century, as devoted to syncopation as an Afro-American. Hebridian choral music provides the basis for the The Men of Barra, with Minton, Nichols, Eley and Armstrong singing either individually (in that order) or as a group. All ten performers sing at the start of Close the Windows, using the rhythms of a 'waulking song', originally sung by island women as they worked the tweed. See You at the Mission begins and develops like a Gaelic psalm, unitil, once again, instrumentalists take over from singers.

Derek was Only a Bairn, shifting from the pentatonic scale to the Aolian mode, is linked by the bassists to Pibroch In Three Parts, inspired by Ken Hyder's conviction that Scottish bagpipe playing originally involved improvisation. The MacCrimmons were hereditary pipes to the clan McLeod and the scale used in this section corresponds to a bagpipe scale. The drone changes for the next part (the Lydian scale employed here was a favourite of Coltrane's), while the final section (for Ayler) is the freest and loosest of all, with Davie Webster's solo communicating that emotional intensity which seems common to both jazz and Scottish music at their finest.

1. The Strathspey King
(drum solo linking passages)
The Men of Barra Know How To Drink But The Women Know How To Sing
2. Close The Window And Keep It Down
3. See You At The Mission, Eh, If It's No' Full

Side 2
1. Derek Was Only A Bairn
(bass duet linking passages)
2. Pibroch In Three Parts
a) for the Mac Crimmons
b) for John Coltrane
c) for Albert Ayler

Philological footnote: "Bairn" is very close to the Scandinavian "barn", meaning "child" in modern English, and is still used in Scotland and parts of Northern England. 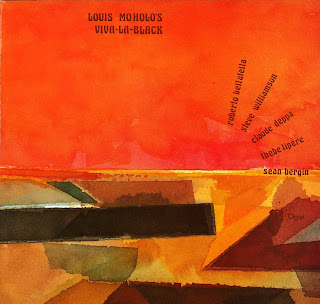 We had a request for this album in our requests section, described there as "completely obscure." As this blog thrives on complete obscurity, naturally we had to post it. This was Viva-La-Black's first album, folowed by "Exile" which recently has been rereleased on Ogun. Incidentally, this was the last vinyl album Ogun ever released as cds came to replace vinyls as the standard music reproduction format.

What we have here is a wonderfully varied album. Starting on the A side, we have the stately "Tristan's Line", followed by the lilting swing of "Joyful Noises" and rounding out the first side is the split-second (it's not over when you think it is) precision of "Mongezi-Frames Part One". Flipping the record over, figuratively speaking, we get the elegiac "Lost Opportunities" (my fave), the companion piece to "Frames", "Mad High" and rounding out the proceedings is the propulsive fast-forward shuffle of "Woza". Very accessible, very enjoyable, all in all, and an item not to be left to the dustbins of history, in my opinion. Fine musicianship all around, but a special mention of the very fine sax work of Sean Bergin. 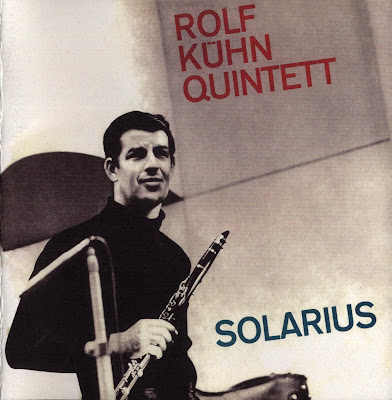 Another "lost" gem from the GDR - never reissued in Germany.
All compositions provided by one of the Kühn brothers except "Sie gleicht wohl einem Rosenstock" (~ 'she resembles - no doubt - a rose tree'), which originally is a folksong. 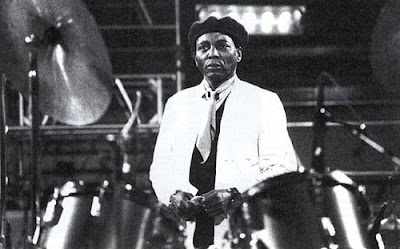 Concert divided into two sets for the length.

I Wish I Knew 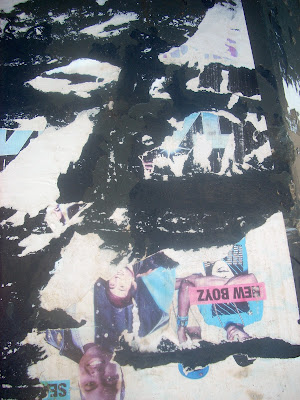 Recently uploaded by request for a Friend,another transcendent set by the great musical Alchemist/Shaman Tony Oxley who is one of our very favourites here at IS.
For me this is transformative ritual urban folk music ,for a decaying civilization.
FM BROADCAST in brutaly vivid ,superb sound quality..almost terrifying in its intensity.

Originally downloaded as a torrent from Dime-a-Dozen, thanks to the original taper,seeder, traders. 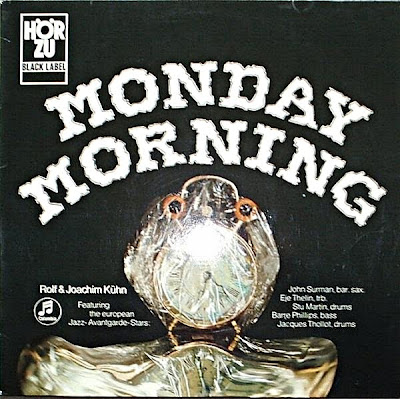 
Recorded : November 1969 in Berlin.
(On a morning after a concert at Berlin Jazz Fest -
the J.Kühn Quartet had a concert on 06.Nov. -
they played "Suite to our Father Duke" -
so the actual recording date should be the 7th November 1969.
Track 5 is dedicated to Duke Ellington.) 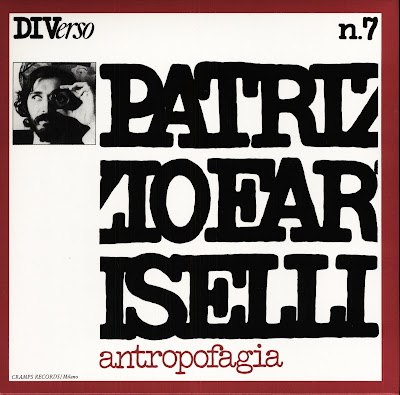 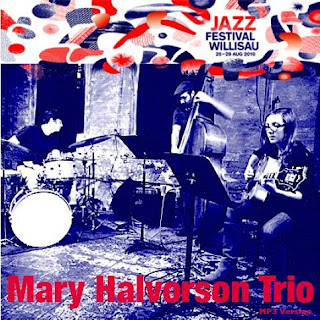 For all those who haven't already heard this great concert.

Sequential Tears In It (no.20) 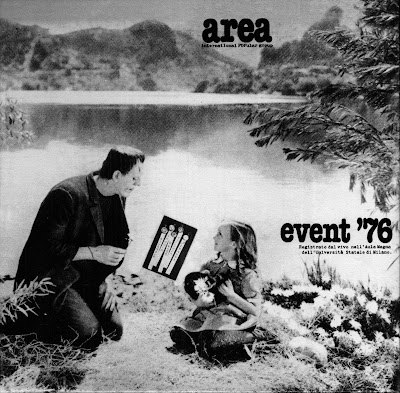 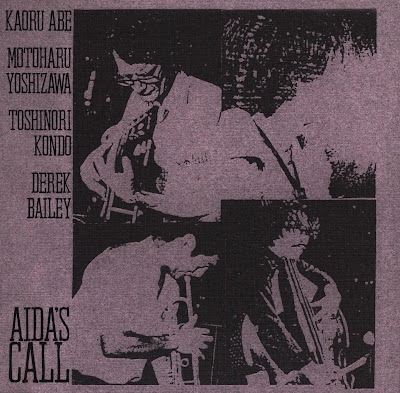 
Recorded live at Michada-Kavalinka, Japan on 3rd May, 1978. 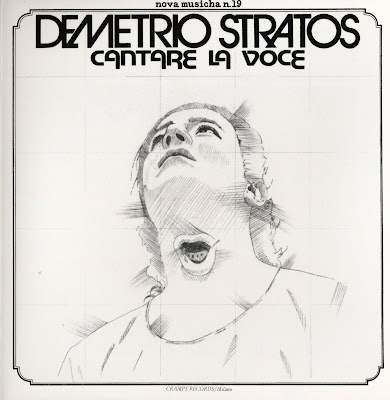 This is the third installment of the Cramps series.

For me he is THE VOICE I admire the most.

Born and raised in Alexandria, Egypt, of Greek parents, he studied piano and accordion at the "National Conservatoire". In 1957 he was sent to Nicosia, Cyprus, and, at the age of 17, moved to Milan, Italy, to attend the Politecnico di Milano University at the Architecture Faculty, where he formed his first musical group. In 1967, Demetrio Stratos joined the Italian beat band I Ribelli, and in 1972, founded Area.

He studied ethnomusicology, vocal extensions, Asian music chant, compared musicology, the problem of ethnic vocality, psychoanalysis, the relationship between spoken language and the psyche, the limits of the spoken language. He was able to reach 7,000 Hz, and to perform diplophony, triplophony, and also quadrophony. Daniel Charles has described him as the person who decimated monody by the demultiplication of the acoustic spectrum. His vocal abilities were explored and documented.

Stratos died in New York City Memorial Hospital on June 13, 1979 at the age of thirty–four. His mission was to free vocal expression from the slavery of language and pretty melodies. He considered the exploration of vocal potential as a tool of psychological and political liberation. His study of the voice used as a musical instrument carried him to reach for the limits of human capabilities. The amazing research of Stratos brings many suggestions of unexplored fields of research that are still to be studied.

(from : http://en.wikipedia.org/wiki/Demetrio_Stratos - go there for more information) 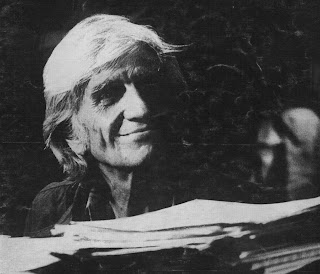 Every meeting between Evans & Lacy has produced memorable music, as during that 1981 summer. 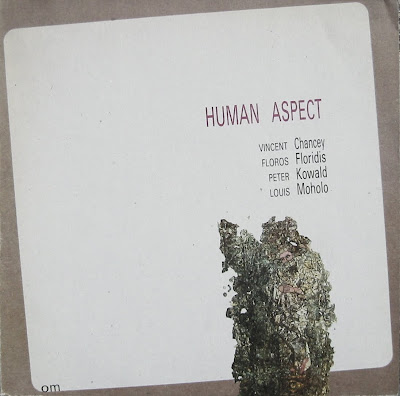 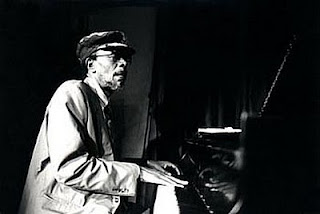 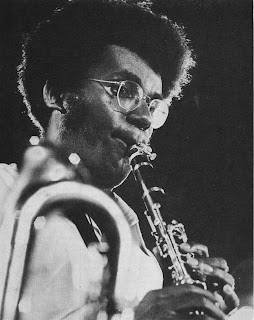 A classic among the historical lineup of A.Braxton. 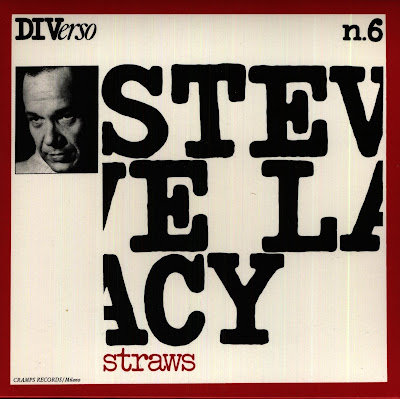 This is the second post of what will become a small thread of Cramps recordings. 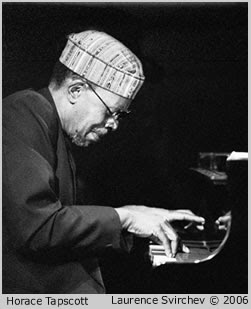 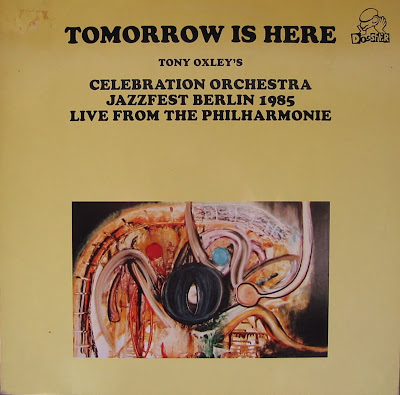 A veritable all-star band - an all too rare recording by one of the greatest living drummers.

Subtle and burning - reeds and strings - a great plethora of percussive meandering - a classic! 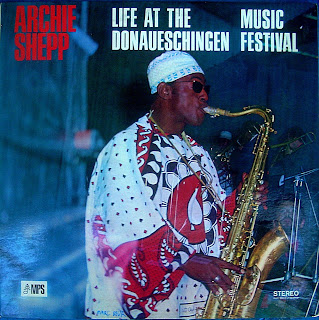 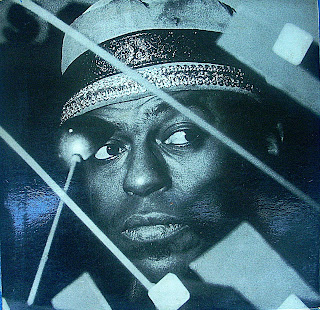 This is for tony , who privately requested a re-up of 'One for the Trane' posted by Boromir as MP3'S a back in 2008. this is the very same record , in its original form on Saba/MPS . a real Gem by one of Archie Shepps best bands of the day , which unaccountably has never been reissued on CD outside of Japan.
What a joy to hear R.Rudd and Grachan Moncur tailgating each other and Shepp... Apparently this particular year at Donnaueschingen , was germany's real intro to the second wave of American new thing, and many in the Audience were outraged.. if you listen closely at certain points ,you'll hear a low but steady barrage of booing and jeering ...

"all of a sudden it became obvious that the battle fronts had reversed themselves under the onslaught of Free Jazz : under the impact of this music even the most serial , aleatoric and Electronic works now belonged to the the small fixed world of the establishment"
"Prof Strobel, the distinguished head of the Donaueschingen program, had specifically called for a shocking program. Well, it turned out to be such a shocker that he him self was shocked. Archie Shepps wild atacca on the Spiessburgerlichkeit and self satisfaction of the white world,with all the snobbism that goes with it-the respectably "normal"Donaueschingen audience was left limp by this outburst at the end by a three hour concert"
Joachim E.Berendt (from the liner notes) 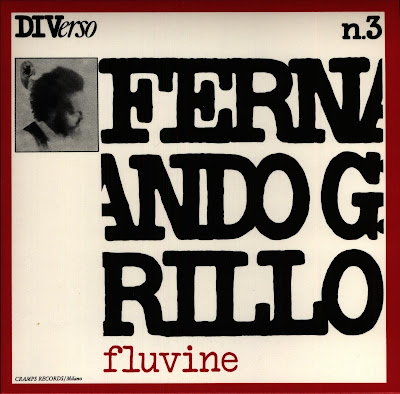 It may seem unlikely but this CD (then as a LP) was my first exposure to music made by double bass solely. Since this "satori" some 25 years ago I have heard a bunch of sometimes outstanding solo outings by bassists. (K.H. Stockhausen once called F.Grillo the "Buddha" of the double bass).
There's a buddhist proverb which goes roughly - "If you meet Buddha kill him" - in this case I would prefer to caress him.

Today it seems he's concentrating on his personal vision of baroque music.
There are not many available recordings with him in a contemporary setting. One exceptional exemple of his skills can be heard on Iancu Dumitrescu's first published CD, where he plays a grandiose interpretation of "Medium III" - strongly recommended. 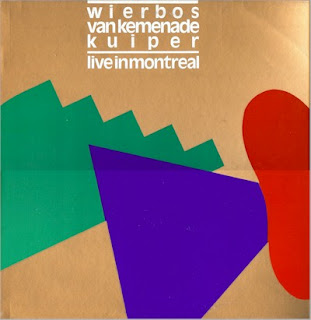 "... one of the few original moments of the festival, since this group had something else to say than almost anybody else." (Marc-A. Chenard, Coda 210, Oct/Nov 1986)

Owombat says: it appears from the musicians comments, that the concert started with the music on the B-side of the LP. 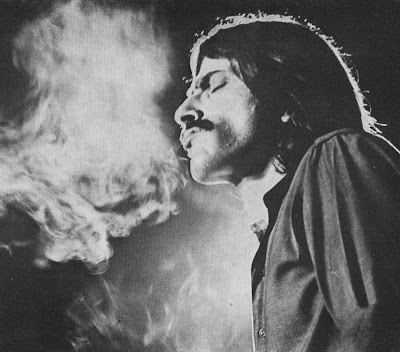 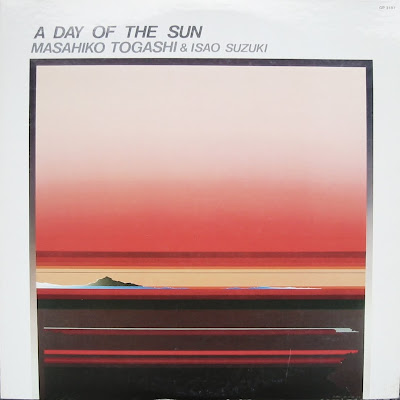 MASAHIKO TOGASHI & ISAO SUZUKI "A DAY OF THE SUN" 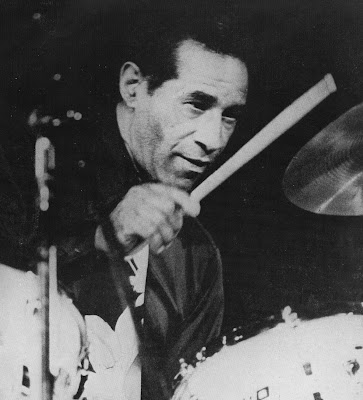 Dedicated to all fans of Max Roach & Company.