Someone will notice that this recording was taped
the same day of that i've posted on June 29
(Don Pullen/Joseph Jarman/Don Moyè - Live in
Frascati '78) : indeed the Frascati was a morning
concert (about 10 a.m.), so here we have the curiosity
of the same tune (a favourite of mine, for evident reasons)
played twice in a day by the same player,after a 600
kilometres journey.

The other side of Sam Rivers : compositions and
arrangements for large orchestra.

"I remember trying to explain my concept of M'Boom to people
at the record companies, and all anybody knew was that each
man had a solid reputation as a trap drummer. And so when the
record came out, they were trying to figure, well how do we
market this ? Because we didn't have a sax player or a trumpeter
or a piano. "Is it Jazz?" No, it's a percussion ensemble. We just
wanted to see if we could come up with enough music from that
style of instrumentation.
So the marketing people decided to put M'boom in the audiophile
bin, so people with sophisticated equipment could hear all these
big drums and the little bells and shakers; the sounds of skins and
metal and wood and all these devices that make sense within the
fabric of each piece.
With M'Boom, the idea was to put the drummer on the front line.
We wanted to step up and showcase our musicality. Soon members
of the band brought in pieces that were multi-layered, with
numerous metrical changes and variations. And we had a wonderful
array of instruments : a big bass drum, two bass marimbas, an octave
of concert toms, five timpani, vibraphone ans xylophone, symphonic
bells, steel drums, musical saw, Afro-Cuban percussion and dozens
of small instruments." Max Roach

A duo active between the end of the seventies and the
early eighties, that sometimes turned to trio with the
addition of Austrian trumpeter Franz Koglmann. 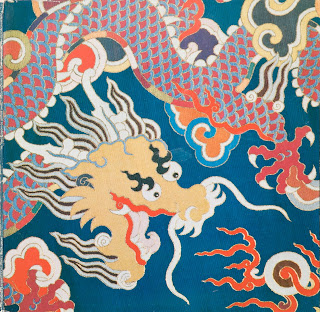 Here's a very interesting item supplied by "inamorata" who agreed to write a little intro to this record:

This is a rather peculiar record, and a strange context for Sam Rivers to appear in. It may not be exactly rare (there is a copy on offer at *bay right now for USD 19.95) but definitely has not left many traces on the WWW. Here's what Rick Lopez in his amazing Sam Rivers Sessionography (http://www.bb10k.com/RIVERS.disc.html) says about it, quoting Anthony B. Rogers (I included the whole entry with the files):

The soloists are Sam Rivers, Elliott Randal, Kenneth Bichel, Richard Davis, and Warren Smith. The score by Carman Moore is played by members of the American Symphony Orchestra conducted by Isaiah Jackson. Although it has a jazzy tinge, it is not at all what one would expect from the list of soloists or, more specifically, the presence of Sam Rivers. I find it strange and fascinating and quite nice, but judge for yourselves.

The LP was recorded on February 29, 1976 (again according to Rick Lopez), right in the middle between what I consider the absolute high points of Sam Rivers prolific oeuvre: the IAI duo sessions with Dave Holland (February 18), and the Quest session with Holland and Altschul (March 12--13), both featuring the most intense and intimate musical communication I can think of.

I was lucky enough to find a well-kept copy and ripped and cleaned it very carefully (all remastering was done in 24bit resolution). I'm glad to share it here with the kind help of kinabalu. To him and to all other contributors here I wish to express my gratitude for the amazing amount of fine and rare music I got from this blog. I am mostly too busy to leave a comment, but this (and , hopefully, some future indirect contributions) is my sincere thank you to all of you.

A little (and tardy) homage to the late Rashied Ali :
a solo performance during the 8th Moers Festival.

William Parker's Raining on the Moon - live in Rome 2004 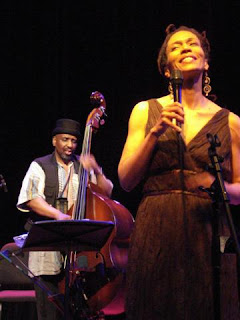 After Riccardo's post of Leena Conquest in Rome, I thought we definitely should have some more Leena Conquest in Rome. Bit of a toss-up about whether to go for the 2004 or 2008 concert, so here's the 2004, and if this one catches on, we might throw in the 2008 later on. I should say I caught the 2008 version roundabout the same time as the Rome date, so obviously two dates on the same tour.

As far as the William Parker oeuvre is concerned, this is, one might say, from the more accessible part of it. His Raining on the Moon ensemble is an conscious, deliberate attempt to draw upon a wider palette, to incorporate elements of the black musical heritage beyond jazz, in particular vocals and lyrics/poetry in the standard jazz ensemble set-up. Here it veers towards soul music in passages, recalling that one of Parker's many projects is a tribute to Curtis Mayfield. For those who enjoyed this set, I should recommend my earlier posting of Nicole Mitchell's Black Earth Ensemble, another project of exploring the width and breadth of the heritage - the latter Chicago-based and applying the banner of "Great Black Music - From Ancient to the Future". Parker is New York-based, but his vision and imagination is very much along the lines of his AACM compatriots in Chicago, extending beyond music-making to activism and community-building among his fellow NY jazzers.

John Tchicai and The Open Orchestra - Live in Ceglie '08

An original project for the "Ceglie Jazz Open Festival",
that gathers together some of the best Italian
composers/improvisers with an "Old Lion" of the
free-jazz scene.

A wonderful recording that "Ilario" sent to me some
days ago : for the outstanding sound quality i've thought
that the wav format was absolutely necessary, even
because listening to Dave Burrell playing a Fazioli piano
is just a delight!

Live broadcast recorded at Sala A of CPRF in Via Asiago 10,
Rome, Italy, on December 4th, 2008

All composition by Dave Burrell and texts by Monika Larsson. 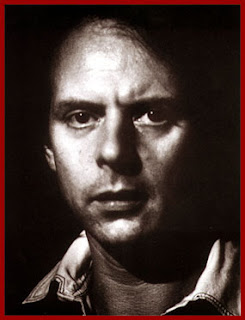 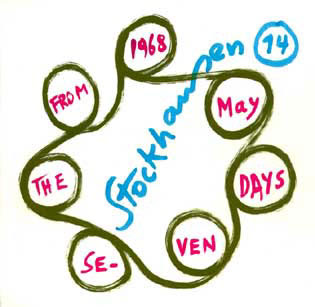 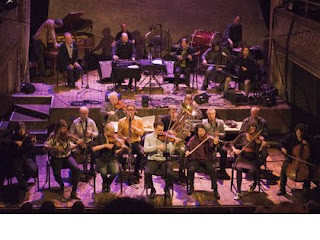 This post was somewhat inspired by my earlier Michael Portal posts and by the fact that he participated in the original recording of this multiple-part work back in 1968. The original version, transferred to cd, can be ordered from the Stochausen Verlag alongside his entire discography which runs close to one hundred works. The idea behind "Tagen" was to produce instinctive music, made up on the spot, not in any way preconceived, though certain instructions were given by Stockhausen, not about what to play, but what mental states to reach and inhabit in order to play as instinctly as possible, as attuned to the inner microcosmos and the outer macrocosmos as possible. The result was, and is, astounding, forty years later. The grainy, slightly murky sound of the highly closeted environment still stands out, the room having an aural ambiance of its own.

As for this performance, it's hard to say and to judge whether this is a recreation or reinterpretation of the original work, though the text below indicates that some of the prior instructions were indeed followed. This was recorded and uploaded by former contributor Tantris, so a big thanks for that. His accompanying info file is reproduced below. On a personal note, I'm happy to say that I've witnessed two of the performers upfront over the last year or so, Phil Minton and Maja Ratkje, both here tending to vocal duties. Special performers, both of them!

The first piece is performed by Neil Luck and Matthew Knowles, who will prepare, as instructed by the composer, by fasting and remaining solitary for four days beforehand.