For "jazz flute" lover(s) here is a very good concert
by one of the finest groups (in my opinion) of the
late seventies. The highlight is, without doubt,
"Meditations on Integration" : tribute to the Genius
passed away few months before. 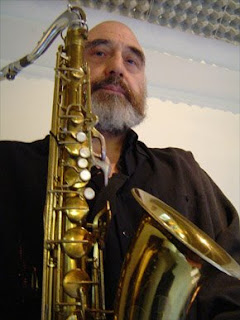 This was dropped in the comments section by Sotise:

Kris Wanders ...was an original member of the Globe Unity Orchestra, was a close friend and cohort of Broetzmann, Van Hove , and being Dutch ..Breuker and the ICP people too.

he seems to have got tired of the European rat race , travelled to north africa ..the Americas and South-East Asia, before finally settling in Australia.

I recorded this show with Wanders Permission, and its been and gone at DimeAdozen. 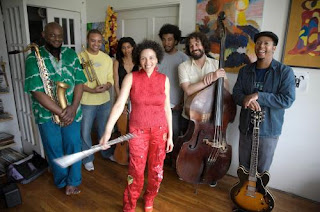 We had a request from Yelizev for "jazz flute" so I thought that might be a good pretext for posting Nicole Mitchell on this blog (as if one is needed). Nicole Mitchell is a second-generation AACM member which will fit nicely with the former post of AACM founder Muhal Richard Abrams.

Here's an introduction to the BEE from her official web site (from where the above pic is taken): "Nicole Mitchell’s Black Earth Ensemble (BEE) is a musical celebration of the African American cultural legacy. Founded and directed in 1998 by creative flutist/composer Nicole Mitchell, BEE has performed in festivals and art venues throughout Europe and Canada and in New York and Chicago. BEE’s music embraces the ancient past and paints visions of a positive future. The music is the weaving of swing, blues, avante garde jazz, bebop, African rhythms, Eastern modes and Western classical sounds. The name “Black Earth” was chosen to honor the feminine source that our lives depend on—Mother Earth. The purpose of Black Earth Ensemble is to inspire the human spirit with thought-provoking beauty and to present a positive, healthy and culturally aware image of African Americans. As a woman-directed, co-ed, multi-generational group, it touches a range of emotional spaces rarely expressed in a “jazz” setting. Black Earth's message is intended for audiences of all ages and backgrounds. "

Wonderfully recorded by my dear friend "Ilario",
this Muhal's concert remains among the best things
i've never listened by the Great Chicagoan pianist.
A true lesson about piano jazz and not only.
Higly recommended !
(the day after concert [February 11th] in the next future)

My second and last contribution at the musical
story of M.Portal : a single piece, since the
concert devoleped as a long (very long) medley.
Terrific work by the couple Francioli/Favre,
at the level of the most famous Holland/Altschul
or Parker/Drake.

Just a little help to kinabalu for covering
a bit of ground in M. Portal's musical story :
this is the first of two concerts, by the great
French musician, i've taped.
Really, more than a concert, this duo with
B.Lubat is an happening with moments
remembering the theatre of the absurd. 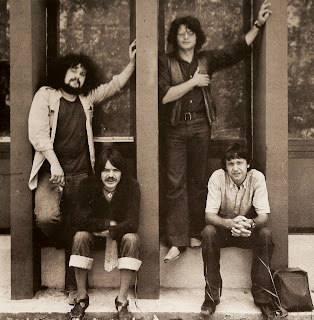 I've posted a set of the Michel Portal Unit from 1974 before, so fast-forwarding to 1976, here is a set live at the Willisau Jazz Festival on 27 August 1976. The line-up is as follows:

Portal, Lubat, Francioli and Guerin are in the picture above which adorned the front cover of the Chateauvallon 76 lp. In addition, Pierre Favre is in this line-up (as well as on the former Unit album from Chateauvallon 72) and last, but not least, Albert Mangelsdorff is putting in a fine performance here.

In essence, one long piece, cut into three on this upload from ........... As with the 1974 concert, a strong rhythmic pulse, driven by two percussionists and two bassists and a flowing shift between genres and styles, never losing sight of the melodious touch. At one point Portal is grabbing the bandoneon to insert a bit of folkiness and the final piece ends on a smoochy note with what sounds like fireworks erupting in the background. A communal feel to the unit with no leader calling the shots all the time and with enough space for everyone to throw their bits into the ring.

More to come from Portal for sure. I'm planning to do it chronologically, so we'll end up in 2009 for sure at some point in the future, but lots of ground to cover before then.

Thanks to IS i've met again (after many years) an
old friend of mine : "Ilario"
"I" has recorded all the Roman concerts, while i
was active in north Italy. This recording is the
first result of our new (and i hope long lasting)
collaboration.

About the music : probably this has been the first
concert held by Borah in Italy (the day after i've
listened to him in Milan but, unfortunately, i've
lost the tape). A totally unknown pianist (at that
time) for the European audience but a Real Giant!

A brief but intense set by one of Greatest
of the European scene.

One of the rare performances in duo by these
two Greats of the AACM.

After Bill Dixon another rather underrated Master :
John Carter, here together a young Theo
Jorgensmann (German clarinetist).
This concert was part of the morning projects at the
8th Moers Festival.

This (short) concert was taped few days before that
published on the double LP/CD "In Italy" by
Soulnote. An outstandig group including another
historical icon of free jazz (Alan Silva), a versatile
drummer (Freddie Waits) and three young students
of the Great trumpeter.

This was the first time I saw Betty Carter in person
and since that evening i've always thought that she
has been the greatest jazz singer after Lady Day : i
had the occasion of listening in concert to E.
Fitzgerald,S.Vaughan,C.Mcrae,J.Lee etc. etc.,
but no one never impressed me as Betty that night.
I hope you could enjoy the recording.