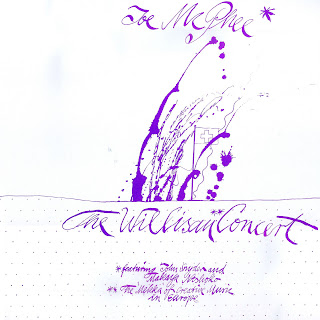 To complement Dale & Wallofsound recent McPhee posts, here is the second Hat Hut release. Standing between "Black Magic Man" and "Tenor" is not an easy place for a record in a discography but this one fits quite well. The formation is a trio, with McPhee playing tenor and soprano, John Snyder on synthesizer and processed voice, and South African Makaya Ntshoko on drums. For those who don't like synthesizers, be warned that it is not used here as a gimmick or as decoration. It has a very big, uncompressed sound typical of the experiments of the 70's and at times it feels like it is the center point of the music, at least in terms of sound mass.

It has been a long time since I posted on Inconstant Sol so expect a lot of nice material in the near future. In the meantime, hope you enjoy this one.


Note : I wanted to post K. Curtis Lyle & Julius Hemphill until now very rare "Collected Poems for Blind Lemon Jefferson" M'Bari LP as a complement to "Dogon A.D." but I found out that it has been reissued by Ikef records. The label does not seem to have a web site but is widely distributed.

High definition scans in both archives.

Go going Pierre. Thanks for filling the gap.

I was looking at my LP cover and I think the 1st tune on side B is titled: "Bahamiam Folksong".

By the way thanks for the FLAC on this one. Often MP3s are good enough but not in this case.

Still misspelled it!!! Darn it.

IMPORTANT : DO NOT DOWNLOAD THE RIP I POSTED, AFTER LISTENING TO IT I FOUND OUT IT WAS VERY FLAWED (digital clicks). THIS APPLY TO BOTH VERSIONS. I'LL REDO A CLEAN RIP TONIGHT AND WILL POST NEW LINKS.

Here are the links to the redone rip. Clean one this time, sorry to all for the mistake.

Dale,
In fact I had hard times deciphering the hand writing on the cover. It make more sense that it is "Bahamian" than "Baliamian" though. But Bahamian as in Bahamas ???

And would you happen to have the next volume in this series (Rotation) ? I heard it is quite good.

pierre ,thanks alot for this its a great album which until recently ive only been able to hear from an mp3 160k source .. nice to have the upgrade and the original covers.
best
m

Hello Pierre...Yes, I have a copy of "Rotation" and I will try to get my friend to digitize it very soon. He does a good job but he's kind of busy so it might be a week or so before he can get around to it.

Does Bahamian suggest Bahamas? Probably; that would be a reasonable assumption but I don't REALLY know.

hatHut cover art was kind of funky during those early years but it was distinctive and I liked it. They remind me a little bit (in both senses) of early ICPs OR, for that matter, the much later "Screwgun" stuff by Berne -- "artistic" and often a little hard to read.

Great Dale, is "Rotation" as good as the others in the series ?

If "Bahamian" does reffer to the Bahamas, the question is : does Bahamian folk music necesseraily includes ryhtmic sequences coming from a synthesizer ? Hehe, who knows ?

Thanks so much for this, and for offering it in flac. I look forward to hearing it.

Many - many thanks Pierre & all! This is magnificent.

I saw Joe McPhee in Montreal this past Winter in a free concert part of festival in an art gallery. He was with the trio Undersound (with Dominic Duval on bass & John Heward on drums). Very strong concert, combining totally free moment with some moving citation(s) of Ayler in the whole. I shook his hand after the concert, manifested my deep love and interests and talked to him about his recent collaborations ("Two Bands & A Legend", "Cato Salsa Experience and The Thing with Joe McPhee") and reissues on Atavistic [http://www.atavistic.com/artist_details.php?id=85&c=M]. He told me that those reissues were very successful and - most important! - others are coming in the same collection. He also confirmed me that his concert (wich you can see on Youtube) at the Molde Jazz festival in 2007 with drummer Paal Nilssen-Love will be officialy release in the near future.

Great man and musician. One of the top right now... on earth! Cheers.

Hello, I got to this important blog through jazz nekko place. First of all, thank you so much for this important post. I'd like to let you know that side b, second song (I mean B2) is missing in the flac files. Regards.

Sorry, the problem was with my "unraring" because a download failure, I believe. I downloaded the files again and everything is in place. Beautiful (and important) record. Thanks a lot again.

to cut the matter short: this simply is one of the best sites I've ever found in the internet, a ray op hope in the dark!

Hi nad thank you for this one

Hi again!
Would you please consider a repost? I have just discovered this marvelous artist!

Hi.
Could you upload it again?
Thanks

Reup would be greatly appreciated. Thanks!