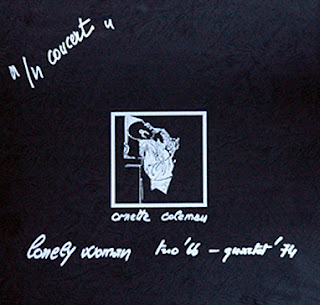 This tour with James Blood Ulmer is from a transitional period between the acoustic groups and the electrified bands of Tales Of Captain Black and Prime Time.

There are videos from the Rome concert on Youtube.

An LP release from the Padua concert on the tour suffered from the guitar being poorly audible.

A concert recording from Keystone Corner, San Francisco in September 1974, has also been circulating, with David Williams replacing Sirone and playing both acoustic and electric bass.

However, this is my favourite from the year.

Recorded live in Valenza, Italy 1974. Compiled with a 1966 trio live recording as part of a 4LP release.

Thanks for your work presenting this session. Much appreciated.

Some rare gem, thanks for sharing!

Thanks a lot to you Nick !

I suppose it's Valenza, near Alessandria, not Varenza

Thanks anonymous - I missed that completely

Many thanks and best wishes,

Fred Williams (not David) is the bass player on the Keystone tape.

I was going on Bells Free Jazz and David's Bio that he was playing with Ornette at that time.

Plus John Litweiler has David down for the summer tour of 1974 (The Harmolodic Life, p 140), which would be Laren Jazz Festival and Jazzfestival Middelheim in mid-August, with Keystone Korner on 4 September.

terrific group and fantastic music! Can you upload 1966 trio live in Copenhagen on BAT 1? Thanks Nick.
jazzer3ogun

Wow thank you. I've only ever seen the youtube video of this group -- looking forward to this.

This is a real treasure! Thanks!

Thank you! The Ornette's Roma 1974 Youtube clip is definitely one of my favorites. Really looking forward to listen this one.

Wow! Thanks very much for this!

Thanks so much, Nick, I remember hearing one of these transitional bands in NYC in 1974 (possibly 75). This was at the re-opened Five Spot. I don't remember the other band members, and if anyone does know I'd love to find out. I was unprepared for the impact of Ulmer, and I've wanted to revisit this period for a long time. The music makes much more sense to me now than it did then.

Links are dead :( Please re-up. Thanks.

I too would love a re-up, as I missed it first time round. Thanks.

And thank you from me too, Nick

thank u nick for re upping this one.i also have been into ornette's transitional periods.
this one looks great
robert

Excellent, must have missed this first time round !! Most appreciated.