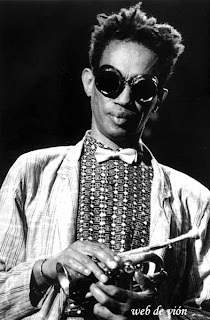 Responding to another request, from blogger chum Sotise, this is a set of three separate radio broadcasts, featuring Don Cherry with a large band, in a smaller setting and finally with a smaller jazz group.

The first set, from 1971, has a large group setting with Cherry playing with Danish musicians. Listening to it, the Eastern influence is quite noticeable, whether it is from Indonesian gamelan or Indian classical vocal and instrumental traditions, but still mixed in with the Western jazz heritage. It is somewhat reminiscent of similar experiments with John Tchicai and Cadentia Nova Danica, George Russell and the Jazz Composers Orchestra Association taking place at the time.

The second set is a collaboration with Terry Riley, well-known for exploring minimalistic, drone-based sound suites, again very often with a strong Eastern influence, and Riley has continued to work with Indian musicians up to the present date, including the concert I attended a couple of years ago. This music was made around the time of the "Rainbow in Curved Air" lp and on the lp as well as here Riley switches between soprano sax and organ, one side for each. Cherry and the group stays close to the pulse of the pieces, resulting in a very intimate, low-key set. Special! According to the info file, Cherry and Riley had met in Sweden a few days earlier, and Riley invited Cherry along for this session. Apart from a short rehearsal the night before it was the first time they played together. The session took place in complete darkness, the musicians seated in a circle on the studio floor

The final set, a fairly straight bop date, was recorded in Stockholm back in 1965. Mostly with visiting musicians, this is a lively set of fairly short tunes, providing a counterpoint to the introspection of the former set. Listening to all three sets jointly, you do get a sense that that Cherry was slowly moving away from the jazz idiom towards exploring contacts with non-western musical traditions. That tendency was to continue with Codona which made several albums for ECM and into the 80s.

Thank you very much for sharing. Three very different settings; but quite wonderful music in each case. I had some versions of these recordings in 128kbps mp3, and considering the quality of the music I am delighted I'm now able to up the quality. These years Cherry was based in Northern Europe were enormously productive for Cherry, and he always seemed to give as much as he took in each musical encounter.

this looks pretty cool. thank you for posting it for everyone...

K-Thanks so much for the request fulfillment..Cherry is my absolute favourite bar none... much appreciated ..cyber hugs to you!
oooo

Thanks, this is great.

I've been enjoying this Don Cherry a lot over the past couple weeks. Thanks for the post!

Excellence. Thanks for this and all the others!

i without a doubt adore all your posting style, very exciting,
don't give up as well as keep creating in all honesty , because it just truly worth to follow it,
impatient to look at even more of your own posts, have a great day!

this is really great

I haven't listened to this for a while, but put it on today and am really excited about "The Whole World Catalogue." Does anyone know anything about that song? I'm especially curious about its title.

Thank you for sharing these recordings. And thanks for making lossless available, which is always appreciated.

really enjoying this, especially the pieces with terry riley, thanks!

If I might humbly ask for the re-upment of this recording, to hear don and terry in particular! Best wishes.

would love a reup plz

A re-up would be great. Don Cherry is not regularly featured here.

Hi Kinabalu
I have the Riley Cherry session that is great but I never heard the rest of the session, a re-up of all of it would be absolutely nice.

It looks like I have not got the flac files anymore, but here are the sessions in high-grade mp3 instead:

Thanks very much for the re-up. Interesting session that show the evolution of Cherry at this time.