Clarinet Summit In Concert at the Public Theater Vol. I/II 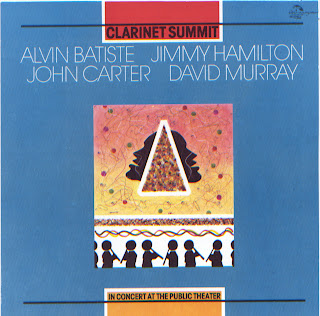 Recorded live in Spring 1981 at the Public Theatre, NY

As a contribution to the new discography blog for India Navigation I thought I'd post this great CD which combines volumes I and II of Clarinet Summit. This is pretty much a clarinet version of the saxophone quartets which were in vogue in the 1980s. Led by John Carter, a featuring Ellington alumnus Jimmy Hamilton, in/out player Alvin Batiste, and David Murray who had taken up bass clarinet few years before.

The programme is an interesting mixture of original compositions from the group members and Ellington originals. The CD features sleeve notes by Stanley Crouch (doing a bit of historical contextualisation) and John Carter (explaining how the date came about). Crouch empaphasises the New Orleans origins of jazz clarinet, evoking Bechet and Barney Bigard as precursors, and rightly says that the music chosen owes much to the success of the performances. Honeysuckle Rose highlights Batiste and Hamilton, and Murray solos on his own Sweet Lovely. The lengthier tracks show John Carter's writing and arranging off to great effect, and are excellent examples of why I rate him as one of the master's of jazz.

Given the long careers of the other three, the much younger Murray acquits himself superbly, and without hesitation. The group practiced for three days before, but they sound completely at ease with each other. This inter-genreational approach was to be a common feature of Murray's later bands.

The recording stands up well after over 25 years, and it is one of the reasons India Navigation was such a collectable label. You'll find a full discographic listing of the label at http://indianavigation.blogspot.com/

I would not have known of a musician such as John Carter had it not been for this blog (and Huppes & Hyalites when it was active). This looks excellent - thanks very much.

thanks ..only ever heard their black saint album, this looks a treat.

Thanks for this gem!
I just love clarinet.
renrew

I picked this up used on CD a couple years ago, and it's been one of my absolute favorite jazz CDs ever since.

Oh man, this is beautiful.

YES! Been trying to find this recording since I first heard it nearly 20 years ago. Thank you for putting it up! And for so many others, too.

Wonderful Share. The Clarinet (especially the bassy ones)Is My Fav Woodwind. Thanks!

Damn, never heard of this.

Thank you; I am very fond of The (Black Saint) Clarinet Family live in berlin; one of my favourite cds.

Well, THANK YOU, probably the best CD in my world currently.

Years ago I read a review about this album but never had the chance to listen to it. The review was weird but the album is great. Critics are crazy. It makes me happy to hear this one of a kind clarinet quartet show.
Amazing!

any chance for a reup of this?

Beautiful!thank you very much for re-upping this gem.