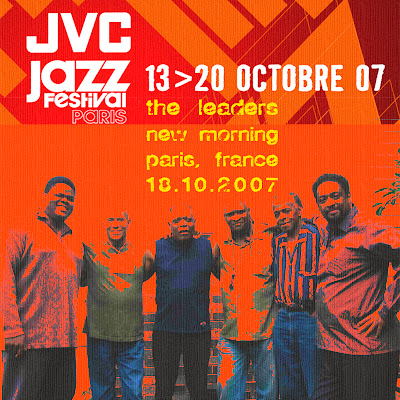 The muti-instrumentalist reedsman, Chico Freeman formed the first version of the band he called The Leaders in the 1980s. The other horn players were Lester Bowie and Arthur Blythe. They made several recordings, one of which, "Slipping and Sliding" is still available for download on fredito's excellent blog site http://huppeshyalites.blogspot.com/ (you'll have to search for it).

The Leaders have recently been reformed with the lineup on this concert, recorded in Paris (one of a grand tour of Europe in October and November). I'm not familiar with Bobby Watson, I gather he started his career with Art Blakey and later formed a band called Horizon (which I know nothing about). Eddie Henderson played with Herbie Hancock's band for many years, and has since played with just about everybody around. Of the rhythm section, I guess the best known is Buster Williams, having played with Miles Davis, Chick Corea, Elvin Jones and a whole bunch of other greats, as well as leading his own bands.

The music on this recording is really red hot. Stylistically, I guess you'd call it hard bob (or post bebop). I don't really know what these labels mean.

The recording is taken from a satellite broadcast, courtesy of seeder "unclewolfi".
I have posted links for both flac and mp3 VBR 0. Links in comments.

I see massmirror have added another host to thier usual list - fastuploading.

If anyone manages to get past their "captcha number", they've done better than me.

thanks for all
the great stuff
lately. much appreciated!

Thanks for this. I've been listening recently to the leaders slipping and sliding disc, so this is well timed for me. completely different lineup (except for Freeman obviously), but sounds like a good one. just saw steve wilson in concerts last week with renee rosnes too, so looking forward to hearing this. thanks again,

ooops. I misread the list of musicians. bobby watson on alto, not steve wilson. still sounds good. haven't heard anything from watson in ages.

Listening to the music as I post!! Funky, swinging, good-feel contemporary jazz..Many thanks for putting this up..One correction though..Judging from the photo the bass player is Cecil McBee and not Buster Williams.

Oh yes and another correction for those who care!!! Billy Hart on the drums of course...Still listening and enjoying this wonderfully passionate music!

boromir, the track 1 named "Deep Pockets" & track 2 "Evolution". Two themes from the record "Spirits alike". I think sasha got reason, the bass is Cecil Mcbee & drums Billy HArt. Very thanks for the post!

First of all my compliments for this great blog, finally emphasizing free jazz as well!

These links are dead (Leaders, Live in Paris). Could you re-up them with rapidshare?

Reup please!
Many thanks in advance!