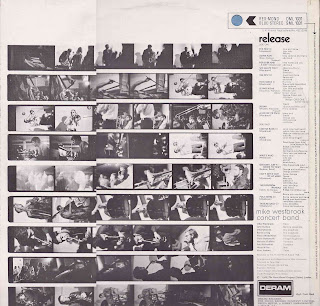 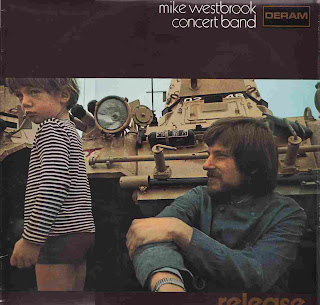 BOROMIR SAYS ' For sol then, how about Mike Westbrooks's Release, which is about the only one of his that's OOP, It's a longtime favourite of mine. ITS A VINYL RIP,at 192 kbps (that was the norm a year or so ago).
Mike Westbrook Concert Band - Release (1968)
http://rapidshare.com/files/45382422/Release.rar.html
personnel
Mike Westbrook: piano John Surman: Baritone sax Mike Osbourne: alto Bernie Living: alto Nisar Ahmed (George) Khan: tenor Dave Holdsworth: trumpet/flugelhorn Malcolm Griffiths: trombone Paul Rutherford: trombone Harry Miller: bass Alan Jackson: drums
Most of these players went onto well-documented careers, but there are two enigmatic characters among them:-Bernie Living, who has a style similar to Kaoru Abe, and George Khan, who, to me, has more than a passing resemblence to Albert Ayler. I think both of these guys became lost to rock - Living was last heard of in a Manfred Mann band, and Khan in a jazz rock group called Sold Gold Cadillac. I can find no trace of either of them after the early 70s. What a waste of talent !
thanks for this b,it looks great!!
buy mike westbrook albums, hes one of the major composers in postwar jazz, and the british scene.

thanks for another fine slice of (jolly old) Brit-jazz

(glad you got your bandwidth back)

glad you are enjoying these fine british classics.
many thanks to BOROMIR for this, it is superb,indeed stunning.

What an amzing blog. I just found you today, and I'm simply stuinned at all the great music you're sharing. Thank you.

Thanks for posting this!

Hi,
Could you please repost this one?
Thanks in advance!

What a splendid choice!

I got this off Soulseek. It's a slight upgrade from the original posting at 192 kbps. This one is at 256 kbps, but it sounds just fine. And the music is marvellous!

kinabalu, thank you very much for the reup of this treasure. Looking forward to it. What a line up!!!!

Kinabalu - wow remember Alan Wakeman raving about this at an MU workshop many thanks if anyone has Love Dream and Variations as well that would be amazing.

thank you for making this available.