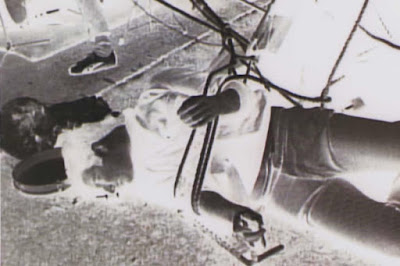 Script and directed by Hanne Boenisch


Got this documentary from John Tilbury on Wednesday, 29 April 2009 at the Gasteig in Munich, for the first time.
We had invited him for a concert / lecture. During his lecture excerpts of the film were shown.
Afterwards he gave us two or three copies of the DVDr. He added we should 'spread it'.*

Hanne Boenisch has died only some weeks before John Tilbury's concert in Munich.


Around 2015/6 I talked with a friend about this film. He asked wether he could watch and maybe even use it for his lectures at a Munich high school.
I readily agreed and promised him a copy of my copy. But - alas - I did not find the DVDr. After several attempts to locate it I gave up.
It seems I had lost the film during a relocation some months before.
Later that year my friend made some inquires at the BR (Bavarian broadcast) as to wether they would loan him the documentary.
But it was revelead to him that they discarded or destroyed the film!

To my delight I got it again some days ago.

And following Tilbury's idea about spreading this rare documentary I'll offer it here.

Additionally I would like to give the interested reader a link to an interview with John Tilbury.  This conversation was conducted after his book "Cornelius Cardew - a life unfinished" was published.
It is a fitting companion to the documentary - of course to read the book would be even better.

(Beware ;-) this film is only for bi-lingual viewers.
Cardew is heard for the most part talking in German, which he does quite fluently.
But there's a good portion of English to be heard during the 45 minutes .

* it should be clear that it is my responsibility to post the film here - Mr. Tilbury never asked or even encouraged me to do so.

Maddeningly, 1fichier doesn't seem to work where I live, so I'm missing out on a lot of wonderful stuff that appears here. I hope that this becomes available somewhere else somehow. I've been wanting to see it for decades.

@Joseph Zitt, perhaps I have two ideas how you would be able to download the files.

First you could add a VPN to your browser. This one is for free and as far as I know a reliable add-on. No problems so far!
It helps me in most cases to download from websites previously unavailable for me.
https://touchvpn.net/

Or you could use a proxy-site. Haven't checked it for myself but I know some friends and acquaintances who used it and it worked.
https://www.proxysite.com/

Both methods seem to hide your location (I'm no expert - so my explanations might be somewjat crude) from the websites.

Hope this will help.

Thanks very much for this highly interesting film! The quality is excellent, given its age and nature.

Since john Tilbury told you to "spread it", I think you have the OK to do so, even though he didn't particularly say you might post it on this blog. I'm very grateful that you did - and to the involved artists for their openness in creating the music and this film!

Here is a smaller version on MF: