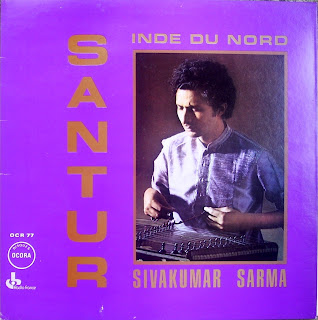 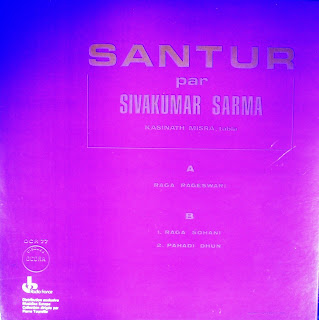 A very beautiful Record by Shivukar Sharma, Master of the Santur, this one has never made it to Cd

i guess that'll be my first meeting with santur))
Ocora's stuff usually works well for me, thanks much!

Ah, Shiv Kumar Sharma! Thanks Sotise for posting this one! I'm the the biggest fan of
Pandit-ji and I believe he's one of the very few real treasures of mankind still alive and well.
Besides being such a divine musician, he is a humble, soft-spoken and sweet man and you can't
help loving him. I discovered him way back in 1971 upon listening to George Harrison's epochal
masterpiece “Wonderwall” (one of the ten albums I would take with me on the infamous
desert island) and although I had just quit wearing short pants, I immediately realized
that he was as big as, say, Ravi Shankar or Baba Allauddin Khan.
If anyone of your valuable readers has the slightest interest in Indian classical music (which
has many things in common with jazz, by the way) here's a jaw-dropping performance of
Pandit-ji in Paris playing with his long-time partner Zakir Hussain (yes, THAT Zakir Hussain,
the son of the great Alla Rakha). They play a Gat in Teental on Raga Bhimpalasi that will
leave you speechless, and happily uplifted for hours. Promised. Such is the power of the
greatest Indian music. Here's the link, and thank you again for this marvellous album that I only had in a scratchy mp3.
http://www.youtube.com/watch?v=AF5LuibUpS0

Arvin , good to see you here !,thanksa for your thoughtful comments and the video link , superb...take care
S