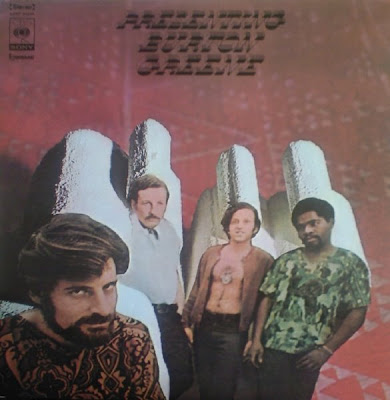 A christmas present from anonymous ..left in the comments to the previous post.
Dan Warburton-It's about time Presenting Burton Greene was reissued!

Burton Greene-Yes, it's enjoyed much more creative life in the cut-out bins than it ever did on the shelves! You know, that was the first time a Moog was used on a jazz record. I first met Robert Moog in 1963 at an electronics show in New York where he was running around saying "does anybody want to try my instrument?" I went up and introduced myself: "I'm a piano player, I can use that.." He said, "I can't offer you any money, but my wife is a great cook and if you feel like coming up to Ithaca, you're welcome to stay." Well, man, I hadn't eaten in a month so I said, "Erm, yeah I think I have a little free time at the moment..!" (laughs) and I went up to Ithaca and had a ball. And after that I was the synthesizer expert..! I tried to work a deal with Norman Seaman to do a solo Moog concert - that was even announced on my first quartet record - but he was losing money and it didn't happen. Anyway, John Hammond at Columbia had heard about that. "You're the cat who plays the synthesizer. Burton, you've got to add the synthesizer to that record." The record was already done, but he said, "we'll pay you to work on the synthesizer." The magic word. Five hours at $100 an hour. Normally I don't drink, but I remember that day when I went to the studio to get that extra $500 out of Hammond, I drank a quarter bottle of Scotch. I rolled in the studio like Napoleon (laughs). There were wall-to-wall Moogs in the studio and five assistant Walter Sears engineers each getting $80 an hour to help me create. They said: "What will it be sir?" I said, "I'd like a Sine Generator 17 to start with, please. 17B." "OK, sir, yes.." (imitates the noises of a Moog) I said, "Hmm it's a little thin.." They said "what about a BX.." I didn't know sine from sawtooth! Hammond was like, "that's my boy!" We ended up with all this weird shit and had to find a place to put it. I said to [drummer] Shelly [Rusten]: "There's a little part of your solo there that we can.. enhance." He said "don't you put that shit on top of my solo, man!" (laughs)

Thanks for the Xmas gift, Anon / Sotise!

glad you liked it, more rarities on the way, stay tuned

Anon,would you like to make your own posts here on the board...i could send you a formal invitation..but you'd need a blogger account....alternatively sending links by email..might be better than simply dropping them in comments though thats fine too.
contact me @...dipmong@hotmail.com

Been looking for this one for a while. Thaks!

Thanks for this important session. Mr. Greene is still active with recent releases on CIMP. Also check out his ESP recording with Marion Brown ('66) and his BYG-Actuel recording, Aquariana, from '69.

Wow! No internet for a few days & when I come back a torrent of great stuff. Commenting here b/c I'm particularly excited about this one, never having heard of it before. I haven't listened yet but I'm very curious to hear Lancaster in this grouping. He seems to be all over the place in the various records I've heard him on...

Saw him last year, a great musician and gentleman.

That live Burton Greene LP on ESP is one of my favorite free jazz albums: free improvisation, but thoughtful, not pointless noodling and squealing (one of the major detriments of that era, even occasionally for legends and heroes like Ayler and Trane).

really looking forward to hearing this one. thank you so much for sharing.

thanks, sotise!! burton greene is wonderful, be it his free past or his whole present (klezmokum, f.e.).

unfortunatly this is already gone

I am not lucky enought, the new rapidshare rules are very narrow, I'll try till when I will be able to DL it thank you Sotise

this has???? to do with not being
in a public folder??

love everything still hoping
the john surman elvin jones
can be acdcessed. i keep trying
for days but no luck yet

rapidshare is a pain these days hey?
robert

but the media fire link worked for 320. i am fine with that.
but in terms of other folks that rapidshare flac link still had the same message. i look forward to hearing the 320 of it. its downloading now
i am a big byard lancaster fan i used to see him in boston with jr mitchell.
robert

They may indeed have been moved to another folder, but it doesn't look like the contents of that folder have been publicly shared. That goes for other earlier file postings as well. In other words, try again.

At Rapidshare I get the message "The download for this file has not been enabled. Only the user who uploaded it, can enable the download option."

OK. This should work:

Hello
is it possible to update and re-up? Thanks in advance

Thank you Kinabalu. I have never heard completely this album. It is a masterpiece. After Marion Brown on his first record, Byard Lancaster was another alto with who Greene was matching perfectly. The overdubs on synth are great too and all the compositions are superbe. Should we send the link to clean feed's producer to show them what is a good record?

Kinabalu, thank you. This interview excerpt is quiet nice and makes me smile. Wondering wether the music will make me smile as well.
But at least I shall give at listen this time.