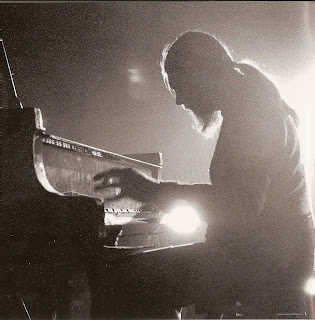 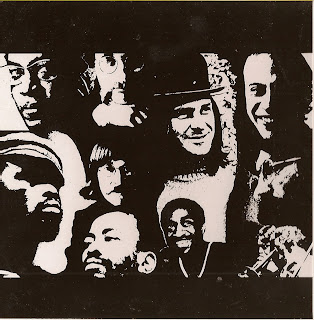 There's been an encouraging spate of Chris McGregor and Brotherhood rereleases lately, some of which has been featured on this blog before. Just around the corner is a Blue Notes box set containing all of their four releases on the Ogun label. One of them has also been posted here previously.

But what's on offer here and now has not been officially released yet at any rate. It's an excerpt from a concert inside Balver Höhle in Germany in 1972.

The info given is as follows:

The first three pieces are announced as such by the radio presenter, but "Call" sounds uncannily like "Ismite is Might" off the Willisau album and features most likely Nick Evans on the trombone. The second piece is "Mra" leading into "Andromeda". The third piece is "Do It" leading into "Think of Something", the latter featuring Mike Osborne on alto, Gary Windo on tenor and either Mark Charig or Harry Beckett on trumpet. The last piece is quite clearly "The Serpent's Kindly Eye", also on the Willisau album (which was the first ever release on the Ogun label).

The sound's fair on the first three, but a bit grimy on the last, though. The band is at its ramshackle best as ever. Some may find the BoB cacophonous at times, but to these ears it's beautiful cacophony.

Mp3 and flac versions in the comments section. Another golden dime.

Please note that the flac files have to be unpacked separately. This is because RapidShare allows for files of up to 200mb for free users (and more for premium users). By packing in more than 100 mb per file, I'm reducing the number of downloads from three to two. Hopes this makes sense.

A great post! And a great band, lovingly remembered after so many years, and still missed. Thanks K!

Outta sight. Thanks Kinabalu. You are a man of exquisite taste. But you knew that.

Many thanks. Very much looking forward to this.

Thanks for this. Had the good fortune to find a promo copy of the McGregor septet Up To Earth yesterday. Surman, Parker and Pukwana are a dream reed section!

fabulous--can hardly wait to tap into it!

Here's the info I have (thanks for the fixes with the setlist!) - any more insights on the line-up? I think the seed on dime came without any info:

Note: #4 prob. from different broadcast (has J.E. Behrendt announcing, while #1 and #3 had different announcer). Maybe #4 is from a different concert.

thanks for the additional info.

There is a second tenor? But I do think the solo is by Windo, but possibly someone might hear differently?

The fourth track sounds as if it is from a different source (which might explain the huge variation in sound quality). I haven't heard Behrendt's voice before, but I do of course know about him, so that might be another indication of there being two different sources.

Hello All,
the record of this BOB concert was not in the Balver Höhle, it was on the Altena Castle. I was there in 1972 and got an double lp with a lot of articles about BOB in an added booklet, but theres bo music on his lp from the concert.

The fourth peace was recorded next day (sunday), because Dudu Pukwana misses his horn on saturday. Thats the reason why he BOB plays again on suday.

thanks for that clarification. I realised, after a bit of research, that Balver and Altena are indeed two different villages/towns, so it couldn't be both, but no way to know which one was the correct one.

May I ask what was on that double lp? Their two first records?

Since this was a radio broadcast, there must be (hopefully) some tapes lying around still.

There is a record of that altena72 festival (where BOB played on two days 24/25.6.1972). the booklet of this record prays the brotherhoods as the highlight of this festival, but there is no musik of BoB on the record (only a radio broadcast exists). I think the radio broadcast is this what you mentioned as a rapidshare file.

thank you much. I look forward to hearing this.

Cool story as for me. I'd like to read something more concerning that matter. Thank you for posting that info.

Could somebody, please, reup this one? The links are long gone.
Thanks.

The first three pieces of this bootleg were reissued as part of an still available box-set.
Call 8:44
Andromeda 9:13
Think Of Something 14:19
https://www.discogs.com/Various-International-New-Jazz-Meeting-Burg-Altena-1972-1973/release/9043491