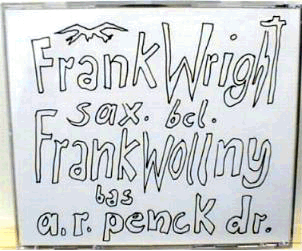 Following Pierre's posting and jumping ahead in time, this is in all likelihood the last extant recording of Frank Wright. He died on 17 May 1990 and according to the information I've got, this was recorded on 4 March.

It was made at the Galerie Holm in the South German town of Ulm on the occasion of an exhibition of A.R. Penck's graphical works. It's quite obviously an amateur recording, under less than ideal conditions and with quite a bit of chatter in between and during tracks.

Checking the Penck discography at http://www.bb10k.com/PENCK.html, it appears that there is a cd release of this date and the above cd covers are taken from that release. I haven't been able to trace that release on-line which presumably would have sounded much better.

At this point, the band was down to Wright on sax and vocals, Frank Wollny on el-bass and Mr. Penck himself on drums. I've never been a fan of Penck the drummer. I find his style cluttery and clattery, and Wollny does a fair enough job on bass. So this is really for Frank Wright completists, but who isn't?

Quite a reverby recording, no known tunes except track 4 which is "Jerry", somewhat of a Frank Wright staple. It first appeared in a trio format on "The Earth", his debut album for ESP back in the sixties and later in a quartet format with piano on "Shouting the Blues", an album released in France in the late seventies.

Not much point in doing a flac of this one, imho, so only high-quality mp3s in the comments section.

The next one will be better, I promise!

I've put this one on Divshare to allow for one single download. The file is a bit in excess of 100 mb.

A. R. Penck-Concert in Ulm

Yes, that's the one.

There is another Penck recording with Frank Lowe (and a proper drummer) on the now defunkt "brewing luminous" blog, and the link's still active:-

The Be Cool in München (see baromir link) was recorded at Tape Teatre, München, 1985

divshare?
"This file is unavailable until Aug. 14, 2008 because the uploader's account has reached its download limit. You can access it immediately with a DivShare Personal account!" :-(
and we must register to get link.
forget it!