Alexander von Schlippenbach - a threat for the US?!?!? 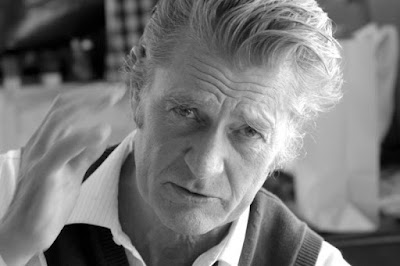 Want some real surreal for the week-end.

Alexander von Schlippenbach - familiar to our readers and listeners - should have been in the US for two concerts with Evan Parker and Paul Lytton.
He was invited a.o. to play in NY, Chicago and Knoxville, Texas.
(scheduled US tour from 18.-28.March)

But when applying for a visa / work permit for the two concerts he was rejected by the American embassy in Berlin.
Not only that he wasn't allowed to enter the US but he hasn't got back his passport at least until March 24 .......

The "New York City Jazz Record" did a front-feature for AvS on basis of the planned concert in NY. But sadly this will remain a more theoratical experience for all interested listeners in NY and other locations in the States.

Asking myself what could be the basis of such a "decision" - if decision is the real word.
Fuck-off?

this is not a single incident - musicians comment on this problem here (u.a. Wolter Wierbos and Thomas Borgmann, mostly in German):

In the USA, there have long been issues about work visas for foreign musicians. It's not that the government thinks they are terrorists, it has more to do with the potential loss of work for US musicians. This policy treats all players as equal, without considering whether or not they are doing something unique.

An extreme example would be that Tuvan throat singing is not something many Americans can do, so having Tuvans come to the US to perform is the only way most people would be able to hear it live.

Jazz represents more of a problem, because there are plenty of jazz musicians here and not a lot of gigs for them anymore...which is why so many US players go to Europe and Japan all the time to earn their living.

@Enossified
it was a joke, it is very strange for me to notice how many people don't understand what we call in french the "second degree".
Are you sure that the american government is interested about the job of the musicians? I have the experience of living in a country that have invited many american musicians since the early 50 until now, I have meet some of them and none of them explain that the american administration was interested in there living and artistic conditions.

Thanks Lucky for the link.

@ enossified - "...which is why so many US players go to Europe and Japan all the time to earn their living."
This seems like an 'old' story. American Jazz musicians already came to Europe for that reason decades ago. There are a lot of statements by American Jazzers which show that without the "old" continent they would have had a much harder living.

And if someone is a Jazz musicians than he isn't replacable (almost by definition) or he isn't active in Jazz!?.
This argument is surely valid for AvS.
But bureaucrats aren't famous for such more subtle differences.

Curious story. Did Parker and Lytton also have their visa applications rejected? Anyone knows? Personally speaking, under the current regime I'm much less keen on visiting than at any time before. I had the chance of seeing Schlippenbach with Monk's Casino twice and Parker once, but, alas, not in tandem. A jolly good time was had on each occasion.

Hi Kinabalu, got no information about Parker and Lytton insofar. This message was forwarded to me from Intakt Records via the editor of the 'Jazz Podium' (Germany's oldest Jazz magazine).

Very upsetting.. And not the first time Europian musicians have had these issues. Paul Lovens is right!

There are similar policies in Britain and elsewhere in Europe concerning visiting musicians from the US. This is why they sometimes perform with musicians from the country in which they are playing, on occasions as support. It goes right back, as you can hear on many live recordings from European gigs in the 60s, 70s and 80s. I don't know the current details - I think it might depend on grant or similar assistance and work visas can have conditions attached - and it may differ from country to country. Of course, it's often simply just cheaper to play with local musicians. Many old Blues legends tour Britain, usually with excellent local players.

Irrespective of the country, such policies are usually applied in a blanket fashion, and I doubt AvS has been singled out - he's just a European jazz musician. And of course, a great many things are messed up by civil servants (public administrators and officials). Twas always so.

@correct silence - I think the word you're looking for is "irony", and I'm pretty sure it was understood.

Something about this story makes me feel like I'm living on the wrong side of the Iron Curtain. I hope I live long enough to see these types of barriers and walls come tumbling down once again. Until that day comes, it'll be my honor to smuggle and disimilate as much 'unapproved' music, writing, and artistic expression in all its forms as I possibly can

I can’t help but feeling that all this speculation is a little premature. I know it can be inconvenient to let facts get in the way of a good story, but at present all we know is that AvS was refused a visa (presumably a work visa not a visa to visit) and that there was some delay in returning his passport. Other than humorously, there’s currently no basis to say that he’s been perceived as a threat to the USA, or that it’s all part of some Soviet-style clampdown and a threat to free speech, though I appreciate some find that very appealing, portraying themselves as righteous freedom fighters. Perhaps they are also being ironic. It’s most unlikely Schlippenbach’s seen as a threat; after all, he toured the US with Parker and Lytton in 2003 without, so far as I’m aware, any problems. The liner notes to “America 2003” make no mention of such matters.

As has been pointed out, for many years the USA and some countries in Europe (and I think, Japan) have operated restrictive practices when it comes to foreign musicians, the general justification being that domestic musicians should not be put out of work, and/or such visits should be used to promote them also. I accept the wisdom of such policies is debateable, and they probably differ in detail and change from time to time, but until we know exactly what happened, wouldn’t it be better to hold fire?

@ Colin - of course we do not know the complete story. I doubt anyone really believes that AvS is being suspected as a terrorist / security problem by the US authorities.
As one might see from my notes to this post I see it with humour peppered with a good dose of sarcasm.
Although we arguably live in a society of the spectacle I support your advice: "... to hold the fire..."!

My earlier comment wasn't meant to excuse the US government's behavior at all. I can recall cases where they had denied visas to Canadian musicians! The rules get interpreted by bean counters who may not have any insight into the individual cases. Someone may have denied it because 232 Germans had already gotten work visas this year or some similarly foolish reason. The policy was pushed for originally by the USA musician's unions many decades ago. Like so many government regulatory issues, it's way too often heavy-handed and has not been revised to reflect changes over time.

@ enossified, didn't have the impression you would excuse the US government with your comment.
Cheers

To my knowledge, France have never refused visa for foreign musicians, from the fifties to now many foreign musicians regularly comes to France. Ten years ago I was contributing to organisation of Indian music concerts and the musicians always get the visa. The only case of problem that I know is Clifford Thornton who have been forced out by the french government by request of American service security because he was member of the black panther. We still laugh of this story now.
If I wrote the word "terrorist", it is because actually in France we have some strong protest against our government and the members of this government use easily words like "terrorist " or "dangerous for the state security". SO it have become a sort of joke between some french. If you see one of your friend who park his car not perfectly you can tell him that this attitude is a threat for the security of the country.

I choose my words carefully: I said some European countries operate, or have operated, restrictive practices, not all. It may be musicians' unions who lobby for such things, as in the US.

I understand what you're saying about the word "terrorist". You were using it ironically and didn't really mean it.

Some related informations: in 1955 "The MU and the AFM agree an exchange agreement which allows some American performers to visit the UK if an equal number of British musicians are allowed into the USA."

As fas as I know this agreement between the MU (Musicians' Union - UK) and the AFM (American Federation of Musicians)lasted far into the 1960s.
For that reason f.e. Ornette Coleman could not play as a Jazz musician in 1965 (...jazz musicians were under a quota arrangement but classical performers were exempt) but only as a composer of serious music.
Other musicians without the credit of being a composer fared less well.

I'm not sure if restrictions in that form still exist, but I remember seeing Ornette's Prime Time some years ago on a British tour, supported, for about four numbers, by Tommy Smith's band. I suspect it was a condition of the tour that local musicians provide support, possibly due to subsidy, maybe as a condition of the work permit.

I went to the show at Roulette and Matt Shipp substituted for Schlippenbach. Still a great set of music.

Evan Parker has a different type of Visa. His expires in May. He plans to be in NYC in May and do a few shows while he still can. He and Ned Rothenberg played with the Master Musicians of Jajouka on Saturday.

It was definitely disappointing not to get the chance to see Schlippenbach.

I have heard many theories about why the US government has been keeping musicians out. I do know that musicians I have been working with have told me not to list their name in any advertising as apparently if you bring an instrument into the US, they check the internet to see if you are playing. If you are, they don't let you in.

We need to change this situation. We have moved away from Cultural Exchange to the present situation where everyone is on edge when they try to come here. A lot of musicians, including Paul Dunmall have told me they won't be coming back.

It now seems that the visa problem was as the result of a strike by embassy staff, which would certainly explain the late return of Schlippenbach’s passport, so that he was not seen as a threat, or the victim of US policy towards foreigners, or restrictive trade practices. It was the unfortunate consequence of industrial action, which doesn’t have quite the same ring to it. No opportunities for virtue signalling there.

Thanks Colin for the update.
Similar to the situation at Berlin's American embassy the Munich passport office has too little civil servants (not yet on a strike). Therefore a lot of people can't go into their already booked holidays.
Flights and hotels have to be payed nonetheless. Same problems for businessmen who want to work abroad. In one case the new passport was applied for three months in advance - but obviously the time frame was too short.
Usually 8 weeks are more than sufficient in Germany.